From Tree-Sitters to Water Protectors: Meet the Women On the Front Lines of Eco-Activism 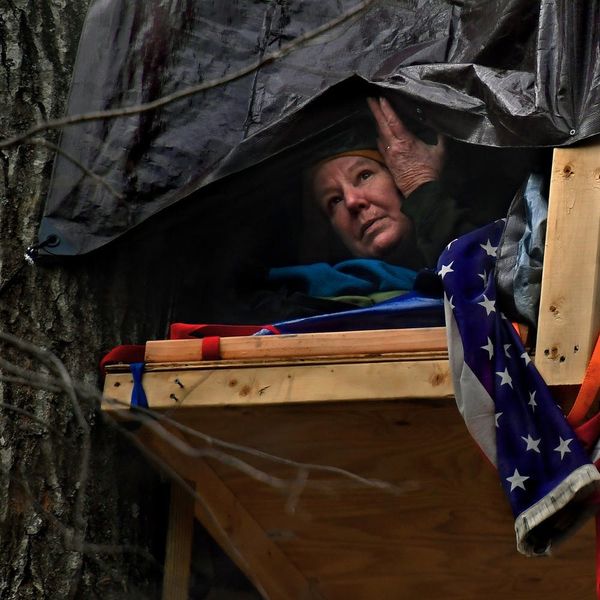 “Well, I’m currently based in a tree.”

That’s how one anonymous 22-year-old eco-activist with the group Appalachians Against Pipelines answered when we asked where she’s working. The activist is a member of a pipeline resistance group called Appalachians Against Pipelines, and she’s camped out high up in a tree in the Peters Mountain area of Jefferson National Forest in West Virginia. She’s one of a handful of activists who have been camping out in located within the National Forest since February, part of an effort to stop a pipeline from being constructed there.

There are many other activists on the front lines of direct action eco-activism projects, and a great number of them happen to be women. These activists are dedicated to not only protecting the environment but also empowering themselves to keep environmentally destructive pipelines out of their communities.

DOG HALTS PIPELINE – Early this morning, a particularly hairy protester erected a new tree sit on Peters Mountain in the path of MVP’s pipeline construction. The protester howled that he is especially excited for visits from the Ham Sandwich Brigade. https://t.co/BeILeCrRnF pic.twitter.com/PTgfRhDp4O

As proposed, the MVP will be a 303-mile-long natural gas pipeline that will run from northwestern West Virginia to southern Virginia. According to the Roanoke Times, the pipeline will cost approximately $3.5 billion to build. The Federal Energy Regulatory Commission (FERC), the federal organization that has to approve inter-state pipeline proposals, stated in a 2017 environmental impact report that the MVP would cause minimal damage.

Environmental groups in the region disagree. A senior attorney with Appalachian Mountain Advocates told the Roanoke Times last year that while the FERC’s report noted there would be some damage to forests, it failed to note the potential for what they described as “catastrophic erosion and soil loss.”

To protest the construction of the MVP, local farmers in Virginia have set up tree-sits to protect their farms, trees, water sources, and soil from destruction. A mother-daughter team of tree-sitters including Theresa “Red” Terry (pictured above) resisting the pipeline are currently facing criminal charges for refusing to abandon their trees.

Another group, called the Three Sisters Resistance Camp, made a camp in Virginia along the planned construction site for the Atlantic Coast Pipeline, another natural gas pipeline set to be built in West Virginia, Virginia, and North Carolina.

The 22-year-old activist protesting the MVP tells us that she feels direct action against pipelines is vital for what she calls “Earth liberation.”

“I think the word ‘revolutionary’ can scare people away,” she tells us, “but it is revolutionary to resist the forces that seek to steal from us. In this case, MVP LLC [one of the partners behind the MVP].”

She adds that direct action can have far-reaching positive consequences: “Through that resistance, held by a wide variety of communities, comes the creation of a better world. A safer, more compassionate future.”

There have been other major protests against pipeline construction in the US recently, a movement that was brought into the spotlight and reinvigorated by Indigenous activists two years ago. The federal government approved the construction of the Dakota Access Pipeline (DAPL) in the summer of 2016, despite vocal concerns from local Indigenous tribes. Activists from these tribes, called water protectors, set out to prevent DAPL’s construction. The first resistance camp was directed by a woman, an elder of the Standing Rock Sioux Tribe and a historian named LaDonna Brave Bull Allard.

Maybell Eequay Reiter, a 23-year-old Indigenous activist who lives in Minnesota, was among the water protectors present in Standing Rock.

“For myself and many other indigenous people, our lives revolve around our fights for justice and the protection of our land, water, languages, ceremony, and people. This has been our fight since colonization reached our ancestors,” she tells Brit + Co.

Water protectors argue that the possibility of an oil spill from the pipeline put their community’s water supply at serious risk and that pipeline construction illegally violates Native sovereignty rights. After operating for only six months, the DAPL leaked five times, according to a 2018 Intercept report.

Indigenous resistance against DAPL drew international attention not only because more than 1,000 water protectors and activists camped out for months on end, but also because Indigenous activists, known as water protectors, were met with mass surveillance and physical abuse by police and private security force TigerSwan. Reiter’s protest experience involved spending a few months living in a traditional Mongolian yurt with no electricity or running water during a brutal North Dakota winter.

“During my time there I experienced some of the best and worst moments of my life,” she tells us.

But there were also traumatic elements: “militarized police forces, chemical warfare, and leaving a sweat lodge [to find] a stack of bulletproof vests outside of it with news of camp being raided by said police forces.”

Water protectors endured police blasting their camp water canons in freezing temperatures, and some were attacked and injured by private security guard dogs.

Because of her experiences with violent law enforcement at Standing Rock, Reiter says she now suffers from post-traumatic stress disorder. “I find my body going into panic mode when I hear helicopters or small airplanes, or see police officers or militarized vehicles,” Reiter tells us.

She adds that the trauma activists experience should be discussed more than it is now.

“I feel like this is something that isn’t talked about enough because many of us feel like if we aren’t out there fighting then we aren’t doing our job to protect. I am trying to teach myself that taking care of myself and working on my healing is a form of activism in its own because when I heal myself it makes it easier to help heal the collective.”

As massive corporations continue to seek additional pipeline projects around the country, more and more activists are taking a stand in the form of direct action. Actions against pipelines in recent years have had a strong showing of women at the front lines, from Standing Rock to the treetops of Virginia. Though they often do not receive their due recognition for the risks they take on behalf of their communities and the earth, these activists will continue to put themselves on the line for the sake of the planet.

Elizabeth King
Elizabeth King is a politics, history, and culture writer based in the Twin Cities. She is generally pretty cranky but still enjoys traveling, music from the early 2000's, and plotting the resistance. Feel free to say hi on Twitter at @ekingc or check out some of her work at www.elizabethcking.com.
Activism
Current Events
Activism Environment Politics