Women Who Run: Is Nicole Malliotakis About to Make History As NYC’s First Female Mayor? 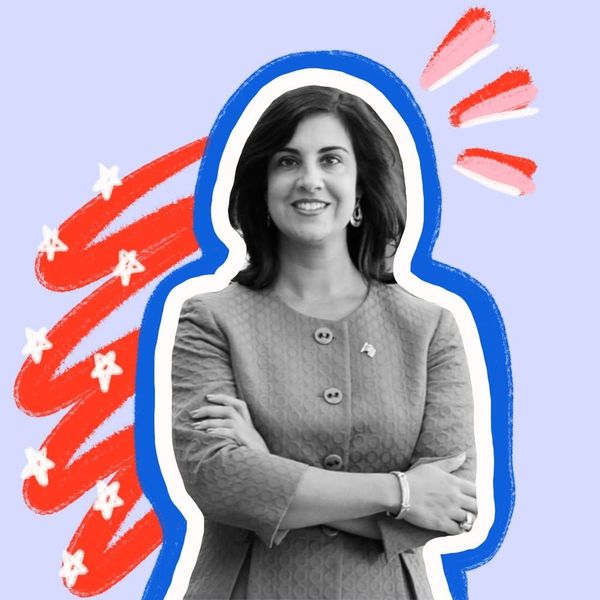 “Women Who Run” is a series highlighting six female candidates currently running for office. Whether the roles they’re campaigning for are in local, state, or national government, they’re all proof that more women are getting involved in politics than ever before.

Come November 7, Nicole Malliotakis just might be the first woman to be elected mayor of New York City. She would also be the city’s first Hispanic mayor, the first from Staten Island, and — at 36 years old — she would be its third-youngest.

Malliotakis doesn’t oversell her glass ceiling-shattering attributes. Instead, she is focused on continuing her fierce campaigning to get her name out to voters, letting them know exactly what she’ll do for them should she win — fixing the city’s struggling transit chief among them.

Malliotakis is running against incumbent Democratic Mayor Bill Di Blasio, and she’s not naive about the challenges a Republican candidate faces in a liberal hotbed like New York City. But she spent seven years serving in the minority party in the New York State Assembly and says she welcomes reaching across the aisle to focus on the issues and get things done — not unlike her political idol, Teddy Roosevelt.

“Roosevelt took on both Democrats and fellow Republicans and made a huge difference,” she tells Brit + Co via an email interview. “He was a true reformer and always did what was right.” She also can’t help but note that he too started his career as a member of the New York State Assembly.

Malliotakis was raised by a mother who fled the Castro regime and a father who emigrated from Greece. Together they ran a small Brooklyn business. That experience has understandably and uniquely informed her vision of what the “American dream” means and a what democracy should look like.

“It shows you how truly special New York City is when my mother emigrated from Cuba and my father from Greece and in just one generation their daughter may be elected mayor of the city,” she says. “That is the American dream we must preserve.”

1. Tell us more about the position you’re running for.

I’m running for Mayor of the City of New York, the greatest city in the world with a population of 8.5 million. The Mayor is responsible for a city workforce of roughly 325,000 employees, 50 agencies, and an estimated budget of $85 billion.

2. What inspired your run for office?

My mother is a Cuban refugee and my father is from Greece. They owned a small business in New York City and worked hard all their lives. They taught me the importance of democracy and electing our leaders. I love this city and want to do whatever I can to improve it.

I have been serving in the New York State Assembly for the past seven years, and as a member of the minority party, I spend most of my time fighting against bad pieces of legislation. I want to be able to proactively push my agenda to improve our city. There has been a clear deterioration in the quality of life — we are experiencing a transit crisis with 70,000 subway delays a month, our children are graduating the public school system needing to take remedial math, reading, and writing in college, and our mayor continues to spend the people’s hard earned tax dollars without results. I am running for mayor to address these issues and get results for citizens.

3. What has been the biggest struggle of your campaign so far?

There is no doubt that our late entrance into the race makes it an uphill battle. We have a shorter window to raise funds and public awareness and to get our message and policy proposals to the people. Unfortunately, the mayor has openly created an environment of “pay to play” which has put him at an advantage over us when raising money. We have out-raised the mayor in the last fundraising cycle so I believe that we will be able to raise enough funds to be competitive in November.

4. What are the main issues you’ll fight for if you win?

Restoring the quality of life for all New Yorkers is my main priority, which includes various issues.

New York City is facing a transit crisis. I have identified numerous revenue sources to pay the city’s share of $500M. It amazes me that Mayor de Blasio spends money like a Saudi prince but when it comes to the number one issue facing our city, he doesn’t want to share the cost. His priorities are backward.

We are also experiencing the worst homeless crisis since the Great Depression. My H.O.P.E and Treatment B4 Crisis initiatives will help the homeless and mentally ill.

The cost of living in this city continues to skyrocket. Despite this, basic city services continue to deteriorate under this mayor. We need to reverse those trends to ensure all New Yorkers can continue to live in this great city.

I also want to enable parents to get the best possible opportunities for their children. I will fight for more choice in education and schools and ensure that money spent is going to advance student’s education and not getting stuck the bureaucracy. It is ridiculous that New York spends more per pupil than any other state in the nation yet teachers are forced to pay for their own supplies and children are still being taught in trailers.

5. What have you learned by being a Republican in a very Democratic city?

As a Republican in an overwhelmingly Democratic city, I know I must reach across the aisle and work together to get things done. I welcome that. I have many colleagues on the Democratic side who have become friends and allies. We are all New Yorkers. We are all in this together. I have worked on a multitude of bipartisan efforts while in the State Assembly. After Hurricane Sandy devastated my district, I had to work with Governor Cuomo to help the thousands of people affected. Our current mayor can’t seem to work with the Republicans in Washington or the Democratic governor of his own party.

6. What would being the first female Mayor of NYC mean to you in terms of representation?

Being the first female mayor of New York would mean this truly is a city for everyone. I am also the daughter of immigrants, first generation. This is a story that many families in New York can deeply relate to. It would mean so much to show my parents the results of their sacrifice.

7. What experiences in your seven years in elected office to date do you think has best prepared you for being Mayor?

Learning the intricacies and ins and outs of Albany politics has made me a fighter. I am not going into this naive about the reality of New York politics. I will fight tooth and nail every day on behalf of New Yorkers, just as I do every day in the Assembly on behalf of my district. I can work with everyone and build the coalition needed to move this city forward.

8. And what in your upbringing in Staten Island has best prepared you for being Mayor?

I was born in Manhattan, grew up in Staten Island, and spent most of my summers in Sunset Park, Brooklyn where my parents had their small business. What I have learned is that each borough is unique and there is no cookie-cutter approach to governing. What works in Manhattan doesn’t necessarily work on Staten Island or Queens and what works in Brooklyn doesn’t necessarily work in the Bronx. Communities should be able to play a bigger role is what takes place in their neighborhoods.

9. How would you encourage women to get involved in politics or their communities if they want to make a difference but don’t know where to start?

We have come such a long way, but women need to continue to fight for equality by using their vote and their voice. A good start is to volunteer with a candidate who shares your ideals and vision for your community. Learn from that experience and if you want to contribute to our history, then get more involved and run for office. Whatever you do, please don’t remain on the sidelines. As Teddy Roosevelt said, “It is not the critic who counts […] The credit belongs to the man who is actually in the arena.”

10. How can voters support your run for office?

The election is on Tuesday, November 7, 2017. People can help by signing up to volunteer, spreading the word about my candidacy on social media, and making a donation. People from across America are donating to my campaign because they know that New York City can have an influence on the rest of the country. My campaign relies on small donations, not social interests. Donations are important to get our message out but voting gets us the win so in short, we need donations, volunteers, and votes. It is also worth noting that donations in the amount of $10 – $175 that come from NYC residents are matched $6 to $1 by the New York City Campaign Finance Board.

I would encourage everyone to visit my website nicolemalliotakis.com and to follow me on Twitter @NMalliotakis to learn more about me, the issues and to get involved.

Nicole Villeneuve
Nicole is an entertainment and lifestyle writer covering pop culture, news, and cool women doing cool things. She likes yard sales, MTV's Teen Mom, and putting too many memes in the group chat. She lives in Toronto.
Women Who Run
Politics
Women Who Run