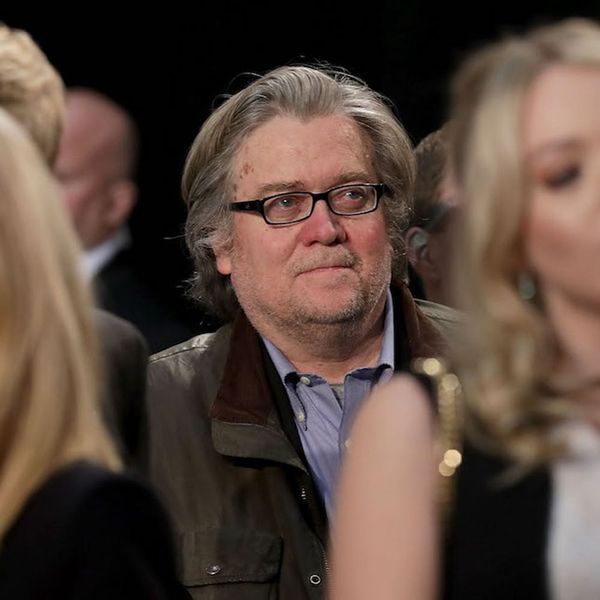 It’s been over a week now since Donald Trump was elected President. While memes about Obama and Biden pranking Trump provided a momentary and welcome distraction, a reported increase in scary attacks on minorities has already been documented and Trump has reiterated his immigration and reproductive health plans that dial the country’s progress back an embarrassing amount.

On Sunday, Trump also named his first two hires, including RNC Chair Reince Priebus as White House chief of staff and election campaign manager Stephen Bannon as Chief Strategist and Senior Counselor to the President. The picks were immediately met with controversy, and Bannon in particular emerged as a dangerous choice for such a position of power. Here are some of the most pressing concerns that have people freaking out, and what you can do to have your voice on the matter heard.

1. Bannon is most well-known for being the chair of Breitbart, a right-wing news publication that is a haven for the alt-right, an extreme brand of far-right conservatism that promotes racism, homophobia, misogyny and more. A lot of people may have first heard about the outlet in the summer, when Trump’s campaign manager at the time, Corey Lewandowski, grabbed one of Breitbart’s then-reporters, Michelle Fields, by the arm at a Trump rally in the spring. Trump hired Bannon to run his election campaign back in August.

2. Bannon has been accused of being anti-Semitic. Bannon’s ex-wife Mary Louise Piccard has accused Bannon of saying that he didn’t want their daughters attending a Los Angeles school because of the number of Jewish students who were also enrolled there. Bannon has denied these claims.

3. He was formerly charged with domestic violence. Back in 1996, Piccard claimed that Bannon grabbed her by the throat and arm during a fight. The police noted red marks on Piccard at the time. Bannon was charged with misdemeanor domestic violence, battery and dissuading a witness charges, but Piccard failed to appear in court and the charges were dropped.

4. His appointment gives white supremacist groups some of the most powerful representation possible. Former Ku Klux Klan leader David Duke has applauded Bannon’s hiring, telling CNN it was “excellent” and that he is “creating the ideological aspects of where we’re going,” and the Chairman of the American Nazi Party, Rocky J. Suhayda, has said that it “showed him Trump could follow through on his campaign promises.” Straight-up chilling and horrifying.

Glenn Beck: Steve Bannon is "a nightmare" with clear ties to white nationalists. "He is a terrifying man." https://t.co/OjuZFpe8ag pic.twitter.com/FoodDyDmq7

People aren’t taking Bannon’s appointment sitting down, though. Members of Congress, as well as many organizations, are starting to speak out against it, including the Anti-Defamation League, who had this to say: “It is a sad day when a man who presided over the premier website of the ‘alt-right’ — a loose-knit group of white nationalists and unabashed anti-Semites and racists — is slated to be a senior staff member in the ‘people’s house.'” Indeed.

Sample scripts as well as easily accessible contact information for your local representatives and the media to speak out against his appointment have been popping up on Twitter, making it easy for you to have your voice heard if you wish to protest his appointment.

I just wrote my former senator to say no to Steve Bannon's appointment. I'm lazy as hell. If I can do it you can too https://t.co/FzQREVsSnl

I get a little nervous when talking on the phone to these offices. Here's a script for calling your representatives about Steve bannon: pic.twitter.com/FZnJXdIw5J

Did we mention it’s only been a week?

How do you feel about Trump’s first hires? Let us know over @BritandCo.