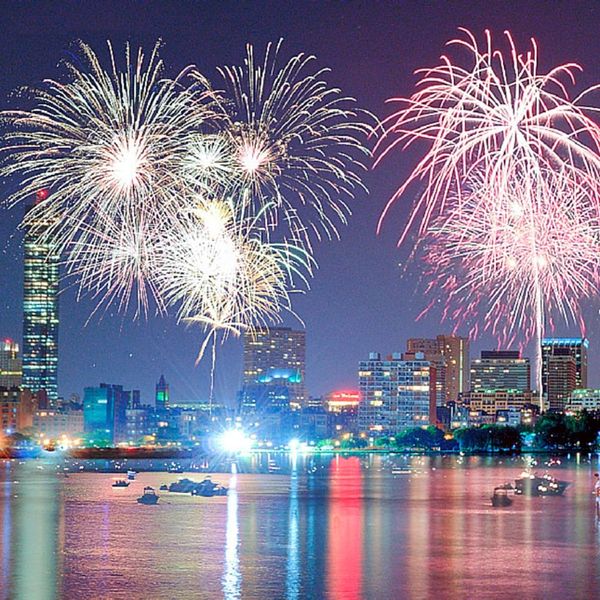 With the Fourth of July, we’re gearing up for the biggest birthday celebration of the year. We’re planning our most patriotic outfits and heading to the nearest beach or barbecue to celebrate this exciting day. If you’re wondering where to watch the fireworks this year — or where they’re so good you’ll suffer from FOMO if you’re not there — here are 10 patriotic displays you won’t want to miss!

1. The 39th Annual Macy’s 4th of July Fireworks: Ready for the biggest, most spectacular fireworks display in the country? You won’t want to miss Macy’s annual fireworks show in New York City. Gloria Estefan will also perform her debut of “America,” which is bound to give you chills. (via Macy’s)

3. Wawa Welcome America!: There’s no better place to celebrate the Fourth of July than at the birthplace of the United States: Philadelphia. The Wawa Welcome America! celebration includes one of the biggest fireworks displays in the country as well as the country’s largest free outdoor concert. If you’re a music lover, this is the perfect event for you. (via Visit Philadelphia)

5. Fourth of July in NOLA: Looking for the biggest party in the country to celebrate our nation’s birthday? Then you’ll definitely want to head down to New Orleans. From Sparks in the Park to the Uncle Sam Jam, there’s a variety of events that’ll get you excited for the fourth! (via NOLA)

6. Grand Haven’s 4th of July Fireworks: Spending your 4th of July in the Great Lakes region? You don’t want to miss this spectacular Lake Michigan fireworks display in Grand Haven, MI. Not only do you get to experience an amazing fireworks show, but there’s also a must-see Musical Fountain performance that’s bound to leave you breathless! (via Visit Grand Haven)

8. Freedom Blast: Here’s another Midwest favorite that’s jam-packed with Fourth of July festivities. Hosted in downtown Indianapolis, Freedom Blast is the largest fireworks display in Indiana. Before you spend the evening watching fireworks, be sure to head out to the Indianapolis Motor Speedway or sign up for the Firecracker Six Mile Run. (via Firecracker 6)

Where are you celebrating the Fourth of July this year? Tell us in the comments below!

(Featured image via The Boston Calendar)

Olivia Adams
Olivia is a PR professional and blogger based in Grand Rapids, MI. You can typically find her spending hours writing in quirky coffee shops, sipping a craft beer on Friday nights or running half marathons. She also loves to dance her heart out, dream of possibilities, inspire people through social media and find beauty in everyday life. Read more of Olivia’s work at Olivia Adams Public Relations.
4th of July
Party
4th of July