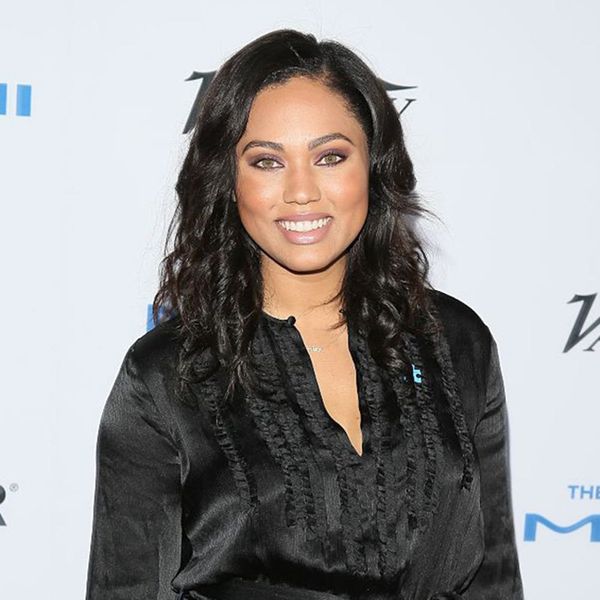 Ayesha Curry seems to be everywhere these days — including in Sonoma, CA for a photoshoot, where we hung out with her last week. With all the buzz from her husband Stephen Curry’s team being in the NBA playoffs to the buzz she’s created herself with her strong, public support of him after he was ejected from Game 6, Ayesha has a lot going on right now. Here’s what we learned from spending all day on a shoot with Mrs. Curry and daughters Riley (three) and Ryan (one next month!).

1. Ayesha is a walking, talking Pinterest board (in a super good way). The creative momma was buzzing with cooking hacks, beauty tips and recipe secrets all day; her mind is like IRL Pinterest. It’s kind of amazing. One tidbit she shared was figuring out a last-minute meal to make when she hosted her brother’s new (vegan!) girlfriend for dinner. Her description of the eggplant succotash she whipped up with ingredients she had around the house had us all straight up salivating.

There are def celebs out there who portray a Pinterest-perfect image of themselves in public, even though they really aren’t that creatively minded IRL. Ayesha is not that person. The food blogger/wonder woman mom/amazing wife/lifestyle lady is not just a persona she’s playing up — it’s who she really is.

The Brit :60 with Ayesha Curry

2. Ayesha is responsible for Steph’s (and the Curry family’s) healthy habits. Ayesha is pretty proud of refining Steph’s junk food ways. “When we first started dating back in college, he was a pizza and chicken tenders kind of guy,” she told me. “Now he’s broadened his palate. I feel like I have something to do with that.” We bet.

We could see that health was a clear priority of Ayesha’s on the shoot and in her and her family’s lives beyond. The project she’s working on with Sonoma Brands, an innovative food incubator local to the Bay Area, is health-focused, so the food on set was suuuper healthy. It was definitely not typical of what’s usually served at all-day photoshoots — there were no potato chips, cheeseburgers or soda at this craft service, y’all. Think coconut chips, prosciutto-wrapped honeydew, fruit salad, fresh veggies, coconut water and juice.

3. The Ayesha Curry you see on TV actually looks glam by accident. Ayesha is not a lady who has a ton of time (or interest, TBH) to primp and prep — she’s more of a 10-minute makeup routine kind of gal. When you do see her looking extra gorg, it’s probably a total coincidence. “I luck out on days when I have my makeup done,” she told me. “I’ll go to a game and be like, ‘Oh yeah, I got my makeup done, I look like this all the time!’” I loved that she was real about not “waking up like this.”

4. The Currys are kind of the perfect fam. Okay, no one is perfect — but they are the most creative famous fam we’ve hung out with in a long time/ever. It’s unlikely you’d find the Curry clan binging TV shows and being couch potatoes. Ayesha told me that she and her family love playing the app Heads Up!, a techy twist on charades, but we barely saw Riley with her mom’s phone in hand. Get real, that’s rare for a three-year-old these days.

During the shoot, Riley was coloring nonstop, super intent on trying to stay inside the lines to create a fridge-worthy masterpiece. When she wasn’t busy coloring, Riley was flexing her musical muscles by tickling the ivories on a piano that happened to be at the shoot while singing the ABCs. It was hard not to melt, trust me.

Happy Father's Day to my darling husband. You are the most humble, happy and caring person I know. The thing I love most is that regardless of what happens in your professional life you come home the same happy go lucky husband and father ready to just be there. I love that you can get on the floor and play with the girls, take over bed time duties and simply be present with our girls. Not to mention the random princess tea parties that can happen at any moment and you always oblige. We love you so much dada!!!

5. Family means EVERYTHING to Ayesha. At the shoot, Ayesha’s (stunning) mom was on set all day, doting on Riley and Ryan when they weren’t on camera — it was really touching to see how natural it was for the whole family to be involved in Ayesha’s project. The girls were playing together, learning (I overheard Ayesha giving Riley a mini math lesson) and genuinely having fun during the day.

Steph also made sure to show his support for his wife and girls even though he wasn’t physically there — it was, you know, kind of a busy/important week for him with the playoffs and all. He FaceTimed Ayesha before lunchtime, and when she saw him calling, she got giddy. It was seriously adorable to witness.

Throughout our interview, it was sweet to hear her bring it back to Steph in so many different parts of our conversation. Whether we were discussing date night in the Curry household (which, after Game 5, was super low-key and involved their favorite *other* game, old school Mario Kart), Ayesha’s favorite meals to whip up or how she preps for a game night, it was apparent that Steph (and her entire family) is everything to her and always top of mind. Seeing her Tweets from Thursday night in defense of her husband mirror her always supportive attitude when it comes to the Curry clan. Her passion for her family, shown by steadfastly having Steph’s back after he was ejected from the game on June 16, comes from her being a praiseworthy mom and partner. After seeing this genuine side of her, I can honestly say I’d expect nothing less than to see her say and do anything to support her husband. (Can we talk about that Father’s Day message on Instagram? <3)

6. Riley is destined for stardom. It’s good that Riley has a strong family foundation, because we would not be surprised if we see her own name in lights some day. You guys have seen her at press conferences, so just imagine her at a photoshoot. The girl is a total natural in front of any camera — from my iPhone camera where I snapped her playing the piano to a pro camera that had her posing on command. Somehow, at three years old, she can smize (smile with your eyes, duh), strut her stuff and totally captivate on camera.

Even though Riley looks ready for her own show on the Disney channel any day now, throughout the shoot, she was also the best big sister to little Ryan. All day, I never witnessed a meltdown during the shoot (a day that can make your average adult crew member a bit cranky). She went with the flow without any of the — let’s be real — brattiness that can be associated with kids that age. Whether she was literally jumping up and down next to the photographer to get Ryan to giggle on camera or playing with her while Ayesha was busy, their bond is precious and TOTALLY adorable.

Whether she’s supporting Steph at a game, playing chauffeur to her daughters or whipping up pan steaks in the kitchen, Ayesha is an admirably well-rounded boss who balances being a wife, mom and entrepreneur well, but clearly never forgets what is most important to her: family.

Do you follow the Curry fam off the court? Are you tuning in to Game 7? Tweet us your thoughts @BritandCo!

Beth Wischnia
You can typically find this Texan writing, trying on a new lipstick, gabbing with her identical twin sister or volunteering at the local animal shelter. She finds inspiration from rosé, beauty products, Tex-Mex and cats.
Celebrity News