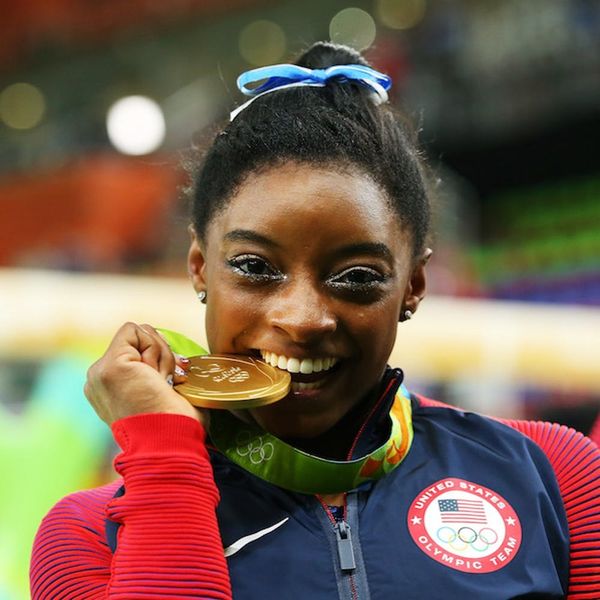 Despite the controversy in the lead up to and duration of this summer’s Olympics in Rio, the games were also majorly inspiring — and, yes, kinda hilarious.

But they didn’t just give us memes — the Olympics also brought us Simone Biles. As a part of the US Women’s Gymnastics team this summer, the 19-year-old, first-time Olympian took the games by storm, racking up an impressive FOUR gold medals (five medals in total) and winning America’s collective heart — yep, even celebs loved her — while doing so.

Here are some of the highlights from all the joy true American hero Simone Biles brought us in 2016.

1. Simojis: A slew of Olympic athletes released their own emoji apps this summer, including Simone, who curated this collection of emoji herself. Because duh.

2. That EYELINER: Everyone was all, “OMG YES, another medal for Simone!” Then they were like “HOLD UP, IS THAT RED WHITE AND BLUE SPARKLY EYELINER?!?!” And that’s when we knew we were dealing with a legit hero here.

3. When She Met Her Hollywood Crush, Zac Efron: Simone is such a big Efron fan that she’s even admitted to having a life-size cutout of him in her room. In August, it happened — the pair met, and it was ADORABLE. Naturally, the affection was mutual: Zac, like us, had been losing his mind over how good she was in Rio before they’d ever met.

selfie with Kim ✔️😍 just as beautiful in person

4. When the Final Five Had More Fun at the VMA’s Than, Like, Anyone Else: Not only did Simone and the crew get to present Beyoncé with her Best Female Video award, but she ALSO got to schmooze — and take selfies — with her fave celebs, such as Kim Kardashian.

5. When Channing Tatum Fan-Girled Over Her and She Was Chill AF. I mean, of course he freaked out. She’s the COOLEST.

That's a wrap! We’d like to think we stuck this takeover. And President Obama gave his best shot to a split with us today, too. Thanks so much to the President, First Lady @MichelleObama, and @VP for having us. #FinalFive out!

PRETTY LITTLE LIARS! thank you guys for letting me see the set today!

7. When She Went on Set for Pretty Little Liars: In case you haven’t realized it yet, Simone is all of our long-lost BFF. Her fandom of PLL pretty much seals it, but unlike you and me, she actually got to visit the set, watch them film and hang out with the cast. It’s yet to be revealed if she indeed filmed her own cameo, but we’re gonna go ahead and say yes because, hello, dream come true.

This week's cover: Katie Ledecky, Michael Phelps and Simone Biles are the stars of the Olympics. Photograph by Simon Bruty @anychance_

8. When She Announced a MUCH-Deserved Break from Gymnastics: Obviously we’re not stoked to have LESS of Simone in our lives, but when she told Sports Illustrated that she’d likely be taking about a year off from competing, we were happy to know that she was taking some time to take care of herself and enjoy life, which she so clearly is.

What’s your favorite Simone Biles moment from the year? Let us know over @BritandCo!