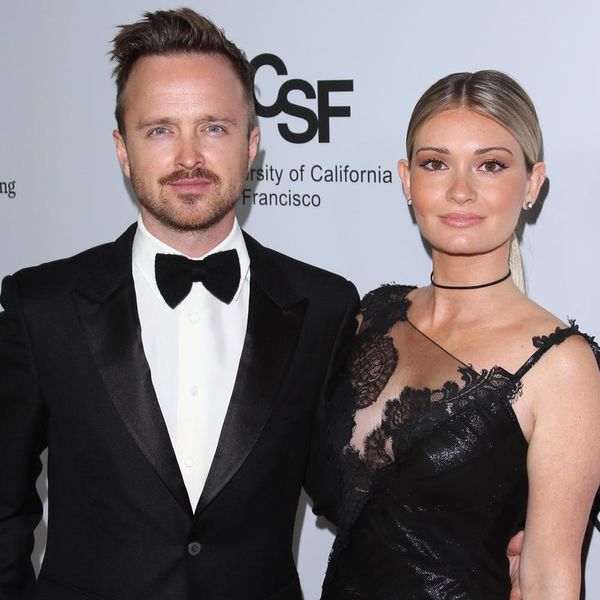 Unlike his Breaking Bad character, Jesse Pinkman, Aaron Paul is living a real-life fairytale with his wife, Lauren Paul, and their newborn baby girl, who has the most perfectly whimsical name.

According to The Blast, that’s the name that appears on the little one’s birth certificate. And while it’s absolutely adorable, it’s also interesting to note that Story was given the last name that her parents have adopted, as opposed to the ones they were legally born with (that is, Aaron Sturtevant and Lauren Parsekian). Paul is Aaron’s middle name, which he took on as a stage name. Now, it appears to be their family name.

By the looks of the latest pic the new dad posted with his tiny bundle of joy, he’s already getting the hang of this parenting thing. In a selfie of his reflection in an ornate mirror, the actor can be seen holding his daughter, who’s wrapped up in a blanket and contently snuggled into her dad’s arms.

Back in January, the actor told Jimmy Kimmel that he was “over the moon excited” to have a little one, saying, “I love babies. I always have loved babies.”

I have never loved you more than I do right now. We are so lucky to be your girls forever. ✨

Lauren, cofounder of the Kind Campaign, also posted a pic of their newborn baby girl with Aaron, adding the heartwarming caption, “I have never loved you more than I do right now. We are so lucky to be your girls forever.”

In the photo, Aaron holds little Story in what appears to be the lucky lady’s nursery, which is decked out with golden moons strung across the ceiling and a precious pink tent set up in the corner, complete with comfy pillows and a ukulele for lullabies.

Congratulations again to the adorable family!

What do you think about the name Story for a baby girl? Let us know @BritandCo!