This ABC Reporter Had the Most Magical Paris Proposal Ever 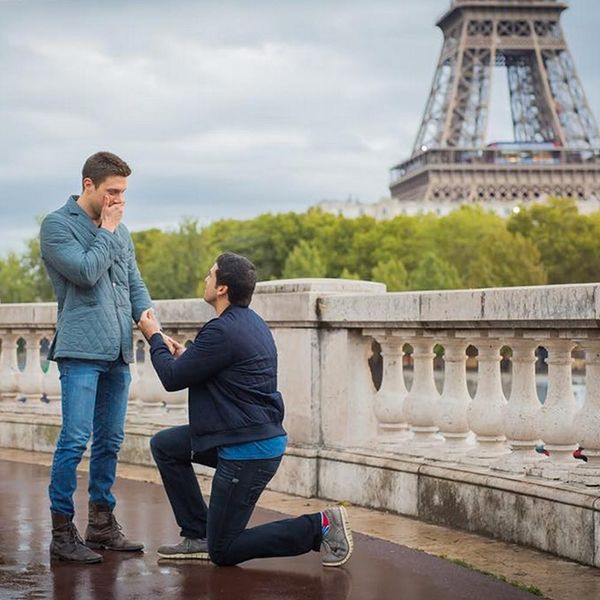 There’s a reason Paris has a reputation for being one of the most romantic cities in the world. When you’re spending your days walking around cobblestone streets, sipping wine at sidewalk cafes and taking in those Eiffel Tower views, who doesn’t think about making (or maybe receiving) some kind of grand, romantic gesture? If you don’t have any immediate plans to head to the city of lights with your beau anytime soon, do as we’re doing and live vicariously through ABC reporter Gio Benitez and his boyfriend Tommy Didario, who just had the most epic engagement while on vacation in Paris.

The couple both took to Instagram yesterday to share their special moment (which obviously took place with the Eiffel Tower in full view). Gio posted a photo of the moment he got down on one knee to propose to Tommy alongside the poetic sentiment, “Time is what’s left behind in the wake of love.”

Tommy also shared two sweet snaps of their life-changing moment. Next to a photo of their rings, Tommy wrote, “Today I said yes to my true partner in life, couldn’t be happier to stand next to you forever.” He then shared another sweet photo of him and his new fiancé alongside the caption, “Celebrating a magical day in the city of love! Much thanks for all the kind words and well wishes!”

What’s the most romantic proposal you’ve seen lately? Share with us in the comments below.

Cortney Clift
Cortney is the senior writer and special projects editor at Brit + Co. She typically covers topics related to women's issues, politics, and lifestyle. When she's not buried behind her computer you'll find her exploring New York City or planning her next big adventure.
Engagement
Home News
Engagement