Summer Lame So Far? Pack Up for One of These 11 Adult Summer Camps 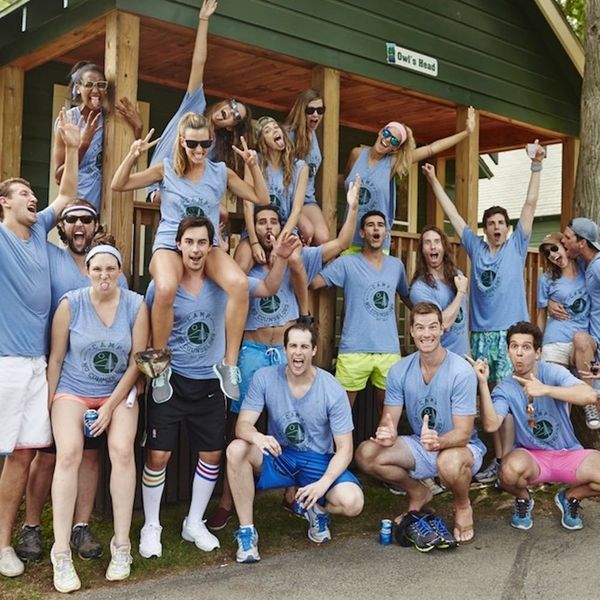 Summertime means s’mores, suntan lotion and swimsuits. For a lot of us, it also means fond memories of sing-alongs, lake swimming and other activities associated with the great American pasttime that is summer camp. But have no fear, camp lovers! There are a slew of camps for adults. From surf/sail adventures to good old-fashioned archery and team sports, these summer camps will make you feel like a kid again.

1. Camp No Counselors: It’s all the fun of your traditional summer camp (craft classes, slip-n-slides, dodgeball and more), but with the advantages of adulthood (ahem, open bar and theme parties!). With locations in Chicago, Los Angeles, Nashville and New York, this camp is easily accessible for most. And yes, cozies are included.

2. Skipper Academy: Are you a hardcore New England sailor, or someone who wants to be? If so, then Skipper Academy is for you. You’ll learn how to become a yachting or sailing professional. Just think of becoming a skipper or a steward and sailing around the world, from the Virgin Islands to Croatia to Turkey. Sign. Us. Up.

3. Cannacamp: It’s all in a name, and if you thought “CannaCamp” sounds like it would be a 4/20-friendly, adult-only resort, you thought right. Tucked into the mountains in Colorado (naturally), it’s a 170-acre resort packed with adventurous activities like hiking, mountain biking, rock climbing, cannabis yoga and ziplining along with creative + educational classes like painting and cooking with cannabis.

4. Soul Camp: Started by two camp friends who attended Camp Towanda, Soul Camp aims to bring together the spirituality and connections you felt strongly back in the good old days. There’s fitness, yoga and nutrition-centric stuff, and their objective is to “bring you back to who you really are.” Locations are at the original Camp Towanda in New York and Wonder Valley in California.

5. Rock ‘n’ Roll Fantasy Camp: Want to rock out with the likes of Brian Wilson of the Beach Boys and Sammy Hagar? This camp will have you moving from air guitar to actual guitar during a five-day camp in Las Vegas. You can write, rehearse and perform your own song with your dream band. Your little ones can get in on the action as well with their Young Rockers group.

6. Endless Summer Surf Camp: We’ll make up any excuse to be near the sea and sand, but surf summer camp sounds totally RAD. Take a page from Endless Summer, the vintage movie from 1966 about surf culture in SoCal, and hit the waves with these expert instructors. There’s also a “Surf and Turf” option if you’d like to brush up on your golf skills while you’re there.

7. C.I.A. Boot Camp: Sorry, not that kind of CIA (we wish!). CIA stands for the Culinary Institute of America, one of the top culinary schools with branches in St. Helena, California; Hyde Park, New York; and San Antonio, Texas. Learn everything from basic knife skills to mastering the grill. Be sure to book a few actual boot camps on your off days to make up for all the delicious food you’ll be eating!

8. Wanderlust Festivals: Focused on mindful living, Wanderlust Festivals want to take you back to nature with meditation, yoga and a holistic approach to being. Locations include Whistler, British Columbia and Mont-Tremlant, Quebec, and for those locations alone we want to sign up to see the best Canada has to offer. Bonus: If you’re going to be in Australia for any reason in October, they’ll have a camp set up there as well.

9. Camp Camp: Take a regular old summer camp in idyllic Maine and add in the LGBT community and you have Camp Camp. Activities range from stained glass classes to canoeing to sailing, where everyone can be themselves, whether they’re in their 20s or their 70s.

10. Camp Grounded: Imagine unplugging for an entire weekend. Now, think about adding in classes such as non-violent communication, origami, pinhole photography and ukelele 101. You can get quite the education while digitally detoxing at Camp Grounded. Now doesn’t that sounds like a real vacation?

11. Shelter: Want to make your own camp fun, complete with your own posse of friends? Shelter helps make that possible. Pick a location, pick your tent and pick your extras (entertainment, activities, etc.) for a DIY camp extravaganza. There are locations across the East and West Coasts and Texas.

What’s your favorite camp memory? Tell us in the comments!