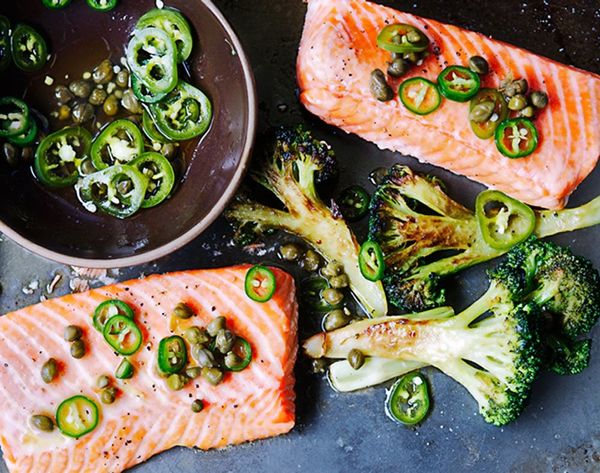 When trying to cook healthfully at home, staying on budget is half of the battle. Seafood often has the stigma of being too fancy-pants to save money on, but think again before conceding to chicken cutlets for the second time this week. Tons of fish and shellfish is reasonably priced to make even Wednesdays feel luxurious. Let’s assume you have olive oil and the basic spices in your kitchen. Here are 12 meals that don’t need to be saved for a special occasion.

1. Curried Mussels: Open up to mussels, which come as affordably as $6 for a two-pound bag. A simple broth made with unsweetened coconut milk gives these little guys a bath for less than $5 per serving. (via Bon Appétit)

2. One-Skillet Orecchiette With Shrimp, Spinach and Mushrooms: Treat yourself to a hearty pasta, packing vegetables and protein into one satisfying bowl with a white wine sauce. This all comes in at just more than $7 per serving, including the bottle of white cooking wine, which could easily be subbed out for what’s left in your fridge. (via Serious Eats)

3. Roast Salmon and Broccoli With Chile-Caper Vinaigrette: Topped with salt and a kick, straightforward salmon becomes anything but boring. Cuts do vary in price, but using a decent one will still only set you back around $8 per person. (via Bon Appétit)

4. Tequila Lime Fish Tacos: Okay, who said tequila? At just $8 per pound, tilapia joins the fiesta, along with all of the fixins’. (via Love and Lemons)

5. Cod With Miso Butter Baked in Parchment: Unwrap a delicious present after this soft, white fish steams in a touch of miso butter, vegetables and its own juice. Even with cod running around $14 per pound, the simplicity of this dish brings each serving to around $7. (via Broad Appetite)

6. Salmon Croquettes: Packaged salmon works for these patties, teeming with flavor, making them easy on your stomach and your wallet for around $4 per serving. (via Cooking Light)

7. Almond Butter Soba Noodles With Garlic Shrimp: Creamy and sweet almond butter sauce gives shrimp and soba a comforting twist, while crisp veggies add some bite. While this dish requires buying several sauces, it will average around $13 per serving once you do, spreading the cost over many nights of noodles! (via Spoon Fork Bacon)

8. Mexican Cod and Potato Stew: No stovetop needed for this one-bowl meal, which surprisingly is made entirely in the microwave. It costs less than $6 per serving, plus bonus points for easy cleanup! (via Martha Stewart)

9. Jerk-Rubbed Catfish With Spicy Cilantro Slaw: For just $6 per serving, explore the lighter side of a fish. (via Cooking Light)

10. The Best Tuna Meatballs: A pricier cut of fresh yellowfin tuna ($25 per pound) goes a long way in meatball form, making glorious leftovers for lunch the next day. Each serving costs approximately $12 this way, or you could try modifying the recipe and use packaged tuna a bigger savings. (via Jamie Oliver)

11. Flounder Milanese With Arugula and Tomato: Enjoy this lightly sauteed flounder alongside a salad dressed with lemon for around $6 per serving. Immediately enter Mediterranean vacation mode in your mind. (via Skinny Taste)

12. Lobster and Cream Cheese Wontons: Fake it ‘til you make it with these delectable bite-sized treats made with lobster mix from your local grocer. Serve a whole party for $8, or feed yourself for a single buck. (via Budget Bytes)

Which of these cheap eats will you be diving into? Have a mari-good-time in the comments below.

From Your Site Articles
Joelle Berger
Joelle is a recovering attorney living in New York City. With insatiable hunger, she blogs about cooking, restaurants and travel. She also writes creative nonfiction, telling the tales of only children and Manhattan in your twenties. Follow her adventures on Average Joelle.
Dinner Recipes
Recipes
Dinner Recipes
The Conversation
Reviews:
More From Recipes