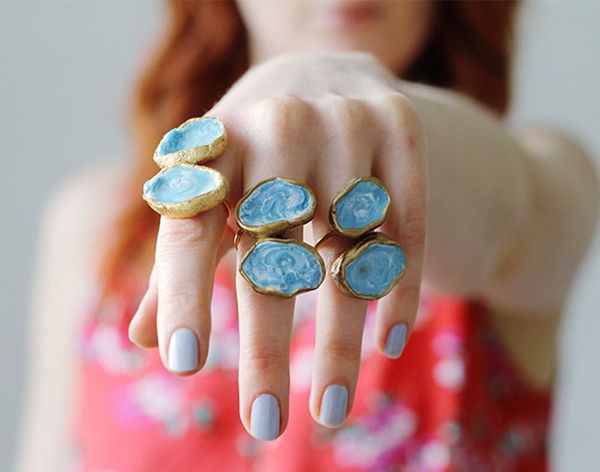 Our obsession with stones, gems and geodes just won’t quit, but we’re definitely not mad about it. In fact, we embrace our love of wearing and decorating with stones and natural elements of all shapes, sizes and colors. This rockin’ (see what we did there?) roundup is dedicated to the lovely agate. We’re stringing agate slices from long gold chains, creating agate wall mosaics and even making agate lamps, people. Get to scrolling!

2. Gold-Leaf Agate Slice Coasters: These striking gold-leaf agate coasters will have your guests totally impressed with your DIY skills. Little do they know these gilded beauties take only minutes to whip up. (via Bliss at Home)

3. Agate Bauble Box: Is your bauble box too plain Jane for your colorful lifestyle? With some acrylic paint, stone glue and a stunning agate slice, you can take your box from boring to bold in a flash. (via Glitter Guide)

4. Agate Slice Wall Art: If you have tons of gorgeous agate slices just lying around with no purpose, why not turn them into wall art? These slices also make fantastic window hangings. (via Etsy)

5. Gold-Brushed Agate Napkin Rings ($19): This set from Darby Smart has everything you’ll need to create gorgeous agate napkin rings that you’ll want to keep forever. Bust them out at your next dinner party for some serious table eye candy.

6. Faux Agate Earrings: We imagine agate studs would be pretty heavy, so to get the effect without the weight, this DIY tutorial teaches you how to create faux agate out of polymer clay. We are loving the depth of those turquoise swirls! (via Pitter and Glink)

7. Enamelled Agate Rings: Here’s another faux agate DIY project to add to your arsenal, but this one uses epoxy putty instead of polymer clay. The rings this tutorial yields are to.die.for. (via Fall for DIY)

9. Agate Stone Magnets: Who says your fridge has to be covered in a hodgepodge of rando magnets? DIY these gold-leaf magnets instead to achieve that more unified and sophisticated fridge decor you’ve been dreaming of. (via A Bubbly Life)

11. DIY Agate Slice Jewelry Set: This faux agate DIY project will take some time to complete, but the result is sooo adorable that we don’t even care if we have to dedicate an entire afternoon to it. (via Whimsy Box)

12. Framed Agate Art: Have some agate slices that are just out-of-this-world stunning? Frame them and hang them around the house. (via Dans le Lakehouse)

13. DIY Agate Lamps: Whoa. That is one sparkly lamp. (via Alison Giese Interiors)

14. Agate Cabinet Pull: We’re thinking about adding these cabinet pulls to our bathroom vanity. Agate all day every day, y’all! (via Merry Thought)

15. DIY Leather Agate Necklace: Pair a smaller agate sliced druzy with some leather and the right color beads to create this boho chic necklace that will have people asking where you bought it! (via Hello Hydrangea)

Have an agate DIY project you’d like to see on the list? Tell us about it in the comments!

Samantha Andreacchi
A Bay Area native, Sam currently lives in Philadelphia and is loving the city of brotherly love. If she isn’t working, trying a new restaurant or window shopping on Walnut Street, she’s probably at home binging on Pinterest, making a mess in the kitchen (aka cooking) or trying to read three books at once.
DIY Jewelry
Home News
DIY Jewelry
More From Home News