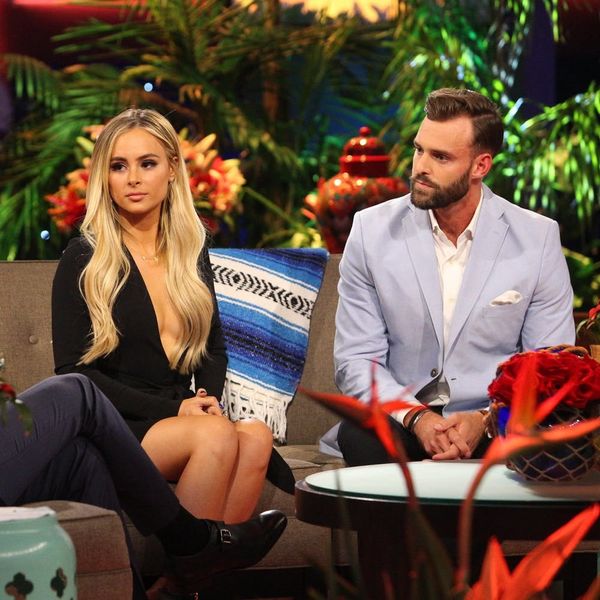 The romance certainly didn’t last long for Bachelor in Paradise’s Amanda Stanton and Robby Hayes! Soon after news broke that the two had split, rumors began to buzz around the suitor’s alleged infidelity. Both exes have since spoken out about the cheating rumors, but things have now taken a rather nasty turn.

During BiP’s season four finale, which aired last night, Stanton re-addressed the situation which led her relationship with Hayes to fizzle, saying, “We actually hung out the weekend after Paradise. He asked me to be his girlfriend. He was super sweet to me the first weekend after, so I was just like, ‘All right. Let’s give this a go.’” However, she says things never really progressed after that. “The weird thing is we didn’t really talk a whole lot. I felt like he hung out with me when it was convenient for him. For me, that’s not really okay.” Still, she expressed to E! that while she didn’t necessarily think the reality alum did anything wrong, per se, she didn’t think he was ready for a relationship.

Patience is a virtue. #bachelorinparadise

Sounds amicable enough, right? Apparently, her ex wasn’t feeling nearly as friendly. Despite giving a semi-cordial answer on the show, during which he said,“[T]here’s more to a relationship than just hanging out. I think that in relationships there’s certain wants, needs, and expectations that you need from your counterpart, and I think it’s safe to say on both sides, neither of us were consistent with that, and there were times of struggle,” Hayes took to social media shortly after to say that his former girlfriend felt like no more than a stranger to him.

Continuing to deny allegations made by twin Emily Ferguson about his infidelity, he wrote, “While I won’t be one to resort to vicious social media attacks, at the finale, I felt like I was sitting next to a stranger. I’ll never understand why there’s such a desperate need to represent an ‘innocent persona’ and resort to allowing allegations that are blatantly untrue be said about me … That’s not the behavior or accountability I expect from someone that ‘CLAIMS’ they care about me and was open to developing an ‘ACTUAL’ relationship.”

He went on to add that he’s “upheld [Stanton’s name] both publicly and privately with respect, regardless of the several ongoing THREATS I received.” Whoa!

While he says he admits to being friendly with other women (“Yes, I’m friendly and personable with many people, but I have respect for myself and even the person I’m casually dating”), he swore he kept his interactions “appropriate” before accusing his former paramour of using the media to handle her relationship issues and manipulate viewers into seeing her as a victim.

“History is repeatedly showing that some people thrive off of using the media and their ‘army’ to manipulate viewers to place one-sided blame, constantly play the ‘victim’ and use their friends to try and assassinate one’s character. Your story-line is getting OLD; at some point it’s just on YOU to stop living a double-life, and at this point, everyone sees through it,” he wrote. Ouch!

From the sounds of it, these two won’t be reconciling any time soon.

What do you think about what Amanda Stanton and Robby Hayes have to say about each other? Let us know @BritandCo!

Desiree O
Desirée O is a ‘Professional Bohemian’ who loves anything and everything related to the arts, entertainment, and pop culture. She ADORES being a ‘Newsy’ for Brit + Co, covering all of the latest tidbits of awesomeness that you want to read about. When she’s not writing, she’s either making messy art, going on long adventurous walks with her camera, or poking around over at bohemianizm (http://www.bohemianizm.com/). You can find out about Desirée O and her work at http://DesireeO.com/ or follow her on Twitter @DesireeO.
Celebrities
Celebrity News
Celebrities Celebrity Breakups TV