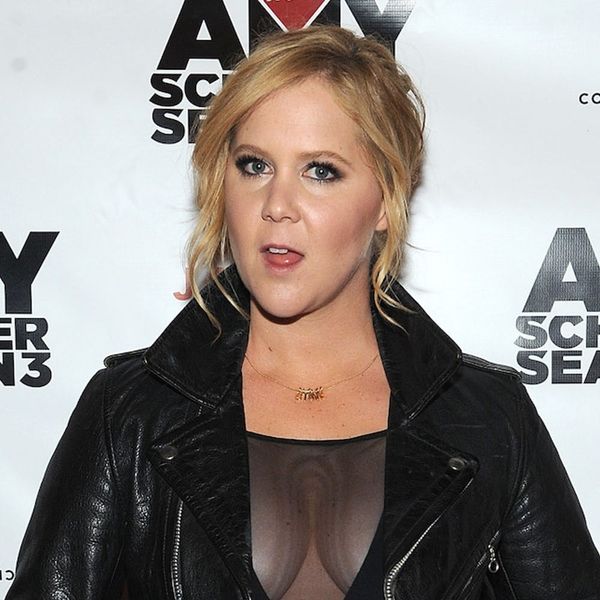 1. STOP EVERYTHING: Amy Schumer’s book has a release date. We’ve been waiting for more info since Amy’s huge book deal was announced in the fall, and now we know: The sassily and brilliantly titled The Girl With the Lower Back Tattoo will be out on August 16. We are 100% here for this. The book, said to cover Amy’s “childhood, how she got her big break in comedy, her family and feminism,” is available for pre-order in a bunch of ways via Amy’s website. If the promo image of the studded jacket and “First woman to write a book” tagline is any indication, we already love it. (via Amy Schumer)

Jack got to meet eagle the penguin! Thank you so much @woodlandparkzoo! @prattprattpratt pic.twitter.com/Dsrr4KPoy8

2. Can penguins be the new pet trend please? Maybe not — that seems pretty impractical — but this photo Anna Faris shared of her and husband Chris Pratt’s son Jack (who is ABSOLUTELY ADORABLE, can we just say) is really making us think it could work. For cute reasons. That’s enough right? Both Anna and Chris grew up in Washington state, and back in October, Seattle’s Woodland Park Zoo asked them to name their newest penguin. As a penguin with aspirations to fly, they went with Eagle. Jack seems absolutely ecstatic, though in a follow up picture, he looked a little less so. “Turns out sometimes penguins smell,” wrote Anna. Smelliness aside, we’re still dying of cuteness overload.

3. This lab and this teeny bunny are true friendship goals. Speaking of adorable animals, we couldn’t resist this video that’s been making its way around Facebook (Thanks, aunts and moms everywhere! Never change.). Some thoughts that will race through your mind while watching this video include: HOW IS THAT BUNNY REAL? THAT DOG IS SO NICE! CAN WE KEEP THEM BOTH? Etc. Photographer David Jackson recently re-posted the video that originally got 1 million views in its first 24 hours (it’s now at over 4 million), but this time we got a little more insight that made it even better: We knew the dog’s name was Meg, but the bunny? The bunny’ s name is John Stamos. RIP us, we have passed away. (via Facebook)

4. Is Kylie Jenner getting rid of her pout? This cryptic Instagram post has got us wondering. Kylie posted an older photo of her natural lips, with a Photoshopped image of her famous temporary injection-pouted lips flying away with wings. LOL. The caption reads “Fly away my friend,” and when you combine this with the teen franchise‘s desire to go more natural this year, it seems like she might be ditching the pouty look for good. While we’re obviously happy to let Kylie do whatever she wants in terms of beauty, we would be especially excited to see her embrace her natural gorgeousness. She’s got lots of it.

5. This Beautyblender hair dye hack is so freaking cool. UK hairstylist Jamie Stevens is getting a lot of attention for his seemingly simple technique for perfect-looking strobing — cut a Beautyblender sponge in half, and use the flat edge for pressing the colored dye into whatever hair chunks you’d like. The outcome is honestly amazing, and while we’d still proooobably not try this at home, seeing a stylist DIY a dye job like this would be cool. (h/t Refinery29)

6. Quote of the day: “My message for women who have had something happen to them, is that when they are at a point that they feel they’re ready to share it, they’re going to have such a fantastic load lifted from them, that they’re no longer going to feel like they’re carrying a secret; in the best possible way.” — Lucy Decoutere, the first alleged victim to publicly identify herself in the Jian Ghomeshi case. (via Halifolks)