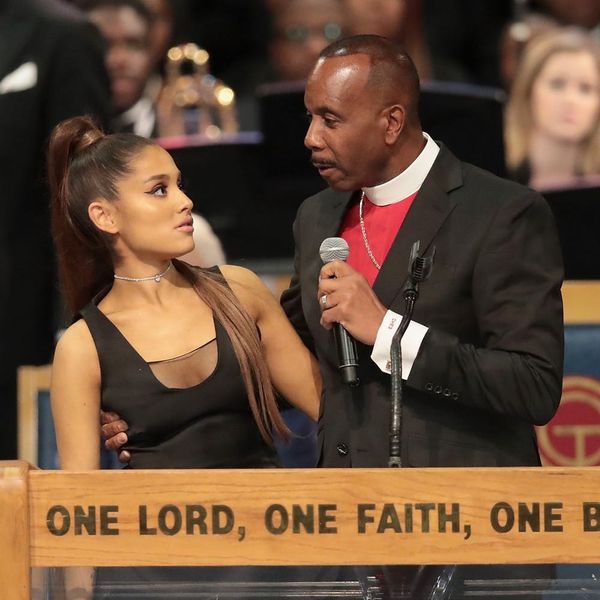 The world celebrated Aretha Franklin’s legacy on Friday, August 31, in a star-studded funeral service fit for a queen, but the unforgettable ceremony in Detroit, which included performances by everyone from Stevie Wonder to Ariana Grande, wasn’t without controversy.

After Grande belted out an impressive rendition of one of the Queen of Soul’s biggest hits, “(You Make Me Feel Like) A Natural Woman,” she joined Bishop Charles H. Ellis III at the podium. The bishop placed his arm around the singer and, in doing so, appeared to touch the side of her chest.

Viewers immediately took note of the incident and called out the bishop for the placement of his hand on her body. Ellis addressed the controversy and issued an apology in an interview with the Associated Press later that day, saying, “It would never be my intention to touch any woman’s breast. I don’t know, I guess I put my arm around her. Maybe I crossed the border, maybe I was too friendly or familiar, but again, I apologize.” He concluded, “The last thing I want to do is to be a distraction to this day. This is all about Aretha Franklin.”

But it didn’t end there: He was also criticized for cracking a joke about the 25-year-old’s name. When she joined him on stage, he quipped, “When I saw Ariana Grande on the program, I thought that was a new something at Taco Bell.” Fans did not find the comment particularly funny.

The bishop apologized for that incident, too, telling the AP, “I personally and sincerely apologize to Ariana and to her fans and to the whole Hispanic community. When you’re doing a program for nine hours you try to keep it lively, you try to insert some jokes here and there.”