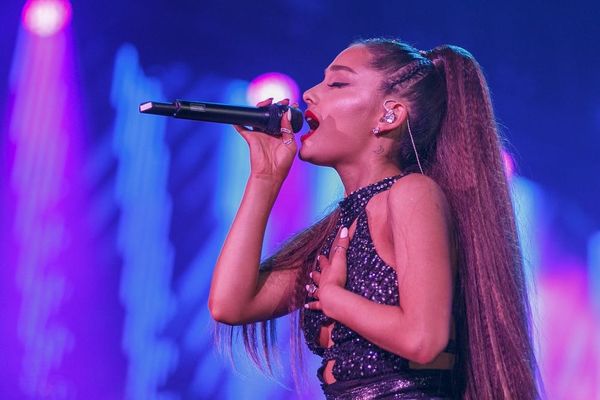 Ariana Grande is already spoiling us with new music in 2019, and in her new single “7 Rings,” she sings about also spoiling herself and her friends as she celebrates her independence and success.

“7 Rings” kicks off with a familiar hook as Grande borrows the melody from The Sound of Music‘s “My Favorite Things,” singing, “Breakfast at Tiffany’s and bottles of bubbles / Girls with tattoos who like getting in trouble / Lashes and diamonds, ATM machines / Buy myself all of my favorite things.” Later, she boasts, “Write my own checks like I write what I sing … see it, I like it, I want it, I got it.”

The video, drenched in neon pink lighting and stacked with diamonds, is a luxurious recreation of the real-life inspiration for the song. Grande previously revealed that she bought diamond friendship rings for six of her friends (and herself) while shopping at Tiffany and Co. (and after drinking too much champagne) in NYC one day.

“It was very insane and funny,” she tweeted to her fans. “On the way back to the [studio], [singer] Njomza was like ‘B**ch, this gotta be a song lol.’ So we wrote it that afternoon.” The video was directed by Hannah Lux Davis, who also helmed Grande’s smash hit clip for “Thank U, Next.”

For the most part, the singer’s fans seem to love the new song, even if they can’t necessarily relate to the lavish lifestyle it promotes.

“Me listening to #7Rings and singing ‘I got my receipts, be lookin’ like phone numbers,’ like I don’t have a grand total of $6.47 in my savings account,” one fan tweeted. Another shared a pic of Grande smiling sweetly while staring into the distance and joked, “Ariana called all of us broke and we’re not complaining.”

Watch the video for “7 Rings” above.

What did you think of Ariana’s new song and video? Let us know @BritandCo!