As Parkland Teens Up Their Activism, Pressure Mounts for Politicians 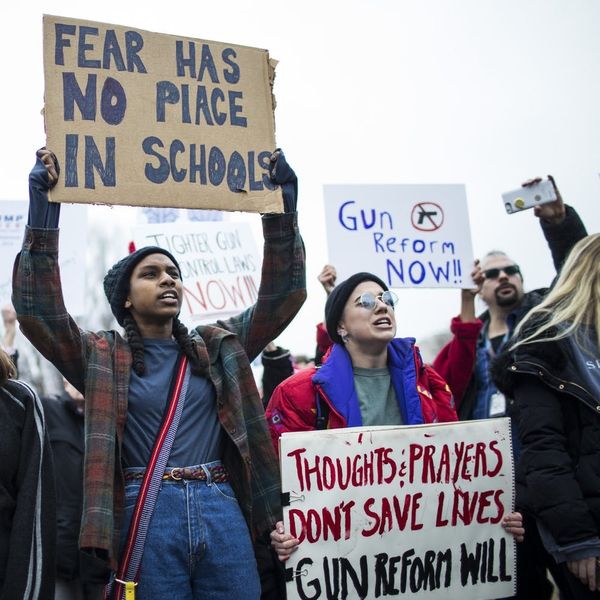 In the weeks following the tragic massacre at Marjory Stoneman Douglas High School on February 14, two notable trends have emerged: The teen survivors of the shooting have emerged as vocal gun regulation activists, and a number of politicians across the political spectrum have been made a highly public effort to meet with the students and their families.

The teens and their loved ones are demanding gun reform in the form of stricter laws, and conservative politicians have been going against their typically firearm-friendly political leanings to hear the young activists out. However, these meetings really haven’t been going very well for politicians, including Marco Rubio, President Trump, and Betsy DeVos, as the Parkland activists’ call for gun control grows ever louder.

Here’s a look at some high profile politicians who have met with Douglas High School students and families and what the response has been.

On February 21, a week after the shooting at Douglas High School, students from the school participated in a CNN town hall that also included NRA leadership and Florida Senator Marco Rubio. Things really didn’t go well for Rubio, who was booed after he told the parent of a student who was killed in the shooting that school shootings “can’t be solved with gun laws alone,” NBC reported.

That parent, Fred Guttenberg, has since put Rubio on blast after the senator claimed he had called the Guttenberg family to offer condolences. On Wednesday of this week, Guttenberg told MSNBC‘s Joy Reid that Rubio in fact “never called.” In the same interview, Guttenberg gave Reid a message for Rubio: “You have no business being involved in this if you can’t be productive.”

Also one week after the shooting in Parkland, President Trump held a “listening session” with kids and families who have been impacted by gun violence in schools, including students and parents of students who survived the shooting at Douglas High School.

Things got a bit embarrassing for Trump when a photo circulated of Trump’s notes for the session. One of the notes read “I hear you,” suggesting the president needed to be instructed on how to appear as if he’s listening to others.

Better view of Trump's "I hear you" notes from AP. pic.twitter.com/XN55aA9wcO

A few days later, a survivor of the Parkland shooting said that when Trump called her on the phone, his words rang hollow. The student, Douglas High School senior Samantha Fuentes, told CNN that “I can’t say I was consoled or helped” by the call.

“It was definitely clear in that moment because he did not express any real empathy. It is kind of hard to express empathy when you don’t understand,” Fuentes added.

On Wednesday, Education Secretary Betsy DeVos made an appearance at Douglas High School to defend the White House position that some teachers in public schools should be armed in a response to school shootings.

During a press conference held for DeVos at the school, the secretary said: “I think to say ‘arming teachers’ is an oversimplification and a mischaracterization really,” according to CNN.

But then DeVos went on to contradict her own words: “I think that the concept is to, for those schools and those communities that opt to do this… to have people who are expert in being able to defend and having lots and lots of training to do so.”

Meanwhile, students in Florida have already said they think arming teachers is “a terrible idea.” Regardless, Florida politicians just passed a bill that would allow some school staff to be armed. Needless to say, a number of Douglas High School students weren’t excited about DeVos’ visit to defend legislation they’ve already said they don’t want to see implemented.

Alyson Sheehy, a Douglas High School student and editor of the school’s yearbook, was one of the student press members who followed DeVos during her visit, and she wasn’t impressed.

“It was a publicity stunt, really. There was no point to it,” Sheehy told TIME. Sheehy also said that DeVos “was kind of just walking around the school and not talking to anybody.”

Was so great meeting @FLOTUS and @POTUS @realDonaldTrump. They're true Patriots. Thank you @KellyannePolls, I owe you the world. pic.twitter.com/J3fhJfGeH6

One meeting that did go well for all parties present was between Douglas High School student Kyle Kashuv and Donald and Melania Trump on March 8. Kashuv has been praised by conservative outlets such as Red State and Fox (he appeared on Fox and Friends this morning) for not being aggressive toward conservative politicians who are backed by the NRA.

On Monday, Kashuv told Town Hall, “I consider myself conservative, but I still want to reach the middle ground here, and that’s my end goal: To reach a proper solution that is bipartisan. There is a middle ground.”

After Kashuv met with the president and first lady, FLOTUS tweeted that it was “Wonderful to meet @KyleKashuv today. His message of unity is one we should all share,” along with four photos.

What do you think about politicians meeting with Douglas High School students? Tell us on Twitter @BritandCo.

Elizabeth King
Elizabeth King is a politics, history, and culture writer based in the Twin Cities. She is generally pretty cranky but still enjoys traveling, music from the early 2000's, and plotting the resistance. Feel free to say hi on Twitter at @ekingc or check out some of her work at www.elizabethcking.com.
Activism
Politics
Activism Controversy Politics
More From Politics