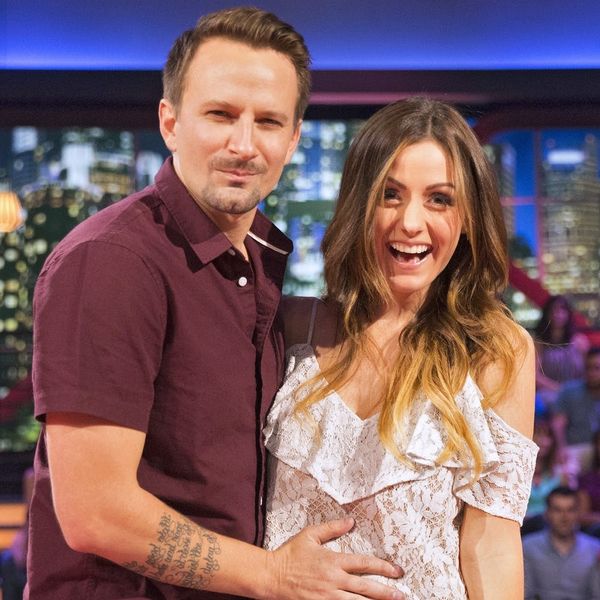 Like the rest of Bachelor Nation, we’re super excited that another Bachelor in Paradise baby is on the way. We were thrilled when Carly Waddell and Evan Bass revealed that they’re expecting their first little one, and again when they announced that they would be welcoming a baby girl into the world. Now Waddell is sharing more with fans online, in the form of her very first bump pic.

Well, I'm either having a baby or just ate chipotle 🤰🏻 (either way seems I'm winning at life 💁🏻)

“Well, I’m either having a baby or just ate chipotle 🤰🏻,” the 31-year-old joked in the caption of an Instagram pic of herself, proving that she’s lost none of the silly humor that led to finding love with her equally quirky new husband. She added, “Either way seems I’m winning at life 💁🏻” — and TBH, we couldn’t agree more. (She used a similar joke on Twitter, writing, “Bump be dum bum bummmmp. But I also may have just had a burrito.”)

Fans are definitely excited to see Waddell documenting her pregnancy on social media. Just last week, one follower tweeted about “waiting for @carlywaddell to post a bump pic,” to which the BIP alum replied, “I’m waiting for a bigger bump!”

The couple, who met on the third season of BiP, have been very open with fans about their relationship, both online and on TV. When they tied the knot in June in a wedding officiated by the reality series’ host, Chris Harrison, the nuptials were filmed for the fourth season of the Mexico-based Bachelor spinoff.

And that was only the beginning. The proud parents-to-be also made an appearance on the show not only to announce their big baby news, but also to have an ultrasound done in front of a live studio audience. So who knows what else we’ll see from this TV-lovin’ family in the future?

When you find out it's a girl....and he's already thinking about prom night @theebass 😂

It’s been a nonstop ride of joyous occasions for the lovebirds so far, and with their baby girl due to make her big arrival in February 2018, it doesn’t look like that will end anytime soon.

Congratulations again to the sweet family!

Do you love when celebs share their baby bump pics with fans? Let us know @BritandCo!