Save Gotham City With This Batman and Batgirl Couples Halloween Costume 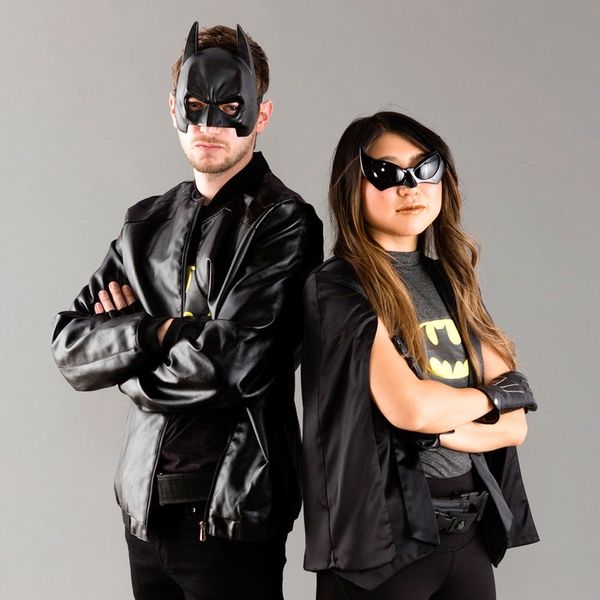 This Halloween, grab your S/O or your BFF and dress up as the two coolest caped crusaders! This costume is really doable, and you might already have most of the pieces in your closet. Ready to save Gotham City? Let’s do this!

I didn’t want to go *too* literal when putting together these costumes. Practically speaking, it’d be hard to walk around all day with a cape and armor. For Batman, I dressed Motion Graphic Artist Simon in black skinny jeans from Old Navy, a Kjdshwan Leather Jacket ($30) from Amazon, and Globalwin Combat Boots ($30) from Amazon.

I ironed-on a Batman logo on a black t-shirt and bought a UTG Pistol Belt ($15), a Batman Costume Mask ($5), and Milwaukee Leather Fingerless Gloves ($11) from Amazon.

Commissioner Gordon is calling… Batman, we need you!

Batgirl’s outfit is just as accessible and fashion-forward! I dressed Visual Designer Torii in a Haoduoyi Cap Blazer ($21), ROF Over-the-Knee Boots ($30), and leather gloves ($9), all from Amazon. I picked up some black workout leggings with mesh cutouts and ironed on a Batgirl logo on a dark gray turtleneck. I topped off the look with a pair of Batman Sunglasses ($8) and slung a UTG Pistol Belt ($15), both from Amazon.

Which superhero will you and your boo dress up as for Halloween? Share your photos on Instagram using #britstagram, and check us out on Pinterest for more DIY costume inspo.