Le Creuset Is Launching New “Beauty and the Beast” Cookware 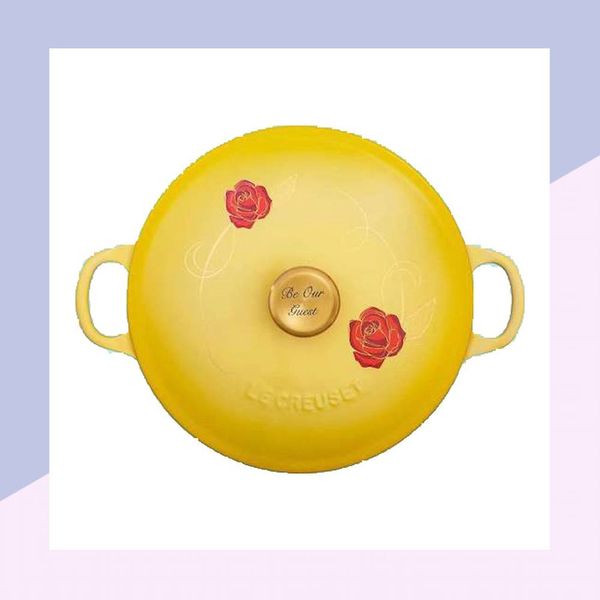 The live action remake of Beauty and the Beast (now on Netflix) spawned plenty of products for fans of the movie to fawn over, with everything from movie-themed bedding, fine-china sets, and rose-shaped makeup brushes cropping up all over the internet. Now, the trend has expanded to your kitchen, with a new addition to Le Creuset‘s fairy-tale-inspired cookware collab with Williams Sonoma.

After giving Disney fans a taste of the magic earlier this year with a beautiful, limited-edition blue enameled cast iron pot (above, $28) emblazoned with the flick’s famous roses and engraved with the words “Be Our Guest,” the brands are partnering up once more to releasing a brand new version of the pot that’s finished in Soleil yellow, a color that bears a striking resemblance to Belle’s ballgown. It will hold 2 3/4 quarts of whatever your heart desires, so you’ll have plenty of room to invite all your friends and family to be your guest for dinner.

“We realized both Le Creuset and Disney fans are hungry for more, which led to the creation of the soup pot inspired by Belle’s beautiful yellow dress,” said Le Creuset of America CEO Faye Gooding.

Consequently, the brand doubled its stock of the soup pot, releasing 1,000 over the blue style’s 500. Still, you’ll want to act fast to ensure you snag one: Shop the pot September 15 for $280 at Le Creuset.

What do you think of Le Creuset’s BATB creation? Tell us @BritandCo!

Shea Lignitz
Shea can be found in the nearest bookstore or brewery, exploring the great outdoors, or blasting Led Zeppelin. She grew up in the cold and rain of Northern California's redwoods but is currently wandering around Texas.
Baking
Home News
Baking Disney
More From Home News