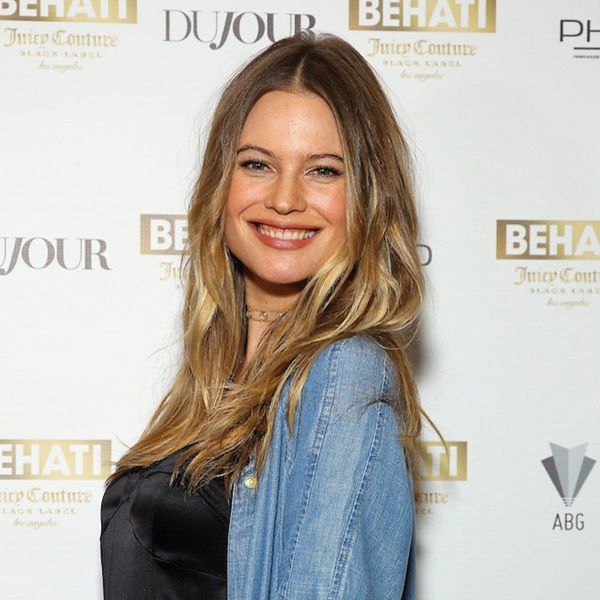 1. It may be a barely-there bump, but it’s a bump! Victoria’s Secret Angel Behati Prinsloo brought her growing baby bump to the red carpet last night to launch her Behati Juicy Couture Black Label brand. Her and husband Adam Levine announced they were expecting their first child just a few weeks ago, and what better way to celebrate than stepping out in this slinky black dress and strappy heels? Though she’s barely showing yet, we can definitely already see this kid’s amazing bone structure. (Photo via Dimitrios Kambouris/Getty)

2. Kelly Rowland doesn’t think her Destiny’s Child style has aged all that well. Look, we all look back at old photos and cringe. The bad hair choices. The clothing. The very dated make-up looks we were trying to pull off. And while we try not to live with regret, it doesn’t mean we can’t learn, and celebs, though often professionally assisted with their terrible choices, tend to feel the same way. “I looked crazy,” Kelly Rowland admits now to People of some of her, shall we say, less subtle Destiny’s Child make up choices. “I looked like a monster in one picture. I remember Destiny’s Child went to the Brit Awards, and we tried to do our faces ourselves — I looked crazy. So I had to learn!” Her useful advice to herself, if she could give it? “Less makeup is more. As women, we have the best intuition, so just go with it. There’s nothing wrong with it, you’re spot on.” (h/t People, photo by Scott Gries/Getty)

3. Emma Roberts is desert ready! The Scream Queens actress debuted a longer, darker head of hair on her Instagram, saying that “change is always a good idea.” We couldn’t agree more! The color, called Desert Rose, is thanks to stylist Nikki Lee, who says she created the hue just for her. “Just in time for Coachella!” Lee said in her Instagram caption, making the name all the more appropriate. (via @nikkilee901)

4. Instagram’s website just got a little bit better. One of the best things about Instagram is that it’s primarily always been mobile-only, exercising a tiny bit of control over the “Insta” part of it. But wouldn’t it be nice to save a little phone battery while you’re at work at your computer all day? The latest update to their website makes it useful for a little more than just browsing photos — you can now get notifications if people follow, tag, like or comment on your posts. Actually, now that we mention it, maybe we don’t need this additional distraction at our computers… (h/t TechCrunch)

5. This Harry Potter nursery is both a little bit spooky and a LOT brilliant. So it’s a little darker than your traditional nursery color palette, but this Harry Potter-themed nursery is absolutely adorable. “My husband and I made the decision that this would be our last baby,” Tiffany told BuzzFeed. “He’s our fourth, so I decided it was now or never for a Harry Potter nursery.” And they really went for it. It took them two months to complete, and no detail has been spared, something that was important to Tiffany because the series “completely changed her life.” Too cute! (h/t Buzzfeed)

6. Quote of the day: “Tell her you have a real big interest in her, and you want to know if she’d like to date you!” — Kids giving advice on how to tell someone you like them.

What news stories are getting you going for your day? Let us know @BritandCo!