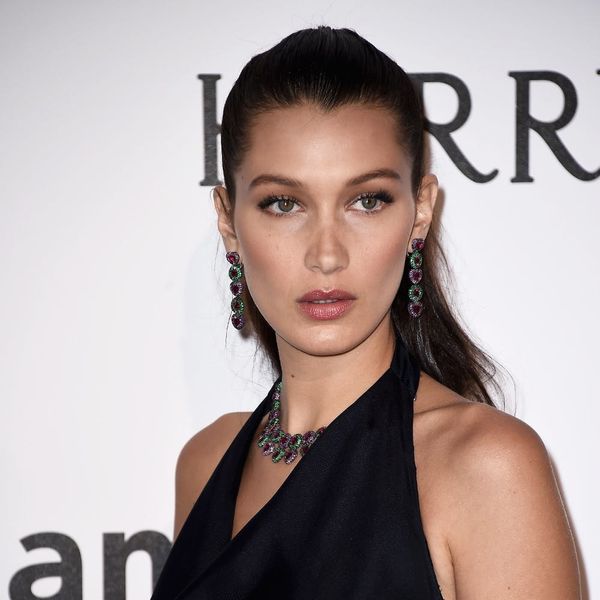 While celebs like Blake Lively, Kendall Jenner and big sis Kim K have been keeping us glued to Cannes coverage of all kinds, Bella Hadid stunned on the red carpet in a dress that was a light breeze away from (over)exposing her bits. If the pics gave you dress déjà vu, there’s a very good reason for that. Fashion folks and celeb-watchers alike will have flashbacks to Rita Ora’s outfit at the 2014 VMAs.

Granted, it’s not the exact same dress. Bella’s gorgeous fire-engine red slip dress was an Alexandre Vauthier creation. When Rita Ora appeared at the VMAs back in 2014, she was wearing a Karan Atelier gown. But as the fabric, color and design are all strikingly similar, it appears as though the two are red-carpet risk-taking twins.

Their choice of accessories is where things change up a bit. Bella posed in mile high black stilletos, frosted dangling earrings, a diamond bangle and a French Riviera chic updo, while back in 2014, Rita opted for matching red heels, ruby studs, LOTS of rings, a prominent diamond choker (perhaps the choker trend was already coming back?) and slicked back hair. No contest, both ladies slayed the look!

Do you think this look worked better on Bella, Rita, or did both ladies slay? Tweet us @BritandCo!

Desiree O
Desirée O is a ‘Professional Bohemian’ who loves anything and everything related to the arts, entertainment, and pop culture. She ADORES being a ‘Newsy’ for Brit + Co, covering all of the latest tidbits of awesomeness that you want to read about. When she’s not writing, she’s either making messy art, going on long adventurous walks with her camera, or poking around over at bohemianizm (http://www.bohemianizm.com/). You can find out about Desirée O and her work at http://DesireeO.com/ or follow her on Twitter @DesireeO.
Celebrity Style
Celebrity News
Celebrity Style