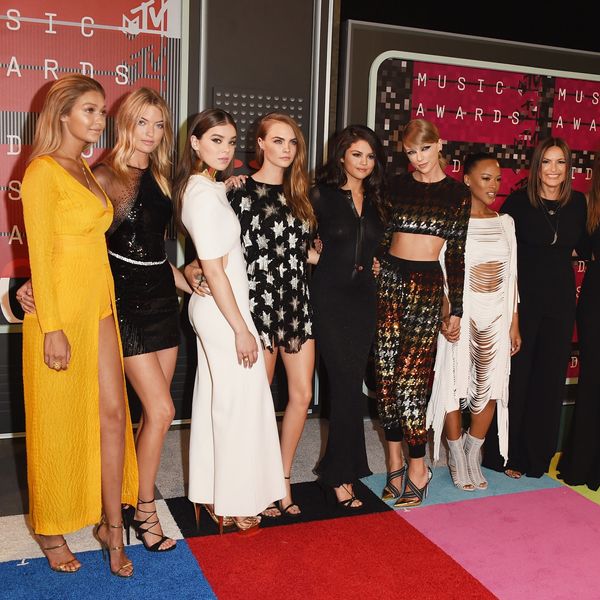 Every award show or big premiere boasts its fair share of star-studded red carpets and, of course, impeccable style. Celebs and the fashion set bring it for the year’s most-noteworthy events, pulling out all the stops and delivering jaw-dropping gowns, luscious locks and on-point makeup — needless to say, we can’t get enough. From the Oscars to the Grammys and everything in between, each event is an opportunity to up the ante, and they never disappoint. And while there’s excitement in watching your favorite celebs strut their stuff out on the red carpet (and rehashing every detail with your besties and the Fashion Police crew), the real fun comes at the end of the year — reliving all the most striking moments and basking in all those glam, OMG-worthy gowns. Get ready, because these 18 best-dressed picks are some serious stunners.

1. Taylor Swift: In addition to scooping up awards left and right this year, the 1989 songstress also had some major red carpet successes. While classic black and white ruled supreme on the Grammys red carpet, Taylor shined bright in a stunning blue high-low gown. (Photo via Jason Merritt/Getty)

2. Lea Seydoux: Bond girls are notorious for bringing it in the style department, and French actress Lea Seydoux is no different. Between cut outs and an eye-catching yellow color, she totally nailed her British Academy Film Awards look. (Photo via Tim P. Whitby/Getty)

3. Beyoncé: Making an entrance is kind of what Queen Bey does, and her appearance at the Met Gala this year seriously stole the spotlight thanks to a barely-there gown encrusted with sparkling gems (oh yeah, and showing up a little more than fashionably late). (Photo via Dimitrios Kambouris/Getty)

4. Marion Cotillard: When it comes to style, you’d expect nothing less than perfection from Dior muse and French bombshell Marion Cotillard. While the white polka dot gown she sported on the Oscars red carpet was perfectly on point, her Giambattista Valli followup was equally as standout with a flared drop-waist, tie-front and glitzy sequin top. (Photo via Pascal Le Segretain/Getty)

5. Zoe Kravitz: Ordinary just isn’t Zoe Kravitz’s thing, so you can always expect her to step out in an ultra covetable and undeniably fashion-forward getup. This shimmery chainmail-inspired number strikes just the right balance of glam and badass. (Photo via Larry Busacca/Getty)

6. Sienna Miller: The British actress took her style to new heights in 2015, stepping out in a series of unique gowns at the Cannes Film Festival in Cannes, France. This strappy halter number takes the cake with its playful kite embellishments and bright colors. (Photo via Pascal Le Segretain/Getty)

7. T-Swift Squad: The girl squad to end all girl squads gave everyone major FOMO by dominating the red (okay, multicolored) carpet at this year’s VMAs. The girl power was *real* and so was the style — from sleek jumpsuits to sassy layered gowns and fringe-flecked frocks, the girls let their impeccable sartorial sensibilities shine. (Photo via Jason Merritt/Getty)

8. Amal Clooney: As if brains (the girl’s resume is stacked) and beauty weren’t enough, Amal knows a thing or two about fashion too. Her Grecian one-shoulder gown and white glove combo at the Golden Globes was the picture of elegance. (Photo via Jason Merritt/Getty)

9. Rihanna: Between her over-the-top Met Gala look and this larger-than-life dress at the Grammys, Rihanna wasn’t settling for anything less than attention-grabbing in 2015. (Photo via Jason Merritt/Getty)

10. Keira Knightley: Walking a red carpet when you’re, you know, making a human seems like it would be exhausting, but Keira Knightley made pregnancy style look more than effortless in this ethereal Valentino dress. (Photo via Jason Merritt)

12. Lupita Nyong’o: Girl is turning into a major fashion icon. Her pearl-studded Oscar gown earned her some major style cred in 2015, but it was this gilded after-party getup that really grabbed our attention. Simple, sophisticated and diva-approved — it was a recipe for sartorial success. (Photo via Pascal Le Segretain/Getty)

13. Haim: The coolest sister band around proved that glitzy gowns aren’t the only way to knock your red carpet look out of the park. (Photo via Larry Busacca/Getty)

14. Dakota Johnson: The Fifty Shades of Grey star showed us that red is truly her color at this year’s Oscars in a standout Saint Laurent column gown with dazzling jeweled embellishments. (Photo via Jason Merritt/Getty)

15. Liya Kebede: The model and LemLem founder did the Cannes red carpet her way, redefining glamour with this Proenza Schouler stunner. The textured, modern midi dress was a refreshing step away from the festival’s standard ball gowns and ethereal frocks. (Photo via Pascal Le Segretain/Getty)

16. Diane Kruger: Effortless and incredibly chic — Diane Kruger’s style in a nutshell. She busts out some of the most noteworthy looks every year at Cannes, and 2015 was no different with this sequin-studded Prada halter gown turning heads left and right. (Photo via Andreas Rentz/Getty)

17. Amber Heard: The Texas native and The Danish Girl actress took fall florals to the next level with an elegant A-line gown by Alexander McQueen and a faux-hawk updo with a badass edge. (Photo via Tristan Fewings/Getty)

18. Jennifer Lopez: For the 2015 Oscars, JLo traded out her typical skin-baring styles for an ethereal Elie Saab with flowing tulle and shimmering sequins. She kept the timeless look feeling fresh with glowing skin and a playful ponytail. (Photo via Jason Merritt/Getty)

Which celeb do you think deserves the award for best dressed in 2015? Tweet us at @BritandCo!

Libby MacCarthy
Libby MacCarthy is an urban planner turned writer with a love (bordering on unhealthy obsession) of all things fashion and beauty related. She lives for perfectly brewed coffee, farmer's markets, dinner parties and perusing impeccably designed boutiques. When she's not on the hunt for the latest trends, you'll likely find her plotting her next adventure or nose deep in a book. Libby currently splits her time between the East Coast and her adopted home of France. Follow her daily adventures on Instagram.
Style News
More From Style News