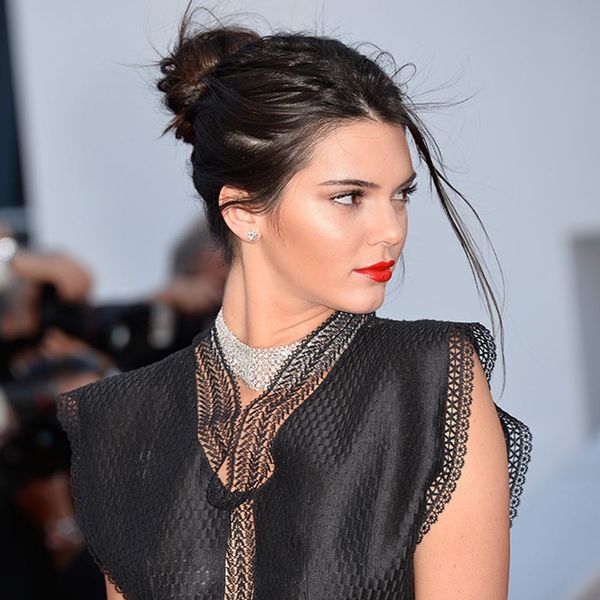 At Cannes, it’s not just the award-winning films and gorgeous gowns we’re after. It’s also the place to spot some of the latest hair and makeup trends. Seriously, the celebs didn’t hold back this year, and we’re loving the glam vibes. From bold red lips to laid-back beach waves and vibrantly lined eyes, here are some of our favorite beauty trends from the Cannes Film Festival 2015 festivities.

2. Bold Lipstick: Nothing says glamorous star of the silver screen quite like a red-hot lip. Celebs were rocking the look to give their daytime duds a little extra oomph. (Photo via Tristan Fewings/Getty)

3. Beautiful Braids: The perfect way to pare down the edge of a fashion-forward look is an ultra-romantic updo. Lea Seydoux and Poppy Delevigne both had the right idea, pulling their luscious locks back into untamed braided styles. (Photos via Pascal Le Segretain/Getty, Neilson Barnard/Getty)

4. Eye-catching Eyeliner: Really want to make those eyes pop? Follow Aishwarya Rai’s lead and line those peepers with some statement-making liner. You’ll get extra bonus points for complementing your eye color and your outfit. (Photo via Neilson Barnard/Getty)

5. Sleek Hair Accessories: The time of the barrette has definitely not passed, at least not if you ask Lindsay Ellingson. A super-sleek hair accessory played up the tough-as-nails edge of her striking quicksilver dress, while adding a polished touch to her unfussy ponytail ‘do. (Photos via Neilson Barnard/Getty)

6. Sassy Cat Eye: Barbara Palvin was channeling her inner femme fatale out on the red carpet, turning heads with a look-at-me cat eye and an equally as striking sheer gown. The look on its own is incredibly fierce, so keeping the rest of your makeup low key is a must to avoid going too over the top. (Photo via Pascal Le Segretain/Getty)

8. Glowing Skin: With a seaside locale like Cannes, glowing skin is a must. Karlie Kloss knocked it out of the park with rosy cheeks, a pink pout and just a touch of bronzer. (Photo via Clemens Bilan/Getty)

9. Earthy Smokey Eye: Ladies like Zoe Kravitz and Rooney Mara may have opted for flowy, lightly-hued frocks, but when it came to their makeup, they really brought the drama. Taking a step back from classic black, they opted for earthy shades of brown, bronze and mauve to create their sultry, smokey eye looks. (Photos via Danny E. Martindale/Getty, Neilson Barnard/Getty)

11. Au Naturale: Natural-looking makeup always goes over well. Cannes might be all about glitz and glam, but red carpet fixtures like Naomi Watts and Emma Stone ditched the dramatic beauty routine for more fresh-faced looks. The results were stunning. (Photos via Pascal Le Segretain/Getty)

Who wore your favorite beauty look during Cannes? Which style will you be giving a try? Tell us in the comments!

Libby MacCarthy
Libby MacCarthy is an urban planner turned writer with a love (bordering on unhealthy obsession) of all things fashion and beauty related. She lives for perfectly brewed coffee, farmer's markets, dinner parties and perusing impeccably designed boutiques. When she's not on the hunt for the latest trends, you'll likely find her plotting her next adventure or nose deep in a book. Libby currently splits her time between the East Coast and her adopted home of France. Follow her daily adventures on Instagram.
Celebrity Hair
Hair
Celebrity Hair Celebrity Style Karlie Kloss