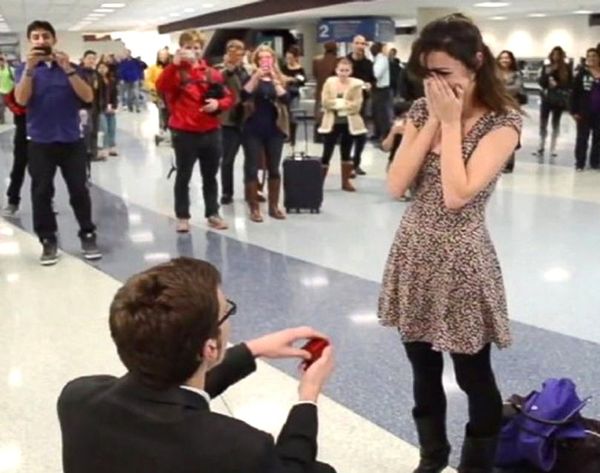 A good story has to have a strong introduction. While life is certainly not a fairytale, the proposal story often can be. From abruptly stopping a play to propose to another character, to trekking 3,000 miles across the country, there were some pretty epic engagements that happened in 2014. Below are the best of the best. Sit back, take in the love and try not to cry if you’re single.

1. Worldly Wedding: Jack Hyer went on a date and instantly knew he was going to marry that woman. So while he traveled to 26 different countries over four years, he took advantage of the epic backdrops and created a proposal video for the ages. No surprise here: She said yes. (via Brit + Co)

2. Lauren Conrad: LC went for a classic ring shot after she and (now-husband) William Tell got engaged. We do like how she spiced up her classic new stone with a delicate “love” ring right next to it. (via @laurenconrad)

3. Peter Pan Proposal: During a performance in Glasgow, Peter Pan broke character to propose to his girlfriend – who just happens to be Wendy! Is this real life? (via YouTube)

4. GPS Grand Gesture: If you were in awe over that first travel proposal, just wait until you see this one. A Japanese artist spent six months trekking 3,000 miles through Japan with a GPS tracker all to spell out ‘Marry Me’ across the country. Good luck beating that one, boys. (via Daily Mail)

5. Instant Replay: If you follow Murad Osmann on Instagram, you know that his pictures are all of him holding his now-fiancée’s hand in dreamy exotic lands. We’re pretty sure this ideal staging wasn’t done in the moment of the proposal, but feel free to relive the moment with them and get ready to swoon each and every time. (via @muradosmann)

6. Airport Arrival: Watch as a musical boyfriend surprises his long-distance girlfriend with a series of serenades as she arrives at the airport. A bunch of this guy’s musician buddies sing her a song and direct her to a different part of the terminal until she ends up at her man — who gets down on one knee, of course. (via YouTube)

7. Investigated Incident: Maryanne Firth started seeing pieces of plywood with a pink heart all around Ontario. As a reporter, she asked the public to help and even wrote a story about it. One day a sign included an address and time. It’s safe to say she wasn’t expecting what she found. (via Buzzfeed)

8. Printed in the Paper: Brace yourself, Benedict Cumberbatch super fans, the studly actor is officially (almost) off the market. Rather than posting his engagement to Sophie Hunter on Instagram or Twitter, the two announced their engagement in a very traditional manner — with an announcement in the Births, Marriages and Deaths section of British newspaper The Times. (via PopSugar)

9. Instagram Assisted: For this couple Instagram is about much more than just posting delicious looking meals. The two always dreamed of visiting Portland and followed a lot of Pacific Northwest dwellers on the social media platform. When Carter decided he wanted to propose he knew it needed to be there and surprised his girlfriend Brook with a trip. He also cold called someone he followed on Instagram who lived in Portland for some advice and he was so touched he hooked them up with a place to stay and even threw them a party. You can read their full story here. (via Mashable)

10. 21st Century Love: This Toronto-based couple met in a very 21st century sort of way. It all started back in 2007 when Steve Kawalit Poked Nafis Joon on Facebook. The couple fittingly got engaged at Facebook headquarters. (via Mashable)

11. Made for Youtube: For his 1,000th video this vlogger wanted to do something special and boy, did he get his wish. This clever guy lured his future fiancée into his recording studio and pointed to “something weird” on his screen. When she took a look, she read “will you marry me?” Cue the awwws (and millions of video hits). (via YouTube)

12. Surprise Performance: Falling somewhere in between a flash mob and a just totally adorable extravaganza, Bret proposed to his girlfriend with fog, 40 professional dancers, some lip syncing and surprise appearances from her closest loved ones. (via YouTube)

13. UFO Ring Box: Stephen Dempsey recreated the Imperial-II class Star Destroyer from Star Wars out of Legos and fashioned it into the coolest ring box a proposal has ever seen. (via Mashable)

Did you have an epic proposal happen to you this year? Share your story with us in the comments below.