15 Food Memoirs Worth Sinking Your Teeth Into 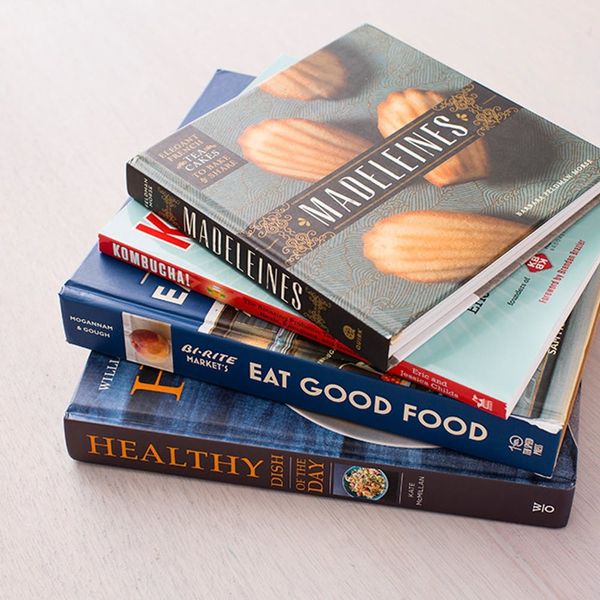 A good meal usually has a good story behind it, but that’s just one of the reasons food memoirs have been on the rise the past few years. With so many cultures using cooking and eating as a form of expression, it helps create some of our favorite, longest-lasting memories. Here, we’ve rounded up 15 of the absolute best food memoirs out there. From the classic Julia Child to the buzzy food blogger Molly Wizenberg, these memoirs are are as easy to devour as your favorite meal.

1. Delancey by Molly Wizenberg ($16): In this book (which has a recipe at the end of each chapter!), Molly Wizenberg reveals what it was like when her husband dropped out of grad school to open up a pizza place. Many, many pizza experiments later, they survived the restaurant’s opening with their marriage in tact. Warning: You will crave gooey, cheesy pizza while reading this, so stock up on the mozzarella.

2. Mastering The Art of Soviet Cooking by Anya Von Bremzen ($12): After growing up in food-scarce Russia, moving to Philadelphia — and later Queens, New York — with her family was quite the shock for Anya. Relishing in the new luxury of having vast cooking ingredients readily available, Anya’s mom starting cooking big Russian family dinners, where Anya, her mom and her grandmother would pass along stories of their family’s history while they cooked and ate. This book is as rich in culture as it is in delicious Russian meals.

3. The Devil in the Kitchen by Marco Pierre White ($14): Yes, there is such thing as a sexy food memoir. The Devil in the Kitchen is the bad goy of the genre, about perhaps the first ever celebrity chef, Marco Pierre White. It’s about his journey from growing up in a working class part of Britain to becoming one of the most respected (and feared) chefs in the game. And it helps explain that temper he’s known for.

4. My Life in France by Julia Child ($11): This one is a classic. Julia Child may be known for helping the ordinary American master French cooking, but it took her a lot of trial and error to become a successful chef. She basically lives out every woman’s dream: moving to France, taking cooking classes at Corden Bleu and eating up all the French culture around her. But her story somehow comes across as 100 percent enjoyable, not braggy. Trust us on this one.

5. It Was Me All Along by Andie Mitchell ($14): This new memoir by Can You Stay For Dinner? blogger Andie Mitchell is getting well-deserved praise for addressing our society’s complicated relationship with food. Mitchell lost 135 pounds, but realized that being thin didn’t bring happiness, busting a huge societal myth that’s prevalent in our culture today. Mitchell tells her story in an honest, relatable way and explains how she went from using food as a comforting tool to developing a practice of mindful eating.

6. A Tiger in the Kitchen by Cheryl Lu-Lien Tan ($12): Author Cheryl Lu-Lien Tan’s personal journey from growing up in Singapore to venturing off to New York City is as juicy as a flaky, homemade pineapple tarte. While so excited to leave her home city behind at 18, in her 30s she begins to explore her past in more ways that one. The result is a rich exploration of the food, culture and family history rooted deep within her.

7. Toast by Nigel Slater ($6): 1960s England may not have been known for its cuisine, but this heartfelt coming-of-age memoir is surprisingly culinarily rich. Chef Nigel Slater writes about his father hiring a housekeeper to do the cooking shortly after his mother died. Nigel and the housekeeper cook together, awakening in Slater a lifelong passion for cooking.

8. Blue Plate Special by Kate Christensen ($13): Novelist Kate Christensen talks about how she cooked her way through various life experiences (both the good and bad), jobs, relationships, moves and family problems. Her memoir shows how food nourishes the soul, not just the body.

9. Blood, Bones and Butter by Gabrielle Hamilton ($13): Gabrielle Hamilton may be the owner of the wildly successful New York City restaurant Prune, but it sure as heck wasn’t easy to get there. Like most of us, Hamilton spent her 20s simultaneously working hard and searching for life’s greater meaning. This led her to many great kitchens all over the world. Get to know the makeshift families who fed her abroad and relish in the struggles and triumphs of opening her own restaurant.

10. The Colour of Food by Anne Else ($18): Anne Else takes up cooking after she gets married at age 19. Her marriage didn’t last, but her love for cooking did, and she cooks readers through the adventures of her divorce, having a child, falling in love with someone new and even meeting her birth mother.

11. Anything That Moves by Dana Goodyear ($13): Dana Goodyear attempts to find out what mealtime means in modern American culture, and her journey leads her to some big foodies in the industry today. From chefs perfecting the latest exotic food craze to forbidden food traffickers, it’s an interesting look at what cuisine means nowadays.

12. Miriam’s Kitchen by Elizabeth Ehrlich ($14): This book came out in the late ’90s, but it’s held up over time. Elizabeth Ehrlich grew up pretty ambivalent about her Jewish history. But when she starts cooking some of her family’s favorite meals, she begins to realize the value in preserving her culture. Spending time in the kitchen with her mother, a Holocaust survivor, also gives her the opportunity to hear stories that are a valuable part of her family history.

13. Eat Pray Love by Elizabeth Gilbert ($10): If you’ve somehow escaped this book-club favorite and the Julia Roberts movie on which it’s based, you really are missing out. Broken after a divorce, magazine writer Elizabeth Gilbert decides to spend extensive time in Italy eating, in India praying, and in Bali… well, she isn’t sure what she’s to do in Bali yet, but the title kind of gives that away. You’ll love going on this journey with her, and will also crave a big bowl of pasta afterwards.

14. Burnt Toast Makes You Sing Good by Kathleen Finn ($20): Kathleen Flinn includes three generations of family recipes in this memoir about her wacky-yet-lovable family. The Midwestern family treks across the country during a big move, meeting lots of colorful extended family members and cooking up tons of food. It’s one entertaining read.

15. Licking the Spoon by Candace Walsh ($13): Walsh describes how, growing up, she had an old-fashioned view of what womanhood should be, idolizing women like Betty Crocker and Martha Stewart. But despite her faithful devotion to traditionalism, her life didn’t turn out as she planned. Her journey through marriage, motherhood, divorce and a new relationship with a woman is captured in this heartwarming memoir.

What’s your favorite foodie book? Share with us in the comments below!

From Your Site Articles
Emily Laurence
Emily is a contributing writer for Brit + Co and former teen magazine editor. She lives in New York City, where she's on a mission to find the most delicious mocha in the East Village.
Books
Recipes
Books Family
The Conversation