Why the Best Way to Explore Europe Is by Train 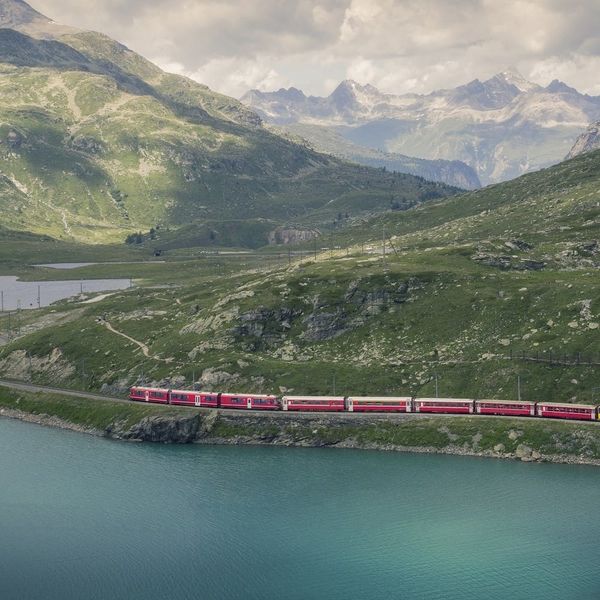 Most of us when we travel are simply trying to get from point A to point B as quickly as possible, which usually makes flying the default mode of transportation. But when you add in commuting time to and from the airport, baggage fees, small seats, and overly chatty seatmates, there’s still much to be desired in the average flight.

Trains, on the other hand, provide an experience that is more leisurely from start to finish, in which the journey can be just as memorable as the destination. Especially throughout Europe, where the rail system is extremely extensive, trains offer a unique opportunity in our otherwise instant-gratification-obsessed, fast-paced society — the ability to slow down, take in the scenery, and see parts of the world you normally wouldn’t see. Pinterest reported a 136 percent increase in searches for train travel in 2018, an indication that people are embracing that rail life. For your next European adventure, here are nine reasons you should hop aboard as well.

1. Options and Cost: If you like to have options, train travel will give you plenty of them. The Eurail pass, for example, is a pass that gives you access to explore 28 different countries on a variety of regional, high-speed, and night trains. It was created in 1959 to encourage non-European residents to travel “for the sake of curiosity and learning.” As such, there is a multitude of different passes available for any budget: You can get a single-country pass; a select pass that allows you to visit two to four adjacent countries; or the global pass, which essentially allows you to explore the entire continent within a certain timeframe. These passes are often cheaper than booking several one-way plane tickets. There’s a tool on Eurail’s website to help you figure out what pass makes the most sense for you, and there are even sample itineraries in case you need a little inspiration (for the record, the most popular city destinations are Paris, Munich, Florence, Milan, and Rome). With a Eurail pass, you also get discounts on certain hotels, museums, and other attractions.

2. Flexibility: Unlike plane tickets, which have to be purchased way ahead of time to avoid exorbitant prices, for many train routes, you can roll up to the station the day you want to leave. There are exceptions, of course: If you want to guarantee your seat, are traveling during high season (June-September), or are taking a high-speed or night train with sleeping accommodations, you’ll need to make a reservation. But if you choose to stay in Paris an extra night or want to take a day trip to a small town your BFF’s boyfriend’s sister insisted was a hidden gem, with the right Eurail pass, you can usually make a last-minute change to your itinerary without incurring a ton of extra stress or money. And because of the frequency of trains running, if you happen to miss one, there will probably be another one not too far off.

3. Views: Sure, flying gives you a birds-eye view of the Earth, but once you reach a certain elevation, you’re pretty much staring at one nondescript cloud after another. For hours. Riding a train gives you a more scenic and grounded look at a country — in Europe, that’s anything from small farm towns, to rolling countrysides, bustling cities, snow-capped Alps, lakes, fjords, and more. As you pass through different cities, countries, and borders, you’ll never get bored looking out the window.

4. Can Be Faster Than Flying: According to GoEuro, a travel search engine that compares prices for trains, buses, and flights, there are certain routes in Europe that are faster by rail than by air. When you factor in wait and airport transit time, for example, the flight time from Barcelona to Madrid is about 3:35 while train time is 2:30. And the popular London to Paris route takes 3:57 by plane and 2:16 by train. Those saved hours can mean an extra croissant (or deux).

5. No Security Screening: Even with TSA pre-check, no one likes going through the hassle of getting your body or luggage screened, only to be flagged for packing a tube of toothpaste that is 0.5 ounces too large. With the train, you can show up at the station 10 minutes before departure time and just get on board.

6. No Baggage Restrictions: You don’t have to worry about extra baggage fees or making sure your suitcase is under a certain weight. The luggage racks are generally roomy, so you’re only limited to how much you can physically carry. That also means you aren’t restricted to a small bag of three-ounce liquids, and more importantly, you can carry on an entire bottle of wine if you choose to do so.

7. Centrally Located: While airports tend to be located on the outskirts of major cities, train stations are usually near the center of town, which helps cut down commute time both to and from the station. Even if you need to grab a taxi to head to your hotel, it’ll likely be a short ride.

8. Comfort: If you’re flying economy, you’re likely sitting in an uncomfortably upright position in a narrow seat, hoping the person in front of you doesn’t fully recline and decrease your already minuscule amount of personal space. Train seats tend to be larger than plane seats and have ample legroom, even if you’re not traveling first class. There are usually outlets, WiFi, tables, and food. You can get up and stretch your legs at any point during the trip, not just when the fasten seatbelt sign is off, and there are also dining cars if you want to sit down, grab a bite, and make some new friends who are traveling in the same direction. The overall environment is more relaxed and, as a result, you’ll actually want to chat with the people around you. Plus, you’ll never have to deal with turbulence.