Bill Gates’ Top 2016 Reads Cover Everything from Shoes to Leadership 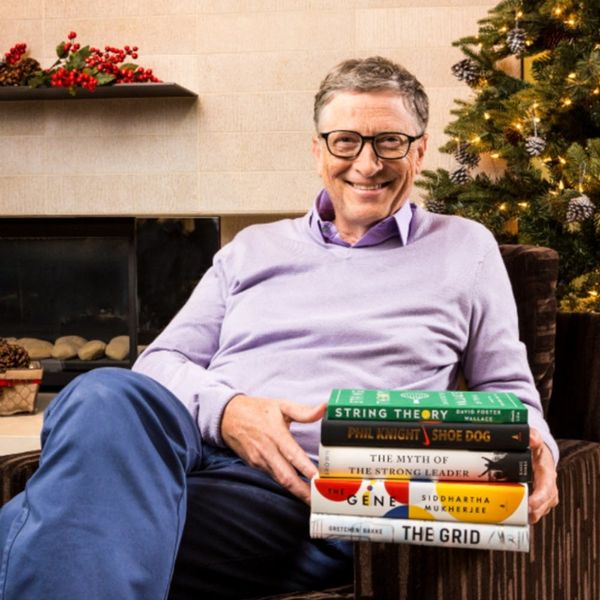 As an avid bibliophile and casual stalker, we love checking out what our favorite peeps have on their bookshelves. Now that we’ve already covered what Mark Zuckerberg, OITNB star Uzo Aduba and the literary Emmas (Emma WatsonandEmma Roberts) have binge read this year, we’re super excited to see what tech icon Bill Gates put on his 2016 must-read list.

1. String Theory by David Foster Wallace ($16): No, you don’t have to be Sheldon Cooper to enjoy this book. In fact, it actually has nothing to do with physics at all. String Theory is a collection of five of Wallace’s essays on tennis. “You don’t have to play or even watch tennis to love this book,” writes Bill… even though the tech giant himself is currently getting back into the sport after giving it up during his Microsoft days.

2. Shoe Dog by Phil Knight ($9): Written by the co-founder of Nike, this popular memoir gives readers an inside look at what being a CEO is really like. “I’ve met Knight a few times over the years,” remarks Bill. “He’s super nice, but he’s also quiet and difficult to get to know.” But not in this book. “Here Knight opens up in a way few CEOs are willing to do. It’s an amazing tale.”

3. The Gene by Siddhartha Mukherjee ($21): Doctor, teacher and researcher Siddhartha Mukherjee takes us on a journey through the history of genome science in this compelling read. “Mukherjee wrote this book for a lay audience,” writes Bill — meaning us, the non-genome experts — “because he knows that the new genome technologies are at the cusp of affecting us all in profound ways.”

4. The Myth of the Strong Leader by Archie Brown ($27): “This year’s fierce election battle prompted me to pick up this 2014 book by an Oxford University scholar who has studied political leadership — good, bad and ugly — for more than 50 years,” Bill remarks. Crushing the falsehood of the outwardly strong leader, Brown determines that it’s people who collaborate and negotiate who we should actually be following.

5. Honorable Mention: The Grid by Gretchen Bakke ($21): While this book wasn’t quite on our to-read list before, Bill Gates has a convincing reason why it should be. “This book, about our aging electrical grid, fits in one of my favorite genres: ‘Books About Mundane Stuff That Are Actually Fascinating.’” Whether you’re looking to learn something new in 2017 or just sound super smart at this year’s office Christmas party, this book has definitely won a coveted spot on our Goodreads list.

Have you read any of the books on Bill Gates’ 2016 reading list? Tweet us by mentioning @BritandCo.

Ashley Macey
Ashley Macey is a lifestyle freelance writer who loves all things fitness, wellness, and creativity. When she's not exploring her home in the Pacific Northwest with her dog Max, you'll probably find her curled up with a good book and some hot tea. Follow her daily jaunts on Twitter.
Book Club
Home News
Book Club Books
More From Home News