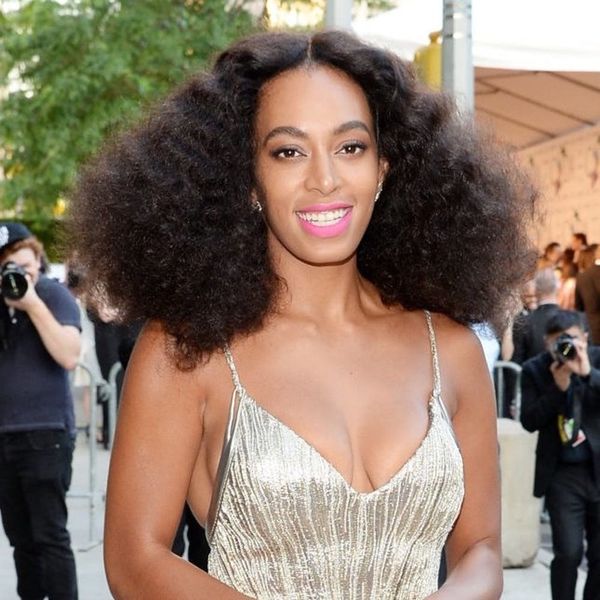 It’s no coincidence that the first African-American woman to become a millionaire, Madame C.J. Walker, made her fortune in haircare. I mean, black womanhood and hair are deeply intertwined. There are so many actresses, singers, models and rappers whose tresses are as groundbreaking as their talents. Whether we’re rocking natural hair, stunting in wigs or cutting it all off, we can’t help but set major trends that will have the world running to the salon. Here are 14 black women who will go down in history as true hair icons.

1. Rihanna: Bad Gal Riri is a hair chameleon. There isn’t a color, style, length or curl pattern that this good girl gone bad hasn’t tried — or that hasn’t been copied by the masses. We lost our minds when she shaved her head, sprinted to our stylists when she wore oxblood curls and did a double take when she went blonde. What will she do next? (Photo via Jason Merritt/Getty)

2. Diana Ross: Diana Ross has a big voice to go with even bigger hair. It’s almost as if the phrase “big hair don’t care” was created because of her. She’s inspired generations of women, including her own daughter Tracee Ellis Ross, to love their hair as big as it is. (Photo via Stringer/Getty)

3. Billie Holliday: The legendary Billie Holiday is unforgettable not only for her iconic voice, but also for her show-stopping style. Miss Lady Day upgraded the hair accessory game courtesy of her trademark flower and sleek low bun. Her presence can be seen all over our Instagram feeds, as a delicately tucked flower in the hair is now a natural hair rite of passage. (Photo via Hulton Archive/Getty)

4. Janelle Monae: When you think of Janelle Monae, two things come to mind: her black and white style palette and epic hair that seems to defy gravity. Her statement-making pompadour is only rivaled by the James Brown throwback dance moves that have become her signature. (Photo via Kevork Djansezian/Getty)

5. Solange Knowles: Solange Knowles has long graduated from just being Beyonce’s little sister, especially when it comes to her unmistakable style. The other Ms. Knowles has been showing the fashion set that natural hair looks are not only versatile, but also have a home on the red carpet. Bonus points awarded for her homage to Diana Ross. (Photo via Mike Coppola/Getty)

6. Naomi Campbell: Hair can make or break a model. Twiggy, Grace Coddington and Linda Evangelista know this all too well. And Miss Naomi Campbell? Her long, flowing hair is as iconic as that runway strut. (Photo via Gareth Cattermole/Getty)

7. Alicia Keys: Ms. Keys came onto the scene and set herself apart with expert songwriting, awe-inspiring piano skills and cover girl-worthy looks, but it was her hair that really caught people’s attention. Alicia’s braided hairstyles, including beaded ends, cornrows and high ponytails, were the perfect mix of vintage looks with fresh, contemporary vibes. (Photo via Vince Bucci/Getty)

8. Grace Jones: Grace Jones is fierce with a capital F thanks to her uncompromising take on pop music and fashion. Simply put, she’s a trailblazer who paved the road for artists like Lady Gaga and Rihanna. Grace lives outside the box, and it shows with her personal style — including her iconic high-top fade. Grace is the definition of slayage. (Photo via Francois Durand/Getty)

9. Lupita Nyong’o: Who can forget Lupita’s Cinderella moment at the 2014 Academy Awards? When the starlet wore a powder blue dress complete with crown and tightly coiled locks, she instantly took her place as a true tastemaker. Lupita came on the scene with her TWA (that’s teeny weeny afro) styled 100 ways, and we can’t wait to see what she rocks next. (Photo via Frederick M. Brown/Getty)

10. Cicely Tyson: Cicely Tyson is a hair daredevil. During her 91 years on Earth, she’s rocked everything from intricate braids, fully beaded hair, tightly styled curls and elaborate headwraps. And, while Billie Holiday may be known for her love of flora, it was Cicely who pushed it to the max with a full-blown bouquet. (Photo via Frederick M. Brown/Getty)

11. Shingai Shoniwa: The London songbird’s first name means “be bold, courageous or strong,” and that’s the perfect way to describe everything about Shingai Shoniwa’s look — including her hair. Whether it’s a kinky pompadour or this remix on Princess Leia’s double braided buns, Shingai isn’t afraid to take it there. (Photo via Anthony Harvey/Getty)

12. Halle Berry: Halle Berry’s pixie cut is the hairstyle that launched a thousand copycats. Women of all hair hues and textures turned to Halle’s short style as their ultimate inspo. Years later, the look is still iconic. (Photo via Frazer Harrison/Getty)

13. Nina Simone: Ms. Nina Simone was all about self-love, and she taught many black women to adore themselves through example. With a closely cropped ‘fro and a variety of hair accessories, Nina showed generations of women how to celebrate their natural look and bring out their rebel spirit. (Photo via Ian Showell/Getty)

14. Lil’ Kim: Kylie thinks she’s the queen of wigs, but Lil’ Kim is the real reigning monarch. The other Queen Bee is known for pushing the boundaries when it comes to her hair and fashion. From vibrant colors to close crops and in-your-face accessories, there’s nothing “lil'” about Kim’s impact on celebrity hair. (Photo via Brenda Chase/Getty)

Looking for more vintage hairspiration? Visit us on Pinterest!

Septembre Anderson
Septembre Anderson is a multimedia journalist, cultural critic and media commentator. Her published work covers topic areas like fashion, beauty, lifestyle, current events, social justice and health + wellness. While her passions are her profession, Septembre also enjoys losing herself in science fiction and fantasy novels and waiting patiently for the next A Song of Ice and Fire book.
Celebrity Hair
Hair
Celebrity Hair Hair Trends
More From Hair