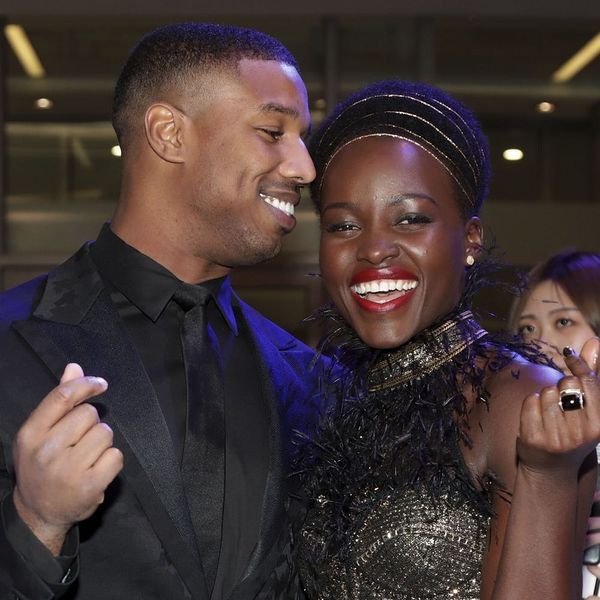 Black Panther has already brought us stunning red carpet fashion, stellar reviews, and a story that’s quickly becoming a cultural phenomenon. And now it has resulted in a truly amazing situation between two of the movie’s stars, Michael B. Jordan and Lupita Nyong’o.

While we don’t know many of the specifics, we do know that Jordan made — and lost — a bet with Nyong’o. However, we don’t have a heck of a lot of sympathy for him, considering his punishment (to the delight of fans everywhere) is that he has to drop and do push-ups whenever Nyong’o tells him to. (We’re pretty sure this is a dream most of us have had at one point or another!)

You can never really predict when it will happen. For instance, we’ve seen him do it during a live Twitter Q&A panel that took place on February 13.

We’ve also seen him get the order in the middle of a bustling (and highly stylish) crowd at a Calvin Klein show that took place just six days ago.

When the two met up at the show, he apparently thought they were about to share a photo op and could be seen leaning in to hear her over the crowd. But his face quickly changed when he realized what she was saying. “She’s brutal, she’s brutal. Never bet with her ever,” the actor advised anyone watching before he hit the floor and performed a perfect push-up in the tiny space between the benches.

On-call push-ups #3 in popcorn at the #CalvinKlein show @MichaelBJordan. 3 more to go...

At times, he has tried to use flattery to get out of the challenge. Yesterday, Nyong’o posted a video of them meeting up in what appears to be a dressing room. As she walked in, Jordan greeted her with a compliment, saying, “You look nice today. You look amazing.” He also gave her a tight hug, perhaps trying to delay the inevitable. He then attempted to get her out the door before she could issue the push-up order, but she couldn’t be dissuaded.

Instead she took his face in her hands and told him that she had time not just to talk to him, but also to see him get down and do a push-up. Which, of course, he did.

@michaelbjordan, losing with a smile. On call push-ups!!!

She also let him know that more push-ups are in his near future… and we can’t wait!

Have you ever lost a funny bet to a friend (or did they lose to you)? Tell us about it @BritandCo!

Desiree O
Desirée O is a ‘Professional Bohemian’ who loves anything and everything related to the arts, entertainment, and pop culture. She ADORES being a ‘Newsy’ for Brit + Co, covering all of the latest tidbits of awesomeness that you want to read about. When she’s not writing, she’s either making messy art, going on long adventurous walks with her camera, or poking around over at bohemianizm (http://www.bohemianizm.com/). You can find out about Desirée O and her work at http://DesireeO.com/ or follow her on Twitter @DesireeO.
Movies
Celebrity News
Movies