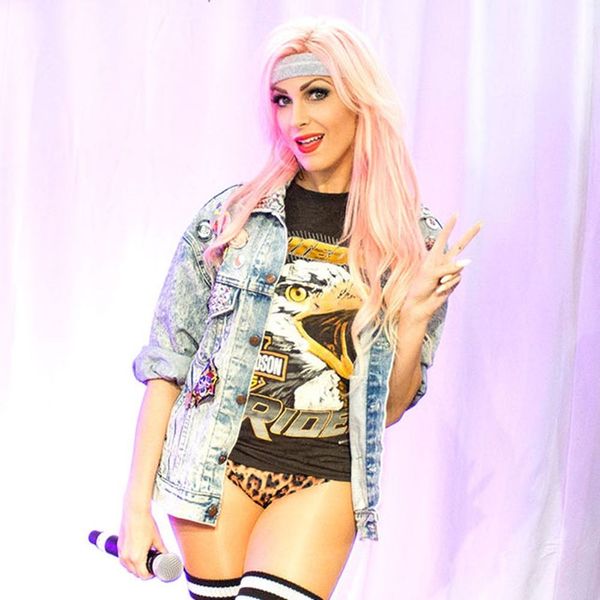 “In everyday life, I feel like the world is full of song titles,” Bonnie McKee said to kick off our interview. I caught up with the pink-haired siren moments before she took the Re:Make stage this past weekend and slayed an intimate medley of the most popular songs she’s ever written, smash hits like “Hold it Against Me” by Britney Spears, “Dynamite” by Tiao Cruz and basically everything by Katy Perry, from her breakout “California Gurls” to the party anthem “Last Friday Night (T.G.I.F.)” to the empowering “Roar.” Basically, you’re already a fangirl and you didn’t even know it.

Bonnie recently made the move to independent artist, now writing and performing jams of her own that position her as a badass belter somewhere between Katy and Ke$ha, who she’s also written for. After she sang her medley, her lyrical resume, it was evident that this girl has seriously creative chops and a distinct pop-songwriting point of view — cleverly descriptive, never too serious and able to channel nostalgic yet raw feels toward teenage subjects like getting into trouble, having fun and falling in and out of love. But once she performed her *own* songs from her EP Bombastic — a show complete with two leggy backup dancers, a way cool DIY jean jacket and glitter bombs — it was obvious that she wields a mic as well as she does a pen. In other words: she belongs on the stage, too.

Since all earworms start out as scribbled wordplay, we thought we’d give Bonnie a songwriting challenge in an attempt to experience the process behind what catapulted her into the pop world in the first place: penning mega hits. So, we asked her to come up with song titles for random and, admittedly, totally ridiculous premises completely on the fly. Not only did she rise to the occasion and nail it like a boss, but she may have just turned her love of spaghetti into the next song of the summer. See what we mean when you read the full interview below.

B+C: Where do you get songwriting inspo?

BM: “Everywhere. Obviously from my own love life, and being in this crazy industry has written a lot of those songs for me. Even just film and TV — I’m really visually inspired, so if I run out of stuff, I’ll even go on Pinterest or something and just look at pretty pictures. I’ll have a theme and I’ll go through and look at different pictures that describe what I’m looking at and that will sometimes spiral a story.”

It really is all about storytelling.

“For me, it is. Although in pop music, melody is king, so I have to be really mindful of that as well. That’s something I’ve gotten better at throughout my career, working with people like Max Martin and Dr. Luke who are like melodic geniuses, so I’ve really honed that craft as well. There’s definitely a science to it.”

Your songs are so descriptive and clever — a ton of Katy Perry lyrics — super cheeky but smart. What’s your advice to someone who wants to try to be a next-level descriptive writer?

“I try to cut down on filler as much as possible; I try to make every word count. When I’m writing a melody, I don’t want to have a line in there that doesn’t have a visual or that doesn’t have an emotional punch. In pop music, there’s a lot of fluff and sometimes it’s fine, but I like for it to always have heart behind it, even if it is filler. Even if it’s like, “Ooh baby, I love you,” it needs to be set up by something that makes it hit a little harder.”

What makes a great pop song to you?

“When your two-year-old niece can get down to it and your grandma can sing along to. Pop music specifically is universal, so it can be broad enough so everyone can relate, but then specific enough so it’s still memorable.”

What was the first pop song you heard where you were like “I need to get into pop music, this is rad”?

“Madonna’s ‘Express Yourself.’” One of my earliest memories is I remember watching MTV and seeing the ‘Express Yourself’ video and wanting to be that — I want to be crawling on the floor like a cat lapping up milk with lightning and the whole thing. Madonna was a huge inspiration for me as a kid. It was also really heavily tied into the visuals of all that too.”

If you could pick three songs to never ever get out of your head, what would they be?

“When Doves Cry” by Prince, “Call Me Maybe” by Carly Rae Jepsen and “Bohemian Rhapsody” by Queen.

Okay, I wrote down some everyday situations that I hope can inspire some good song titles that you can come up with on the fly. The first is: being catfished by a Tinder date.

“The song would be, ‘Who Are You, Really?.’ I think it would start with the story of the promise that you were given — all the things you had in common, the connection that you felt like you had with someone and then you show up and it’s all a lie. ‘Who are you, really?’”

A song title for when you show up to a party in the same outfit as your frenemy?

“‘Frenemy’ — that was another song title I used actually, Katy Perry and I had talked about writing a song together called ‘Frenemy’. I guess I would call it, ‘Oh No You Did-n’t.’ I would be like, ‘B*tch you wanna battle?!’ Battle royale. Maybe somebody saw you on Instagram getting ready ‘cause you posted a pic of your outfit. You know that b*tch is watching you and then you show up and you’re like ‘No, nooo!’, then you’re like, who wore it better — ‘Who Wore It Better’ is a good title too.”

A song title to describe one’s love affair with pizza.

“It’d be something about gettin’ oiled up, because that’s what I think of when I think of pizza — that wonderful sweet oil that comes off the top. I think about the oil, that’s the thing that stands out to me.

[Laughs]. “Truth be told, I kind of hate pizza, and all my friends are like, ‘WTF is wrong with you!’ but I’m the weirdo who hates pizza. Truthfully, ‘Overrated’ would be my pizza song. I really like spaghetti, so my ode to spaghetti would be ‘Feels Like Home.’ My mom is famous for her spaghetti, so every holiday, she would make us spaghetti and all my friends would be so excited to get the leftovers because it’s better the next day. I might tell that story and start from the beginning. It would be like a little ‘I love my mom’ song too — there would be a little mom love in there.’

A song title for unleashing your inner #Girlboss.

“‘Who’s the Boss?’ I like question titles. It would prob be like maybe a man — it doesn’t even have to be a guy, someone, society, whoever — trying to tell you you can’t do something. And you standing up and being like, ‘Who’s the boss now?’

It really seems like there’s a story behind every song. Even if the lyrics to some pop songs seem a little repetitive — it’s like there’s intention behind them.

“Yeah, there should be. Sometimes I hear a song and I’m like, wow, you really just phoned it in. It’s just like paint by numbers, you know. I really like my music to have a little heart.”

What songs do you listen to feel more creative? Name drop your most inspiring songs in the comments below.