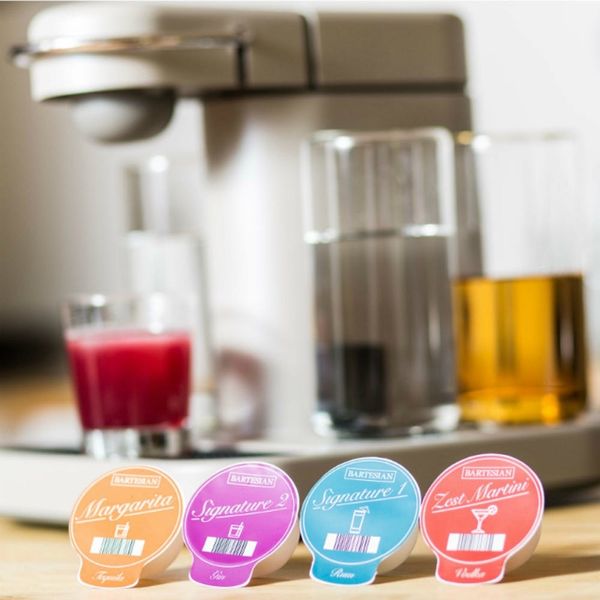 From Keurigs that make cocktails to home brew beer machines to WiFi-connected cocktail makers, a slew of booze machines have been hitting the home market… some still in crowdfunding mode. If the smartest bar tool you’ve got going in your kitchen is that wine-mulling slow cooker, it’s time to dream bigger. Some of these newest machines are Jetsons-level tech gizmos that do all the work for you. And that would be an awesome thing, because it would free up your time to source cocktail recipes and fun bar accessories. Here are nine smart home booze machines that are destined to up everyone’s party-host game.

1. 10 Vins D-Vine ($950): Imagine a world where you walk to the kitchen on a Netflix break and choose a single serving of your fave wine — perfectly chilled — with the touch of a finger. That world is now, baby! D-Vine aerates and brings your fave wine to its ideal serving temp in less than one minute.

2. Bartesian ($300): Store up to four different liquors in this machine’s reservoirs. When you have a hankering for a mixed drink, pop in one of six different flavor pods, adjust the liquor strength setting and press start.

Presto! In under four hours you’ll have a batch of beer that’s ready for yeast and fermentation.

boozier. And the coolest thing about WineStation is that it keeps the *open* bottles fresh for up to 60 days, so you’ll never dump another half bottle of wine.

5. PicoBrew ($800): Home brewing just got super-simple. Fill a keg with water, load in the pre-proportioned PicoPaks of grains and hops, then hit the brew button. You’ll be served up with a beer batch that’s ready for its pre-proportioned yeast pack and fermentation. Transfer your finished batch to a five liter keg, where it gets carbonated and ready to tap.

6. Kickstarter Somabar ($430): This WiFi-connected cocktail machine is like a boozy Keurig sitting on your kitchen island. Just download the Somabar app, fill the side containers with your favorite alcohol and mixers, then use your phone to place drink orders.

7. Krups + Heineken The Sub ($220): Nothing kills a party like warm beer, so Krups & Heineken have teamed up to rescue beer bashes everywhere. The Sub functions as a combo refrigerator and beer tap, “super chilling” beer to a frosty 35 degrees Fahrenheit, compared to 42 degrees Fahrenheit in a standard fridge. The machine hit France and Italy in 2014, then rolled out to the Netherlands and UK, where it’s available for purchase now at Heineken international sites for €199.

8. Jevo ($N/A): The Jevo jello shot machine can produce 20 ready-to-glug shots in just three steps: Select your liquor of choice, pop in your fave of nine flavor pods and hit “go.” This machine is in beta, with no word yet on the price. A few hundred machines went out to testers at the end of the year, with 5,000 more to hit bars and restaurants this year before it’s opened up to home buyers — but you can reserve one now at the Jevo site.

9. SodaStream Bear Bar ($N/A): The makers of SodaStream want to make pouring a beer in your kitchen as easy as pouring a soda. Their proprietary beer concentrate and sparkling water machine makes a tasty blonde ale at the push of a button. Currently available in Germany and Switzerland, Beer Bar is expected to roll out to other countries this year.

Sally Jones
Sally Jones is a writer and editor living in New York City. She has worked at many websites including iVillage, Ladies Home Journal, More, Parenting, Cosmopolitan, The Knot and YourTango, in jobs ranging from editor to COO. Renovation and interior design are her unhealthy obsessions hobbies. She has renovated every home she's lived in, including the rentals, and like... whoa, who does that? You can catch her at her blog Renov8or.
Cocktails
The Conversation
More From Cocktails