Cards Against Humanity Reveals a Pink “For Her” Edition 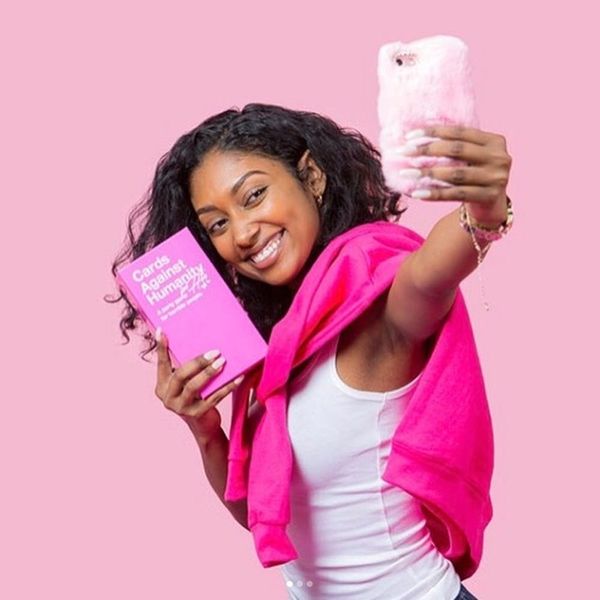 Playtime may have evolved since we were kids, being much more tech-centered nowadays, but if you still enjoy playing games with your besties, you’ll surely have taken on a round or two of Cards Against Humanity. However, if you’ve ever felt like you couldn’t connect to the black version of the cards, then fear not! The game-makers have come to the rescue with a millennial pink version deemed Cards Against Humanity for Her, “Designed for women.” But beware: It will cost you $5 more than the regular ol’ version. And for a very good reason.

A parody of sorts designed in response to the “pink tax” (the added cost added to women’s products despite there being no actual added value), it’s pretty darn stellar when you get down to the motivation behind its conception.

It’s kicking up controversy with folks who don’t realize it’s a farcical (yet totally on-point) take on the ridiculousness women face while shopping, but as the game’s director, Jenn Bane, told Business Insider, “We decided that hey, it’s 2017, it’s time for women to have a spot at the table, and nevertheless, she persisted. That’s why we made Cards Against Humanity: For Her. It’s trendy, stylish, and easy to understand. And it’s pink.”

🎀👋 Say hi to our new edition...Cards Against Humanity for Her. It's exactly the same as the original game, but it's pink and it costs more. All profits are donated to Emily's List. So random. 💅CardsAgainstHumanityForHer.com

While the pink pack is all in good culture-poking fun, you can actually purchase the “For Her” version as well as the Period Pack, the Weed Pack, and the ‘90s Nostalgia Pack, along with plenty of other versions that will have you raising your eyebrows (and perhaps hitting the “buy now” button).

What do you think about Cards Against Humanity for Her? Let us know @BritandCo!

Desiree O
Desirée O is a ‘Professional Bohemian’ who loves anything and everything related to the arts, entertainment, and pop culture. She ADORES being a ‘Newsy’ for Brit + Co, covering all of the latest tidbits of awesomeness that you want to read about. When she’s not writing, she’s either making messy art, going on long adventurous walks with her camera, or poking around over at bohemianizm (http://www.bohemianizm.com/). You can find out about Desirée O and her work at http://DesireeO.com/ or follow her on Twitter @DesireeO.
Games
Pop Culture
Games
More From Pop Culture