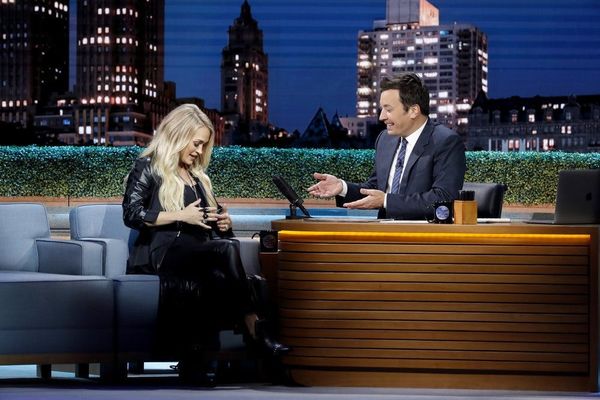 Carrie Underwood is expecting baby number two with husband Mike Fisher, so her 3-year-old son is getting ready to be a big brother. The singer has said she doesn’t yet know the sex of her second child, but Isaiah has some ideas for what they should name the new addition anyway.

“We did ask him, and he did say, ‘Isaiah Michael Fisher,’ which is, of course, his name and would be confusing,” Underwood joked to Jimmy Fallon on the Tonight Show on Thursday, September 13. “He wants to name everything his name because he thinks that’s special.”

Asked if little Isaiah is fully aware of what it means to welcome a little sibling into the world, Underwood admitted, “I don’t think for real he does. He’ll be really sweet and talk to my belly and kiss my belly. He’s the sweetest little boy. I mean, no kid can really know that their life is going to change. He’ll just have to share mommy.”

Underwood first revealed that she was pregnant with baby number two in August. The country superstar, whose latest album Cry Pretty was just released, addressed fans in an Instagram video to make the announcement. “You might be wondering, or asking, ‘Carrie, why is your tour starting in May?'” she said, right before the camera panned out to reveal four foil letter balloons spelling out “BABY.”

“Mike, Isaiah, and I are absolutely over the moon and excited to be adding another fish to our pond,” she continued. “We’re just so excited and glad you guys can share this with us and be a part of it. Love you guys!”

Underwood recently had to cancel shows in the UK due to illness, which, as she told Fallon, was a viral infection resulting in vertigo and a three-day hospital stay in Germany.

What do you think of Carrie’s son’s name suggestion? Let us know @BritandCo!