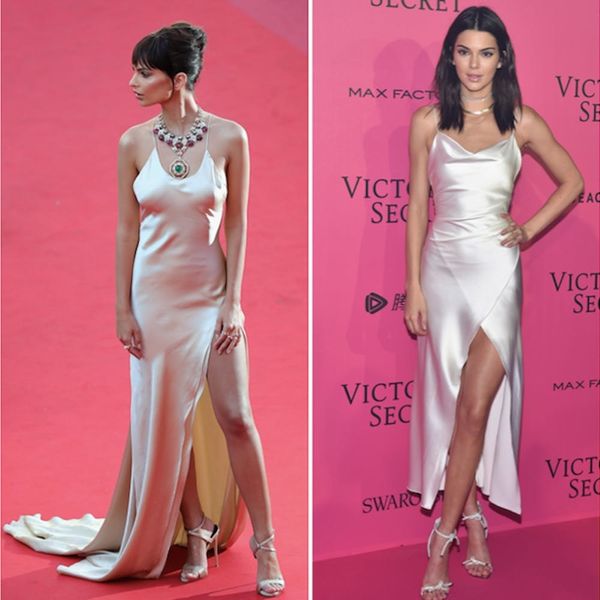 They say imitation is the sincerest form of flattery (the #outfitinspo hashtag exists for a reason!). So when a celeb turns up in a look we’ve seen before, we have to wonder: Was it planned or not? Sometimes it’s a happy accident (AKA: stylists with similar taste), sometimes it’s a clear homage to a great look. Either way, twinning moments happen to everyone, even celebrities. Below, we’re celebrating a few of our favorite celeb style doppelgangers.

J.Lo never met a see-through dress she didn’t like. And can you blame her? She flaunted what she’s got at The Late Show in this Meshki stunner.

Speaking of flaunting, Ariel Winter is on the same page as J.Lo — and in the same dress for her Jimmy Kimmel appearance. Werk.

Jenner rocked a silky slip dress with a thigh-high slit for the afterparty following the Victoria’s Secret Fashion Show in 2016. Barely there shoes completed the look. (Photo via Pascal Le Segretain/Getty)

Cut to the 2017 Cannes Film Festival this past week, where Ratajkowski used the no-fail formula. Slip with slit + strappy heels = HAWT. (Photo via Neilson Barnard/Getty)

The queen of early aughts hotness (peep the butterfly clip), Hilton rang in her 21st birthday in a sparkly, almost-naked-but-not-quite mini dress, complete with major choker action. She never was one for the understated thing.

Jenner paid tribute to the heiress who paved the way by recreating the look for her own 21st. Because it’s important to honor those It-girls who came before us.

Dior is currently on many a celeb fave list. Agron chose this see-through sporty dress for an event with the label.

Model Donaldson opted for the white version of the frock for her Cannes Film Festival appearance. We’re getting black swan/white swan vibes here — anyone else? (Photo via Andreas Rentz/Getty)

Norma Kamali is the It-girl swim brand of choice these days, it appears. Culpo clearly got the memo and slayed in this red two-piece version of the ubiquitous studded swimsuit.

Mitchell went for the pink version of the bikini (minus the top), presumably because it matched her pool float. We respect her dedication to color coordination.