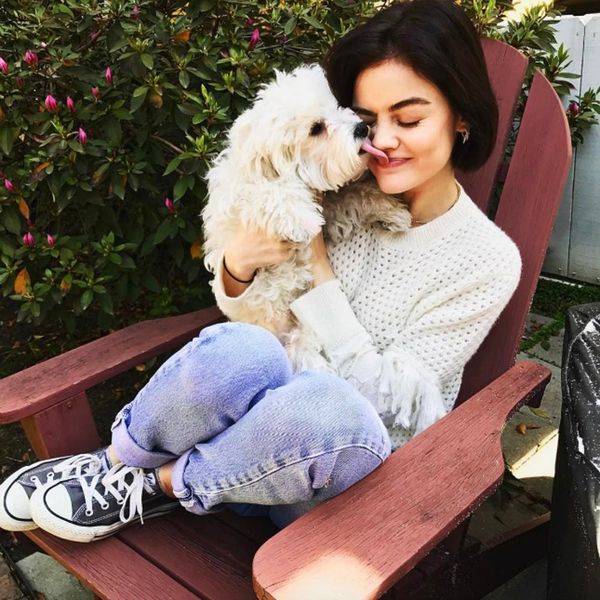 There’s only one thing in the world that can completely turn around a terrible day: scrolling through pictures of cute dogs on Instagram (no shade, cat ladies). Yes, while other folks might prefer taking their daily self-care break by browsing hot beauty trends or adorable marriage proposals on their phones, we’re always partial to searching for the cutest #instadog. Luckily, some of our favorite girlboss celebrities are just as obsessed with dogs as we are. To celebrate National Pet Day today (and every day), here are 11 badass female celebrities whose pups have a starring role in their Instagram accounts.

1. Kaley Cuoco: This Big Bang Theory star definitely believes that her rescue Ruby is the star in every picture. Not only is this little fuzz-ball one of the most popular guests on her Instagram, but her other pup Norman is actually the namesake of her Insta account.

Who's the rescue? 😂 #AdoptDontShop #FunTimesWithFriends

2. Hilary Swank: This leading lady also has two dogs of her own: A golden retriever mix Rumi and a beagle-terrier cross named Kai. After rescuing her late dog Roo on a movie set in South Africa, she even decided to start her own dog-friendly foundation named Hilaroo (AKA the cutest celebrity relationship name E-V-E-R).

3. Zooey Deschanel: When Deschanel went into a dog shelter on her birthday, she immediately felt drawn to a cutie named Dot. And when the shelter informed her that Dot had a sister named Zelda, she came home with two inseparable ladies for the price of one. We’re not crying, you are.

4. Kristen Bell: Kristen Bell and hubby Dax Shepard have a dog named Lola who’s pretty much just one of the gang. “I have treated all my dogs like my kids,” she said in an email interview with People. “To me, they’re just like kids I didn’t birth.”

5. Miranda Lambert: This country star has an entire pack of pups on her hands! “I’m just like my parents, who always had an open door policy; I feel the same way about dogs and animals,” she tells Modern Dog Magazine. “If any animal needs a place, [they] can stay here.” Heck, this gifted lady loves her dogs so much that she even created her own line of pet products called MuttNation.

Six days until LA's #strutyourmutt event at the LA Coliseum Exposition Park. Walk with @finnsite and me to raise awareness for the 9,000 dogs and cats killed every day in shelters across the US. See you there!

6. Amanda Seyfried: Seyfried’s beautiful rescue pooch Finn (who, yes, has his own Instagram) is absolutely stunning, just like his mom. She recently teamed up with Best Friend Animal Society to help inspire people to participate in the fundraising dog walk Strut Your Mutt.

7. Chrissy Teigen: Although we love seeing pictures of little Luna, we definitely miss the days when Chrissy’s Instagram feed went to the dogs. Chrissy and John’s sweet bulldogs Pippa, Puddy, Penny, and Puey are definitely a leading part of this high-energy family (they are the stars of both their Instagrams, Teigen’s cookbook, and even have a feature role in Luna’s nursery).

8. Reese Witherspoon: You know you’re a proud pup momma when you have a dedicated hashtag just for capturing your dog’s life. Follow along with Witherspoon’s adorable Frenchie Pepper with #PepperPortraits.

Welcome to the family Chloe 💋! @westsidegermanshepherdrescue

10. Ariana Grande: While Grande may be known for her bunny ears, she’s definitely all about that dog life. Currently the pop star has nine dogs (Cinnamon, Coco, Fawkes, Lafayette, Ophelia, Sirius, Toulouse, Strauss, and her newest addition Pignoli). But we wouldn’t be surprised if she makes it double digits soon…

11. Lucy Hale: Lucy Hale is an unapologetic dog lady and we love it. “I know I post a lot about my dog, but he’s literally my life,” Hale captioned one of her Instagram pics of Elvis. Don’t worry, Lucy, we *totally* understand.

Have you ever followed a celebrity’s Instagram just to see pictures of their dogs? Tweet us by mentioning @BritandCo.

Ashley Macey
Ashley Macey is a lifestyle freelance writer who loves all things fitness, wellness, and creativity. When she's not exploring her home in the Pacific Northwest with her dog Max, you'll probably find her curled up with a good book and some hot tea. Follow her daily jaunts on Twitter.
Dogs
Home News
Dogs