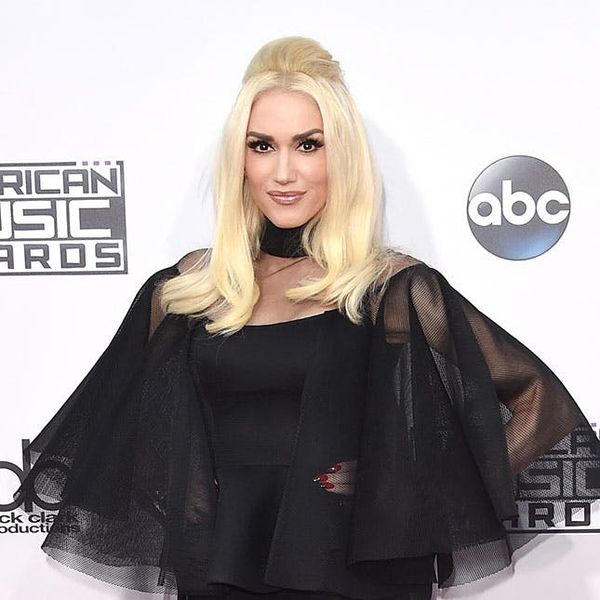 There’s something about cold weather that makes us gravitate toward dark colors. Whether we’re swiping on a super vampy lipstick or throwing on layer after layer of inky outerwear to keep warm, dark colors seem to go hand in hand with this time of year. The same goes for celebrities, who’ve been proving this cold-weather-fashion theory is true with the latest red carpet dress trends: Black dresses with *sheer details.*

Gwen’s long black dress at the American Music Awards featured a sheer neckline and sleeves that showed off serious ruffles — but that’s not all. From the waist down, her dress revealed that she was wearing a leotard-like piece underneath, aka the garment of choice to wear with a sheer skirt. While it looks like Gwen is bare-legged under her flowy skirt, you could pull off this look with opaque tights underneath. We’d wear ones with major patterns or embellishments since they’re peeping from hip to toe. (Photo via Jason Merritt/Getty)

Cate looked seriously stunning in this intricately-detailed, long-sleeved dress at the Museum of Modern Art’s 8th Annual Film Benefit. The tiny beads on the sheer part of her dress and thick stitching added a touch of minimalist bling — an amazing detail for the gal who wants her glitz to shimmer, but not SPARKLE — while the ruffles on her chest and midsection keep the dress super feminine. (Photo via Neilson Barnard/Getty)

J.Law showed up to The Hunger Games: Mockingjay Part 2 wearing a sheer black dress that gave off major nightgown vibes. She sported a black, lacy bralette underneath a sheer, long-sleeved top (think of it like a next-level crop top) and balanced out the look with a long, matte skirt. It was such a striking look — especially with that vampy lip! (Photo via Michael Loccisano/Getty)

Sheer, lacy and slightly undone describe Rooney Mara’s killer get up — PonyBun included — at the Museum of Modern Art’s 8th Annual Film Benefit. Her lacy look proved that you can totally break the rules you think you have to follow when it comes to looking fancy, like throwing on a strapless leotard underneath an intricate lace sheath. Mimic the undone trim hanging over her shoulders by tossing on a slinky scarf over your party gear. (Photo via Neilson Barnard/Getty)

Are you a fan of the sheer black dress? Share your thoughts in the comments below.

Beth Wischnia
You can typically find this Texan writing, trying on a new lipstick, gabbing with her identical twin sister or volunteering at the local animal shelter. She finds inspiration from rosé, beauty products, Tex-Mex and cats.
Celebrity Style
Fashion
Celebrity Style