Must-See Celeb Instagrams You Missed from the Met Gala 2017 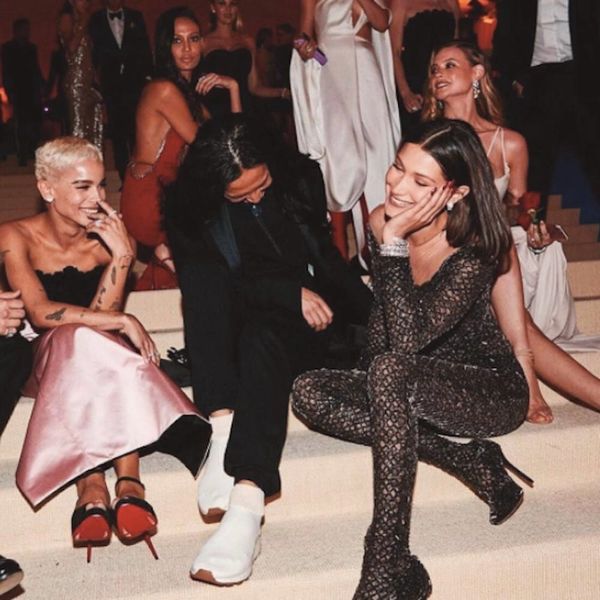 By now you’ve seen all the best red carpet style and beauty pictures from the 2017 Met Gala, from Claire Danes’ controversial Monse ensemble to the bobs Lily Collins and co. wore in honor of Comme des Garçons founder Rei Kawakubo. What you may NOT have seen, however, is all the candid shots celebs posted despite the strict no photo rule. Check out all the behind-the-scenes action you missed out on below!

1. Nicki Minaj: She did the impossible and got the notoriously selfie-shy Olsen twins to take a group shot with her. “OMG, I’m gagging,” the singer said with a heart eye emoji.

2. Sofia Richie: Nic Richie’s little sis revealed that she narrowly avoided a wardrobe malfunction at the Met Gala, gazing up at model Jordan Barrétt, with the caption, “The moment @iblamejordan saved me from my nip slip.”

3. Kendall Jenner: Bella Hadid crouched down for a shot with Jenner, which Jenner posted to her page, calling Hadid, “My baby girl.”

4. Katy Perry: As Met Gala co-chair, Perry was serving up sass in her Maison Margiela by John Galliano masterpiece for Vogue’s Instagram video booth, giving us a better look at that INSANE headpiece and eye makeup.

@madonna I ❤️you. No other caption needed

5. Sarah Paulson:The People v OJ Simpson: American Crime Story star geeked out over seeing Madonna on the red carpet, pointing from behind with her mouth agape. “@madonna I love you. No caption needed,” she confessed.

6. Gisele Bündchen: There were plenty of uber-adorable shots of the Met Gala co-chairs cozying up to one another on the red carpet, but our favorite just might have been the one they snapped prior to the festivities, with Bündchen sidling up to her man for a kiss in her bathrobe.

7. Lupita Nyong’O: It was all about the fashion for Nyong’O, who gave us a glimpse of her ensemble accessories — a peach Prada bag and plenty of Tiffany & Co. jewels. “Last night was flowery!” she said.

Floating in a @GiambattistaValliParis sea of roses at @MetMuseum to celebrate Rei Kawakubo / Comme des Garçon....

8. Lily Collins: One of the nights biggest style winners posed in a “sea of roses” for this visually stunning red carpet shot in her show-stopping Giambatista Valli gown.

9. Gigi Hadid: Prepping in her nude Alana O’Herlihy dress, Hadid brought out the rainbows with her Heavenly look.

10. Bella Hadid: Meanwhile, Hadid’s younger sis shared a laugh with singer Zoe Kravitz, who “[made her] blush because she is just as perfect in real life as she is in this picture.”

Step two...give em a nasty over the shoulder shot while you try to figure out how to get in the car...

11. Zendaya: Zendaya let us in on some of the perils of being swathed in a massive (and gorgeous) Dolce & Gabbana gown, writing, “Step two…give ‘em a nasty over the shoulder shot while you figure out how to get in the car,” she wrote.

I needed to go the bathroom and ended up famous.

12. Brie Larson: Larson reposted that famous bathroom selfie by Kylie Jenner with the tongue-in-cheek caption, “I needed to go the bathroom and ended up famous.”

13. Jessica Chastain: Chastain, Sarah Paulson, and Lupita Nyong’O appeared to have a Cinderella moment on the stairs for their very own dance party, which Chastain dubbed the best part of the whole Gala.

14. Zoe Kravitz: “When Reese Witherspoon shows up to the party everyone’s like, J,” Kravitz wrote of her Big Little Lies costar with a bunch of smiley faces.

15. Paris Jackson: Jackson danced (barefoot?) like no one was watching in one of the museum’s darkened rooms.

16. Chrissy Teigen: Teigen made us LOL with her Met Gala prep shot, saying, “Readddddy,” on a shot of her and husband John Legend still in bed.

Not the world's greatest photo but geez, the highlight of my evening was hanging with these ladies. Listen- these big events are an anxiety fest for some of us. I was flying solo and knew not a soul but they kindly took me under their wing. What a pair of inspiring, grounded, kind women they both are. I felt lucky to be in their company. 💗

17. Mandy Moore: “Not the world’s greatest photo but geez, the highlight of my evening was hanging with these ladies,” the This Is Us star captioned a pic of herself with Elizabeth Banks and Kerry Washington. “Listen — these big events are an anxiety fest for some of us. I was flying solo and knew not a soul, but they kindly took me under their wing. What a pair of inspiring, grounded, kind women they both are. I felt lucky to be in their company.” Awwww, how sweet!

18. Cara Delevingne: Delevingne showed off the aftermath of the evening, which appeared to include a lipsticked-smooch on the side of her newly shaven head.

Sometimes you just have to let your friends rest on your boobies! 🤡🤡🤡

19. Madonna: The Material Girl gave gal pal Amy Schumer a place to rest her weary head, saying, “Sometimes, you just have to let your friends rest on your boobies!”

With the baddest 🔥💋 Rih's the definition of the Met! @badgalriri @olivier_rousteing

20. Kim Kardashian-West: The reality starlet paid homage to Met Gala queen Rihanna, saying, “With the baddest! Rih’s the definition of the Met!”

21. Lena Dunham: The Girls star had to cut the festivities short Monday night, being rushed to the hospital over complications from her endometriosis (she was thankfully discharged soon after), but before she went, she gave us a laugh as she peered over Joe Jonas (who could have been her date in a nearly matching hue)’s shoulder, saying, “Fatal attraction.”

22. Celine Dion: The legendary songstress made sure her first Met Gala ever was a memorable one, getting silly in the Instagram video booth while showing off her leather Atelier Versace gown and a origami-inspired headpiece.

23. Vogue: Kardashian-Jenner sisters Kim, Kendall, and Kylie appeared to have their own video shoot in the Instagram video booth, with a special appearance by Kendall’s rumored beau, A$AP Rocky.

24. Behati Prinsloo: New mommies and BFFs Prinsloo and Candice Swanepoel reunited on the Met Gala carpet with no caption necessary.

Me and my macho bello...#MetGala2017 #Valentino

25. Jennifer Lopez: Not only did Lopez and Alex Rodriguez make their red carpet debut together at Monday night’s Met Gala, but she put her affection into words in her caption to the sweet selfie of the two en route to the event. “Me and my macho bello, she wrote,” more or less translating to “My beautiful man.”

Which celeb Insta was your fave? Tell us over @BritandCo.

Nicole Briese
Nicole is the weekend editor for Brit + Co who loves bringing you all the latest buzz. When she's not busy typing away into the wee hours, you can usually find her canoodling with her fur babies, rooting around in a bookstore, or rocking out at a concert of some sort (Guns N' Roses forever!). Check out all her latest musings and past work at nicolebjean.com.
Met Gala
Celeb Style
Met Gala
More From Celeb Style