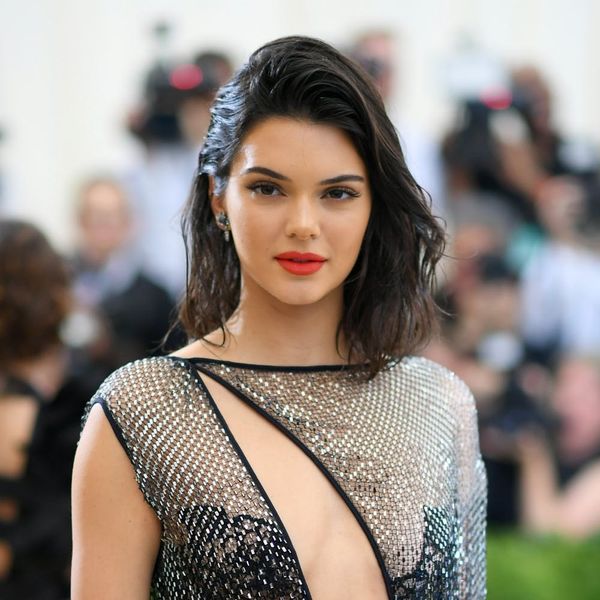 Kendall Jenner may have an unexpected reason for not talking about her love life, but that hasn’t stopped speculation from swirling around her and A$AP Rocky. And while she might be keeping it tight-lipped, a pic is worth a thousand words — and there is more than just one pic going around of this duo together at last night’s Met Gala. That’s why fans think that Kendall Jenner and A$AP Rocky may finally be going public with their relationship.

For months now, the 21-year-old model has been spotted out and about with the 28-year-old rapper, and the two look pretty cozy — but nothing has been confirmed about the status of their relationship. That is, until this year’s Met Gala. While Kendall Jenner stunned fans and walked the carpet in a barely there gown, A$AP Rocky was spotted by her side.

When the party moved indoors, big sis Kim Kardashian shared a Snapchat of Kylie crouched down taking a pic of Kendall and (yep, that’s right) A$AP Rocky. And proving that they only had eyes for each other at the annual event, the two even cozied up cheek-to-cheek for the rule-breaking group selfie filled with celebs.

But that’s not it! They were also spotted leaving Rihanna’s Met Gala after-party at New York’s 1OAK together, sparking even more speculation that things are heating up (and going public) between these two.

What do you think about Kendall Jenner and A$AP Rocky as a couple? Let us know @BritandCo!

Desiree O
Desirée O is a ‘Professional Bohemian’ who loves anything and everything related to the arts, entertainment, and pop culture. She ADORES being a ‘Newsy’ for Brit + Co, covering all of the latest tidbits of awesomeness that you want to read about. When she’s not writing, she’s either making messy art, going on long adventurous walks with her camera, or poking around over at bohemianizm (http://www.bohemianizm.com/). You can find out about Desirée O and her work at http://DesireeO.com/ or follow her on Twitter @DesireeO.
Kardashians
Celebrity News
Kardashians Kendall Jenner Met Gala
More From Celebrity News