See What All Your Fave Celebs Wore to Coachella 2018 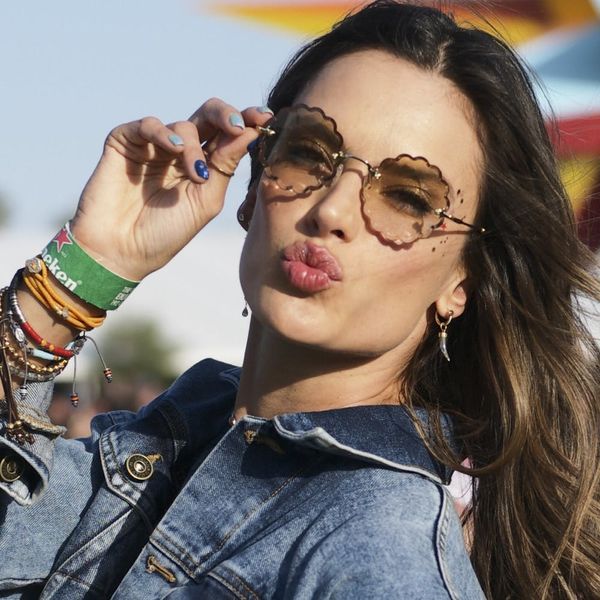 Festival season has officially begun! Coachella 2018 kicked off yesterday in all its desert glory, and stars wasted no time in trotting out their fiercest festival wares. After just one day, we’ve seen everything from hot pink wigs (we see you, Kylie Jenner!) and bold white eyeliner to yes, even black chaps, giving us an inkling that this year’s festival? Just might be the wildest display of style yet. Read on to find out who had our jaws dropped below, then stream all the best acts from the comfort of your couch — it’s a win win!

I’m not a regular mom I’m a cool mom

1. Kylie Jenner: Jenner kept up her tradition of wearing boldly-hued hair at the festival with a hot pink mane that spoke to her mindset. ”I’m not a regular mom, I’m a cool mom,” the 20-year-old wrote.

3. Paris Hilton: Hilton surrounded herself with some fashionable pals in The City‘s Whitney Port and stylist Rachel Zoe. (Photo via Stefanie Keenan/Getty)

4. Paris Jackson: Jackson braved the high winds in a Dior bra and matching sheer skirt, adding a poncho to her look for warmth. She also amped her beauty game up with a bold white cat-eye.

5. Vanessa Hudgens: The queen of Coachella celebrated the launch of her own 12-piece Festival nail polish collection for SinfulColors at the Dream Hotel in Hollywood.

6. Demi Lovato: Lovato enjoyed some fun in the sun as she hung poolside ahead of the fest.

My annual reminder to be Free & Live my best life. #coachella 🎡

8. Christina Milian: The singer soaked in her surroundings, writing, “My annual reminder to be free and live my best life.”

9. Carly Rae Jepsen: Where Rihanna went for a ‘60s vibe, Jepsen took it back to the ‘70s, sporting a short curly coif, a printed jumpsuit, and gold lame flats.

11. Rita Ora: Ora was ready to hit the stage in chaps, black bottoms, a bralette, and a matching blazer. Yowza !

12. Olivia Culpo: Culpo soaked up the sun at an event for Nine West.

13. Nicki Minaj: Yes, that is indeed Shania Twain partying it up alongside The Weeknd and Nicki Minaj in some tribal facewear and a cheetah-print jumper.

14. Taylor Hill: The VS model added a little KiraKira to her day two *lewk.*

15. Emily Ratajkowski and Kendall Jenner: Fashion queens Ratajkowski and Jenner made their mark at Coachella’s REVOLVE festival, with the former in a white linen button-dress and Jenner in an asymmetrical bra top and green parachute pants. (Photo via Roger Kisby/Getty)

Find your own version of a turn up @revolve 🌵🌞👯

17. Shay Mitchell: Mitchell could’ve been Jenner’s twin in green khaki parachute pants, though she swapped the black bra top for a white one — all the better to match her low-top sneakers. (Photo via Roger Kisby/Getty)

19. Jamie Chung: Chung did her best to “beat the heat” in a straw hot and a striped jumpsuit with colorful accents. (Photo via Philip Faraone/Getty)

20. Bella Hadid: Hadid was all smiles while rocking out to HAIM in a logo Chanel muscle tank.

21. Beyoncé: Queen Bee hit the stage in a pair of cutoffs, a yellow crop jersey, and a coordinating orange bodysuit. (Photo via Kevin Winter/Getty)

22.Cindy Crawford and Kaia Gerber: The model fam posed for a pic in matching banded hats and printed tops.

Where did this fishnet stockings with a thong trend come from? Did I totally miss the mark?

23. Whitney Port: Port questioned her own ruffled Marc Jacobs two-piece, writing, “Where did this fishnet stockings with a thong trend come from? Did I totally miss the mark?”

Tag us in your best Coachella pics over @britandco.

Nicole Briese
Nicole is the weekend editor for Brit + Co who loves bringing you all the latest buzz. When she's not busy typing away into the wee hours, you can usually find her canoodling with her fur babies, rooting around in a bookstore, or rocking out at a concert of some sort (Guns N' Roses forever!). Check out all her latest musings and past work at nicolebjean.com.
Celebrities
Celeb Style
Celebrities Celebrity Style Coachella Festival Style Music
More From Celeb Style