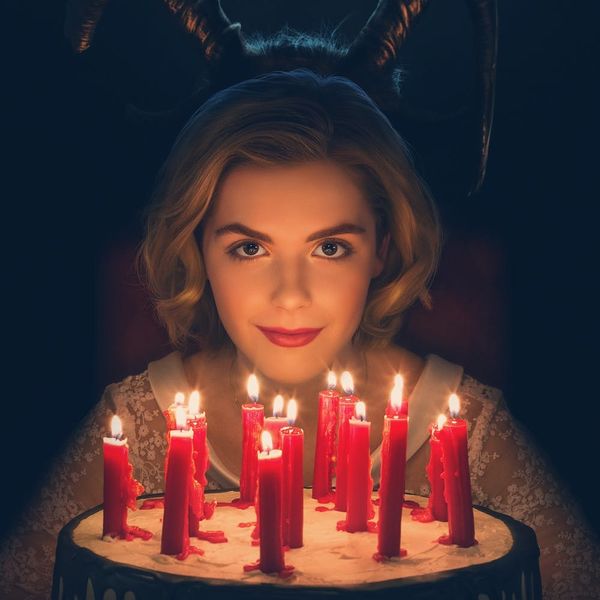 If you weren’t already in the mood for Halloween, the first full trailer for Netflix’s Chilling Adventures of Sabrina will definitely get you there. The series has been described as “tonally in the vein of Rosemary’s Baby and The Exorcist,” and the dark visuals and spooky singing in the teaser definitely make good on that horror-movie vibe.

Clearly taking its cues from the CW’s Riverdale (the show’s producers are also running the ship here), the preview shows Kiernan Shipka’s Sabrina running through the woods, preparing to blow out the candles on her birthday cake, and locking lips with Harvey Finkle (Ross Lynch) — all to the tune of a spooky version of “Happy Birthday.” We also see brief flashes of a creepy fog, Satanic rituals, some otherworldly possessions, and what appears to be the devil himself.

Although details are scant, iO9 says the show will open around Sabrina’s 16th birthday, when she has to decide between becoming a full-fledged witch by joining a coven and signing “The Devil’s Book,” or leaving her birthright behind and becoming a mortal in order to stay with Harvey and be a normal high school student.

Will you be checking out Chilling Adventures of Sabrina? Let us know @BritandCo!

Kat Armstrong
Kat has been a writer, social media maven and mom for longer than she's willing to admit. She's also spent time in front of and behind the camera, interviewing celebs, politicians and acting as a producer for fashion and artistic photography shoots. When she isn't writing for various orgs and publications, she's hanging with her kids, husband and French Bulldog, Peter, in Toronto, Canada.
Fall TV
TV
Fall TV TV
More From TV