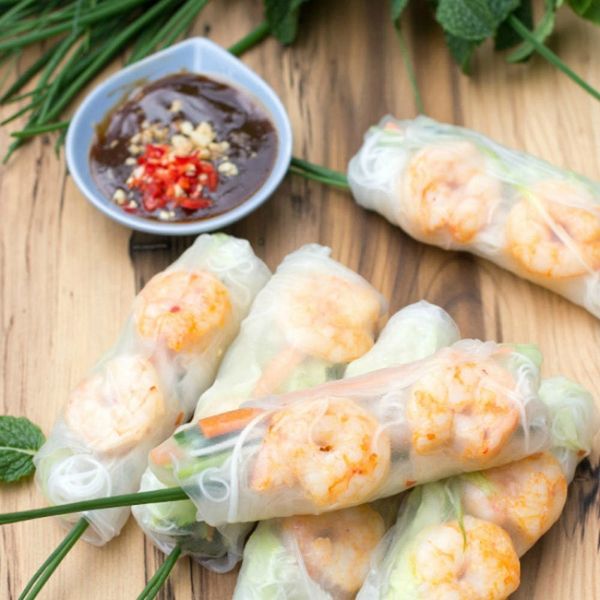 When the days are short and the temperates are low, your body tends to crave comfort food while you hibernate. There’s nothing like calling your favorite Chinese takeaway spot and curling up on the couch with a big dish of Chinese noodles, a rice bowl or spicy General Tso’s Chicken during this time of year. BUT, since today is the beginning of the Chinese New Year celebration, it’s time to take it up a notch in the dinner department with some homemade goodness. Not only will you celebrate in style, but you’ll save some money and eat healthier. Check out the delish recipes below to think outside that Chinese takeout box.

Are chicken lettuce wraps a must-have when you eat at a Chinese restaurant? This version is high in protein and packed with veggies for an extra-satisfying lunch or dinner. (via Daily Burn)

Egg rolls are always a win, but if something is deep fried, it doesn’t constitute being healthy. Go for a fresh spring roll instead. They’re easy enough to make at home, and if you rip the first couple of rice paper wraps, don’t fret — those are for taste-testing! (via Grab Your Spork)

Put your spiralizer to good use by turning zucchini into the base of this Chinese favorite. Serve it up to share, or save leftovers for tomorrow’s lunch. (via Skinnytaste)

If you’ve only cooked with traditional Italian eggplant before, all you need to know is Chinese eggplant is easier, sweeter and more tender than its Italian cousin, and can be cooked without peeling or salting. You’ll want a big bowl of brown rice to soak up all the delicious sauce from this recipe. (via The Iron You)

There’s nothing better than coming home to a warm bowl of soup on a cold day. Be sure to drizzle a bit of chili oil before serving for a little extra oomph. (via Pür Body Nutrition)

You might become best friends with the people at the fish counter at your grocery store after making this recipe. Use a bamboo steamer to cook a fresh ocean fish stuffed with herbs for a main dish that looks and tastes fancy but is still healthy. (via Stranded on the Island)

Get dinner on the table in less time than it would take the delivery guy to arrive at your house with this take on traditional Chinese steamed fish. You don’t even need to marinate the fish beforehand, so prep time is even faster. (via Omnivore’s Cookbook)

Being a vegetarian doesn’t mean you can’t eat the deliciousness that is General Tso’s. Swap out the chicken for cauliflower and even carnivores won’t miss the meat! (via PureWow)

Turn your afternoon snack of cucumbers and hummus into a refreshingly light cucumber salad. Enjoy these with a glass of iced green tea for the ultimate pick-me-up. (via Thirsty for Tea)

If you’re looking for a vegan and gluten-free Chinese dish, look no further than this delicious bowl. Cabbage might become the It-vegetable of 2016 once you turn it into tasty noodles. (via PopSugar)

Swap your cold leftover Chinese takeout for a hot, healthy and satisfying traditional Chinese breakfast instead. Start with a savory base made from rice, mushrooms and garlic, then go crazy with toppings like edamame, cilantro, peanuts and, of course, Sriracha. (via It Doesn’t Taste like Chicken)

No one will have a problem finishing their veggies with this dish. Brussels sprouts are roasted, tossed in a sweet and tangy kung pao sauce then dressed with peanuts, red pepper flakes and green onions for the ultimate Chinese side dish. (via Cookie and Kate)

Grab some Chinese take-out cartons at your local craft store to get the real feel of Chinese takeout. Pour this high-protein, low-carb dish into the containers and settle in for a Netflix marathon of your choosing. (via BlogHer)
From Your Site Articles
Cassandra Pisone
Cassandra is a San Francisco-based marketer by day and blogger by night (and weekend!). You can usually find her running, surfing, hiking, eating or at the yoga studio when she's not working - or planning her next adventure.
Dinner Recipes
Recipes
Dinner Recipes recipe roundup
The Conversation