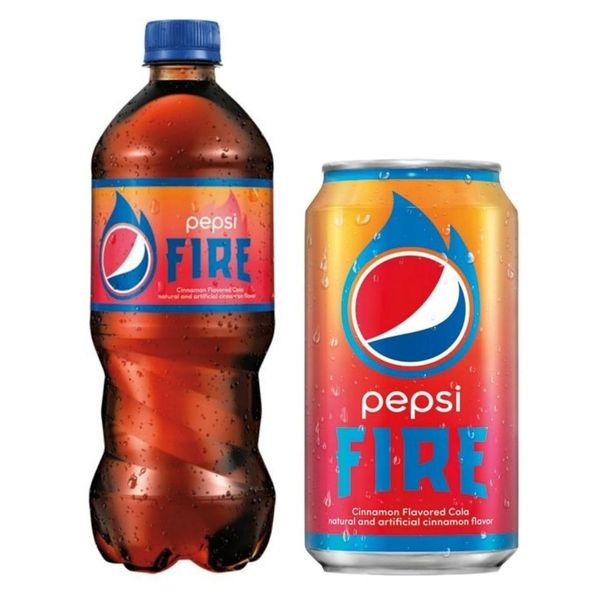 Pepsi is forging ahead after that super controversial Kendall Jenner ad (*cringe*) by introducing a brand new flavor that’s sure to heat things up in a totally different way. First appearing as a new Slurpee at 7-Eleven (with some pretty unfavorable reviews, TBH), pics of the brand’s newest offering started popping up in cans on social media, prompting the brand to confirm that, yes, Pepsi Fire is real, and will soon be released nationwide by both the can and bottle come May 22.

Hoping to be the “hottest drink of the summer” and telling you to “Get It While It’s Hot™,” Pepsi doesn’t just mean “hot” in the figurative sense: They’re apparently trying to spice up your life with this cinnamon-flavored cola. “Summer is one of the most anticipated times of the year, and Pepsi Fire is going to ignite this season with an unexpected and spicy twist to our classic cola taste,” said Pepsi’s Director of Marketing Lauren Cohen.

However, there’s another twist to this release (other than the newly designed bottles). Cohen added, “We know Pepsi fans love spending time on Snapchat, and we are excited to offer them a chance to Snap their way to one of one-thousand gaming consoles, a trip to Lollapalooza or a CONAN show meet-and-greet.”

That’s right; “Snapchatters” can take advantage of a Snapcode on Pepsi Fire’s packaging in order to unlock a mobile game and be entered into a sweepstakes where, every day, 10 lucky people will win prizes like new gaming consoles, festival fly-away experiences, and even a chance to attend a taping of TBS’s CONAN.

While we’re still admittedly skeptical after that Slurpee feedback, all of this seems like as good of a reason as any to give Pepsi Fire a try. Fingers crossed it’s as good as they claim!

What do you think about the idea of the cinnamon-flavored Pepsi Fire? Let us know @BritandCo!

Desiree O
Desirée O is a ‘Professional Bohemian’ who loves anything and everything related to the arts, entertainment, and pop culture. She ADORES being a ‘Newsy’ for Brit + Co, covering all of the latest tidbits of awesomeness that you want to read about. When she’s not writing, she’s either making messy art, going on long adventurous walks with her camera, or poking around over at bohemianizm (http://www.bohemianizm.com/). You can find out about Desirée O and her work at http://DesireeO.com/ or follow her on Twitter @DesireeO.
Drink
Food News
Drink
The Conversation
More From Food News