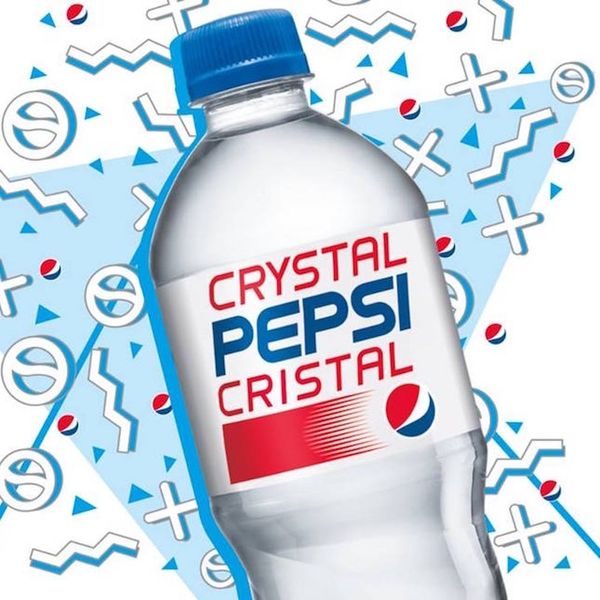 When Pepsi announced it would be bringing back its short-lived clear replica drink, Crystal Pepsi, from the early ‘90s junk food grave for a limited time this summer, the nostalgia machine went into a frenzy. After all, everyone loves a novel reminder of pop culture past. But Crystal Pepsi fell flat when it was first released, lasting in stores for only a year. Most of the Twitter jokes about its re-release even made fun of this. Pepsi just brought back an item that people didn’t even like to begin with because it’s associated with the ’90s.

#CrystalPepsi all the burn of gasoline with the great taste of cough syrup minus the codeine.

Originally released in 1993 as a play for consumers’ obsession with health and “purity,” Crystal Pepsi was touted as a clear, caffeine-free alternative to other colas on the market. It was supposed to taste the same as regular Pepsi, but critics of the product were disappointed. Despite how cool it looked, the obvious jump on the health bandwagon ultimately flopped. Then, because you can find a devout audience for everything on the Internet, Pepsi responded to Crystal’s cult following’s demands for a comeback in December 2015 with a contest to win some via the Pepsi Pass rewards app. And now, for two months this summer, Pepsi will put the product back in stores for everyone else.

We’re major a fan of revivals, fawning over Fuller House, Lisa Frank adult coloring books and Ghostbusters remakes on the regular. But if we’re being honest, the marketing around Crystal Pepsi’s comeback sounds like a neon-drenched ‘90s nightmare.

Accompanying the release is a video game called The Crystal Pepsi Trail — Pepsi’s take on the classic computer game The Oregon Trail — where the goal is to collect as many ‘90s items as possible. Here are the retro toys, clothes, shows and more included in the game: the song “Whoomp! (There It Is),” dial-up Internet, Tamagotchi, Furby, pagers, bucket hats and Marc Summers (former host of Nickelodeon’s Double Dare). Phew. It’s all a little too much.

The game’s site launched today and, true to the era, its design is all ancient animated GIFs, webrings and website guestbooks. We get it guys: You remember the ’90s.

So why are we so grumpy when you know we LOVE that storied decade of our childhoods? Well Crystal Pepsi was gross; it’s probably why Pepsi made the decision to pull in 9,000 other distracting ’90s symbols into the marketing tactics for this re-release. But it also feels misguided, disjointed and out of touch. Is anyone else picturing Steve Buscemi trying to fit in as a teen in 30 Rock?

Using people’s memories and the emotional attachment that comes with them is undoubtedly an effective approach. It’s why ‘90s revivals are serious business right now. But even with Pepsi’s undeniable place in pop culture, grasping at every sentimental straw can’t help but make it feel like Pepsi has done the unthinkable — they’ve gone and done the ‘90s to death.

Will you try Crystal Pepsi? Let us know over at @BritandCo!