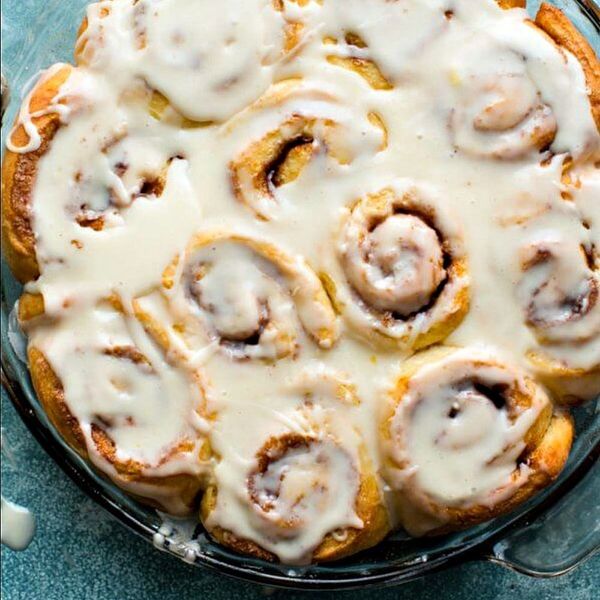 What pairs better with a steamy cup of coffee than a sweet and delectable cinnamon roll? Not much, friends. Tie on your apron, because we’ve got 12 mouthwatering recipes that will have you running to the kitchen immediately.

2. Easy Orange Sweet Rolls: A punch of bright citrusy goodness can do wonders for the classic cinnamon roll, and this recipe proves it by bringing oranges to the mix. (via Sally’s Baking Addiction)

3. Pandan Black Sesame Rolls: If you’re feeling adventurous, these Thai-inspired cinnamon rolls are a *must* with the inclusion of pandan essence and black sesame seeds. (via More Icing Than Cake)

4. Carrot Cake Cinnamon Rolls: Carrot cake lovers are going to lose their collective minds over the soft and fluffy cinnamon rolls that carry out the warming essence of their fave dessert. (via Katiebird Bakes)

5. PB & J Cinnamon Rolls: This recipe brings a childhood favorite to the cinnamon roll by incorporating jelly into the filling and PB into the frosting. (via KJ and Company)

8. Sweet Potato Cinnamon Rolls With Blueberries and Orange Glaze:Sweet potatoes never cease to amaze us, and the use of them in these scrumptious cinnamon rolls along with blueberries is exactly why. (via The Floured Kitchen)

9. Baklava Cinnamon Rolls: One of the *best* desserts of all time is folded into these surprisingly easy cinnamon rolls with crunchy walnuts and orange blossom water. (via Thyme and Toast)

10. Cardamom Rolls With Almond Glaze: These technically aren’t “cinnamon rolls,” but they’re everything our cinnamon rolls WANT to be with a filling made up of sweet cream butter, cardamom, and sugar, while almond extract infuses the glaze. (via The Modern Proper)

11. One-Hour Homemade Cinnamon Rolls With Cream Cheese Frosting: If you’ve got an hour, then you’ve got time to make these heavenly classic cinnamon rolls right from scratch. (via Averie Cooks)

Dana Sandonato
Born in Canada and now living in the beautiful state of North Carolina, Dana is a coffee-reliant food writer with a healthy appetite, a taste for culinary adventure, a thirst for good beers, and an endless hunger for food photography. When not writing for Brit + Co, she can be found pouring herself into her blog-turned-webzine, Killing Thyme, or taste-testing at local breweries with her husband. Dana's ideal down time includes pizza, marathoning on Netflix, or watching her fave flicks from the 80s and 90s - no matter how great or awful they are!
Breakfast Recipes
Recipes
Breakfast Recipes Brunch Recipes recipe roundup
The Conversation