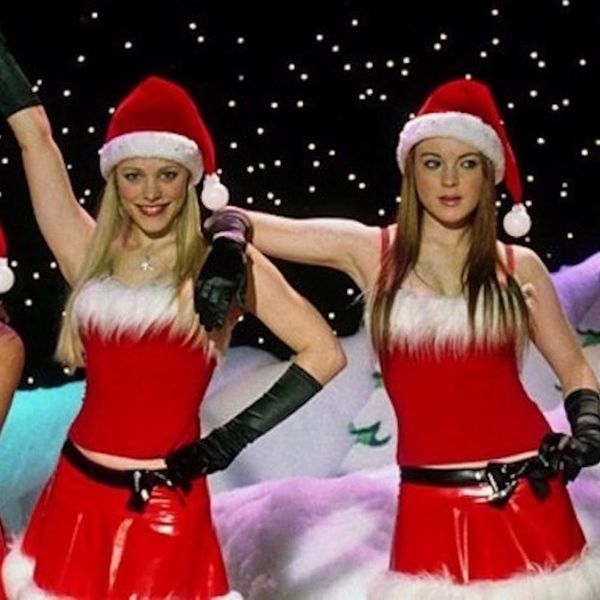 The office holiday party is an awkward social occasion where you’re expected to have fun, but not TOO much fun… otherwise, you’ll find yourself pulling a Bridget Jones and singing solo karaoke. Making a fool of yourself during the Christmas party at work is something that you want to avoid at all costs, and where better to learn how NOT to be an embarrassment than from our favorite movies and TV shows. Whether you’re trying to decide if it’s time to pull out the ugly sweater or you’re considering telling your crush how you feel about them à la The Holiday, here are 16 holiday party etiquette rules that will keep you off Santa’s (and HR’s) naughty list.

1. Don’t hide out at the food table or bar. Everyone loves free food and an open bar — although probably not as much as Michael from The Office. But instead of hiding out and stuffing your face, make sure you step away from the food and engage with your colleagues. No matter how crazy they are. (Photo via NBC)

2. Make sure your gifts are appropriate. Poor Iris is the perfect example of what NOT to do at a work party. While you’re busy socializing, remember to keep things professional. If there is a gift exchange, make sure you stay in budget and keep things workplace appropriate. (Photo via Sony Pictures)

3. Attend AND be present. Harry might be a wizard, but his social skills are nothing to write home about. So you got yourself there, but now you should at least make some attempt to mingle, chat and compliment the boss on his tie. Be a team player, turn on that winning smile and acknowledge all your co-workers — especially your superiors — and start the new year off on a good foot. (Photo via Warner Bros.)

4. Get out of your comfort zone and get to know new people. Bridget Jones is the best example of putting yourself out there and getting to know the newbies, even if the only thing you have to go on is matching horrible sweaters. The Christmas party is an awesome opportunity to cement relationships and get known in a good way. (Photo via Universal Pictures)

5. Don’t destroy the holiday cheer by talking shop. The hardest thing in the world is for Leslie Knope NOT to talk about work — the lady doesn’t know the difference between work and personal life. But at the Christmas party, it’s totally allowed to brag about your fur babies and chat about your gingerbread-making skills. (Photo via NBC)

6. Ditch the gossip. Remember this super awkward scene from Grey’s Anatomy where Bailey’s dad accuses her of being a terrible mother in front of all her co-workers?? If you’re bringing a BFF or S.O. to the office holiday party, make sure you don’t bring up any dirty laundry and just leave the icky gossip at the door. (Photo via ABC)

7. Don’t forget to thank the host. Monica nearly killed herself making enough candy for all the neighbors, and her efforts went generally unacknowledged… as usual. Mind your manners and make sure to acknowledge all the effort your host put into the holiday party. Especially if you’re sneaking out early, wink wink. (Photo via NBC)

8. Watch your alcohol intake. It’s easy to forget you’re still at work (hello open bar), but your boss is still your boss, so try to avoid a Bridget Jones scenario. Everything you do has the potential to be turned into a judgement-fest, so treat the party as an extension of your work day, eat something beforehand and drink plenty of water. (Photo via Universal Pictures)

9. Don’t be clique-ish. Yes, it’s tempting to stick around the people you’re actually friends with, but take a tip from Mean Girls and avoid hanging out in cliques at the office party. After all, you don’t want to find out your clique is the plastics. (Photo via Paramount Pictures)

10. Be careful about declaring your undying romantic intentions. Relationships in the workplace can be a touchy affair, but take a tip from Love Actually and don’t choose the holiday party to make a move on your crush. Use your common sense to factor in how much you’ve had to drink and whether you’ll regret it in the morning. (Photo via Sony Pictures)

11. Arrive on time. The rule “fashionably late” doesn’t apply here, even if you’re Mindy and have a million outfits to try on first. Make sure you’re on time. It gives you the opportunity to say hello to everyone and still get out early (#goals) without being rude. (Photo via FOX)

12. Participate in fun social activities. Your participation shows you’re a team player who cares about your co-workers on more than a work level. Even if you’re as AWKWARD as Sarah Jessica Parker playing charades in The Family Stone, don’t miss out playing games, singing karaoke and engaging in the white elephant gift exchange. (Photo via 20th Century Fox)

13. Keep the conversation positive and upbeat. Rather than dreading the occasion, take a tip from Buddy and prepare yourself with plenty of positive chit chat. Regardless of how you feel about the office, holiday parties are a crucial part of the office dynamic, and if you make the best of it, it’ll be over before you know it. (Photo via New Line Cinema)

14. Dress appropriately for the workplace. Decide what to wear, or better yet, find out what everyone else is wearing before the party and match the tone with your outfit. You don’t want to be over- or (worse) underdressed like Schmidt in New Girl! (Photo via FOX)

15. Share your experience on social networks after the party. Since you’re staying sober(ish), keep yourself entertained by documenting the occasion and sharing the pictures with everyone afterward. If your office is participating in a Secret Santa Fun Swap like Kenneth from 30 Rock, you’ll DEF want plenty of photo documentation. (Photo via NBC)

16. Bring someone who puts you at ease (if you’re asked to bring a guest). If possible, team up with a party buddy who will watch out for you while you watch out for them. This is the friend who will make sure you don’t drink too much, don’t hit on your crush and… “where you lead, I will follow!” (Photo via CW)

Looking for more tips on how to survive the season? Follow us on Pinterest for more DIYs, recipes and decor ideas to make this the best holiday ever.

Kate Thorn
Kate Thorn is an illustrator, foodie, photographer, and blogger at Create & Kate. She loves creating art, traveling, and all things chocolate. A native to the Great Northwest, she is currently living in London and pretending to be a mature grad student.
Holiday Party
Work
Holiday Party Office work