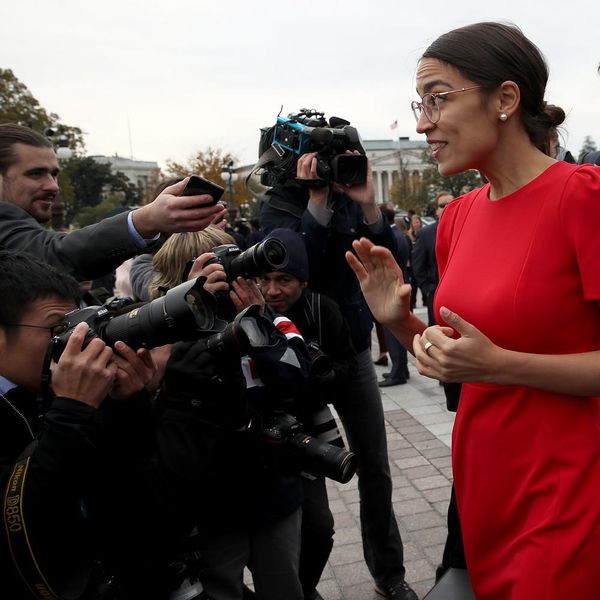 House Representative-elect Alexandria Ocasio-Cortez has had an interesting arrival in Washington this week. With new member-elect orientation and other pre-inauguration meetings to attend, Ocasio-Cortez is attempting to get the lay of the land. As with previous obstacles she’s admitted to facing, the 29-year-old New Yorker tweeted that she’s encountered a new kind of hurdle: a case of mistaken identity in the Capitol.

“People keep giving me directions to the spouse and intern events instead of the ones for members of Congress,” Ocasio-Cortez tweeted on Wednesday, adding the face-palm emoji.

When she officially joins Congress in January, the Democratic Socialist will be one of the youngest people ever elected to the House of Representatives. She’s also one of this year’s biggest political stars. She has more than one million followers on Twitter, and just searching her name yields hundreds of results on Google.

Of course, as hundreds of new staffers descend on the halls of Congress, the identity mixups may simply be a byproduct of busy staff feeling overwhelmed and trying to maintain some semblance of decorum. But, as Ocasio-Cortez herself has pointed out, sexism and ageism dogged her entire campaign.

“Sexism, I think … informed a lot of the way this political machine reacted to me, and I used it to my advantage,” she told Rolling Stone in early October. “‘She’s uninformed, she’s young, she’s naive, she’s nothing to worry about’ — I was ignored for 99.9 percent of my campaign, and I liked it that way.”

Since arriving in the Capitol, though, the upstart has already made waves. On Tuesday, Ocasio-Cortez attended a rally to pressure House Minority Leader Nancy Pelosi to do something more drastic about climate change. “Should Leader Pelosi become the next speaker of the House, we need to tell her that we’ve got her back in showing and pursuing the most progressive energy agenda that this country has ever seen,” she said to protesters, adding later in the day that she is excited to work with Pelosi on making massive strides in climate protection.

With a start like that, it’s doubtful people will confuse her for anyone else in the near future.