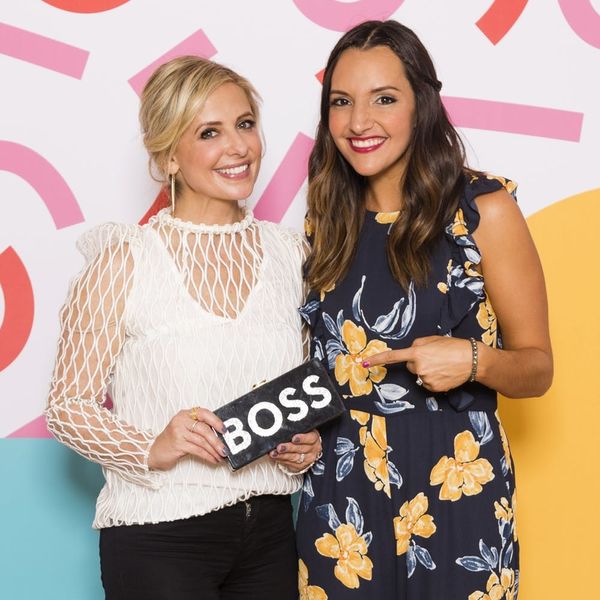 And just like that, day two of #CreateGood, Brit + Co‘s five-day pop-up in New York City, is over. Tonight’s highlights were all about the HBIC — that’s right, boss women who have started companies and careers from an idea. Our speakers included actress and Foodstirs founder Sarah Michelle Gellar, 13-year-old lemonade maker Mikaila Ulmer, and Zuckerberg Media’s EIC Randi Zuckerberg, to name a few.

Here are our top five highlights from tonight’s program of panels, workshops, and general goodness. Don’t forget to check us our at 437 Broadway in SoHo, Manhattan from 11:30AM to 4:30PM October 4-8.

1. Randi Zuckerberg burst into song onstage (Yes, really!). Randi Zuckerberg might have been the mastermind behind the oh, so popular Facebook Live, but back in the day, the girl boss had dreams to be on Broadway. However, after a rejection from Harvard’s music department, Zuckerberg set off on a path that led to Silicon Valley to work for Facebook — or The Facebook, as it was known at the time.

With the success of Facebook Live and an increasingly complicated relationship with Silicon Valley (“I was the only woman in the room for pretty much 10 years.”), she left Facebook and founded Zuckerberg Media, and eventually even became a children’s book author. Her character Dot, whose aim is to keep girls in STEM, is now also the star of a TV show that’s shown in 33 countries on Hulu and NBC. And her tale came full circle: Broadway’s Rock of Ages came calling and Zuckerberg got to fulfill her dream of singing onstage — which she did again tonight with her own clever, high tech renditions of The Little Mermaid‘s “Part of Your World.” The best line? “Out where they date, date as they should. Somewhere where Tinder means only wood.”

2. Mikaila Ulmer taught us the importance of dreaming like a kid. Mikaila Ulmer might only be 13 years old (she just celebrated her birthday!), but her mantra is one we can all live by: “Be fearless and dream like a kid.” Ulmer’s lemonade brand, Me & the Bees, started from a personal passion (her lemonade stand) and led to the shelves of Whole Foods — and it’s thanks to her ability to dream big, plus her family’s encouragement, that allowed her to “be brave and courageous and conquer [her] dreams.”

3. Sarah Michelle Gellar revealed just HOW she scored the role of Kathryn in Cruel Intentions. While playing vampire-slaying the superhero protagonist of Buffy the Vampire Slayer, Gellar got the script for Cruel Intentions. Everyone told her to go for the role of innocent Annette, but the actress really wanted the role of conniving Kathryn. Her management at the time told her, “You’ll never work in Hollywood again,” but Gellar wasn’t willing to take no for an answer. Instead, she went shopping. She bought provocative clothing and began showing up anywhere and everywhere the producers and director of the film would be — in her words, “I was so determined. You have to make it so that the only answer is yes.” And yes it became.

Now, as the founder of her own baked goods company Foodstirs, she’s channeled that same fearlessness in growing and expanding her company. When Target agreed to stock one of Foodstirs’ products in their stores, Gellar became determined they would stock two: their pumpkin chocolate chip pancakes. “I made the pancakes in the meeting. I’m gonna show you how easy it is to make this,” she told the crowd at #CreateGood. “They said, ‘Oh, they’re not gonna take it.’ I said, ‘Oh, I’m not leaving until you take it.’”

4. There was a Shark Tank-style sesh where entrepreneurs gave their elevator pitch to a panel of venture capitalists. In keeping with our theme of the evening, #CreateGood Business, we brought two entrepreneurs onstage to give their best two-minute pitches to a panel of VCs: Hayley Barna of First Round Capital, who was a co-founder of Birchbox; Soraya Darabi, the founder of Trail Mix Ventures; and Susan Lyne, the managing partner at BBG Ventures.

5. The New York Times’ COO Meredith Levien revealed her greatest failure. In a panel moderated by CNN’s Editor-At-Large Laurie Segall, two media powerhouses — Meredith Levien of The New York Times and Jessica Lessin of The Information — chatted about their greatest failures. Lessin said hers was, “As a journalist, sometimes you miss the story. There have been a lot of tech stories I wish I’d gotten to that I hadn’t.” Another regret she had in the process of building her company was finding the right talent. “There have been times on that journey I hired the wrong person, and I had to help that person along,” she said. “You certainly learn a lot from those experiences.”

As for Levien, her greatest failure? “Most of the failure I’ve personally been a part of is not standing for change fast enough.” With a career that went from offline to online, analog to digital, some of the greatest learning moments were when and how quickly to embrace change.

We’ll be back tomorrow with our theme #CreateGood Style, with fashion legend Iris Apfel, stylist extraordinaire Stacy London, and designer Rebecca Minkoff. You don’t want to miss it!

Kimberly Wang
Kimberly Wang writes about all things pop culture, tech, style, and beauty. She's a Bay Area transplant and has an MFA in Creative Writing from Columbia University. On a sunny New York day, you can find her hanging out with her mini schnauzer Isabelle Jellybean on a blanket in Central Park.
#CreateGood
Creativity
#CreateGood
More From Creativity