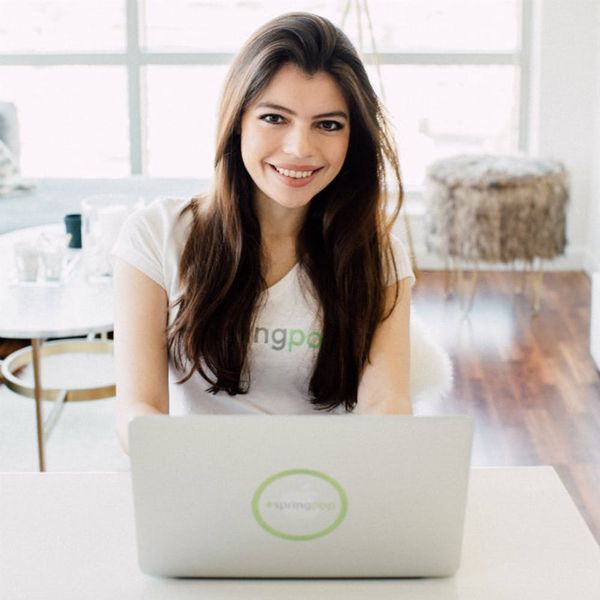 When Alex Pierson was a sophomore in college, she decided she was fed up with negativity. A student at the University of Pennsylvania, Alex had seen firsthand the damaging effects of poor mental health on campus and realized people’s obsession with getting validation from social media wasn’t helping anyone. “I didn’t really have a social network to turn to where I could find something uplifting. I wanted to start waking up to something that was positive,” she says, rather than the curated Instagram pics that invoked jealousy or upsetting national news alerts that filled her screen.

An intro class to positive psychology, a branch of psychology that studies happiness, offered Alex the last bit of inspiration she needed to finally create something that would help lift the spirits of those around her. The course took a deep dive into topics like mindfulness practices, positivity exercises and the intersection of media and psychology. Alex’s primary takeaway? “Injecting someone’s day with positivity can have a big outcome.”

Within a few months, Alex had gotten to work on Springpop, an app that seeks to provide users with motivational quotes and positive articles each morning. While Alex had a clear vision for the platform, the execution proved to be a challenge. Just 19 years old at the time, she didn’t have a background in engineering, development, or web design. Alex sold her car in order to cover the cost of an app developer in New York City, taught herself to use Adobe Illustrator and worked on the design herself.

In the summer of 2016, two years after the project began, Springpop finally launched in the app store for free. Now in her last semester at Penn, Alex is able to devote the majority of her time to the startup, which she runs largely on her own (we’re so impressed). Her go-to supporter is her twin sister Daniella, who launched her own startup, a fashion and beauty email newsletter called The Newsette, at roughly the same time. “She really understands what I’m going through,” Alex says. “She’s the first person that I call if I have a problem or any questions.”

Despite the stress that comes with running a business (before college graduation), Alex is thrilled with the way Springpop is evolving. Users receive five posts in the app each morning. The posts, which are curated by the Springpop team, as well as users who have opted to be content creators, can be anything from motivational quotes to insights on healthy living to inspirational stories of people rocking their professional fields.

Two familiar elements are noticeably absent from the network: likes and follower counts. “People are so obsessed with how many followers they have and how many likes they get,” Alex says. “I thought it was a superficial way to judge content quality.” On Springpop, content creators can access a general quality ranking for their posts, but more specific analytics remain hidden.

This de-emphasis on stats and likes is one of many ways that Alex hopes Springpop will help foster creativity within its community. “Creating something new is a vulnerable process,” she says of both her own work and the contributions of her content creators. “Springpop’s mission is to help a creator feel motivated. The app gives them a positive outlet, and we don’t give other people the opportunity to be negative toward them,” she explains.

Positive psychology continues to inspire Springpop and the way it approaches creativity. Alex says the class taught her that there is a strong correlation between positive mental health and not only happiness, but also creativity and motivation. “Hopefully, every morning, I have those same users who are waking up to something positive and then coming back for more,” she says. “When you’re in a positive mindset, it leads you to create.”