You’ll Never Believe the Stories Behind These 14 Airbnbs 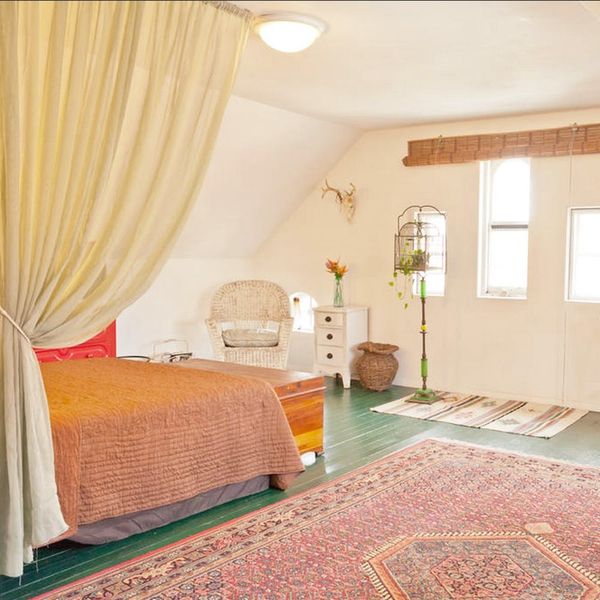 Calling all art and history aficionados! Would you like to spend a night in what was once Charles Dickens’ workspace? How about a week on the first street ever built in the United States? For your next getaway, we’ve found 14 Airbnbs that have had a major impact on history and culture. They’ll take you back in time as well as around the world. Bon voyage!

1. Elegantly Decaying Creole Mansion: Located in the famous Tremé neighborhood of New Orleans, this opulent mansion will take you back to the 19th century when a Supreme Court Decision allowed owner Louise Vitry, a free woman of color, to keep her house prior to the Civil War. Enjoy the tropical backyard garden filled with Spanish moss and fountains, or walk over to the French Quarter for a taste of what NOLA is really about.

2. John Steinbeck’s Writer’s Studio: This charming little cottage served as John Steinbeck’s writing studio in the early 1940s when he wrote The Sea of Cortez. Located in Pacific Grove, CA, bordering Monterey Bay and the Del Monte Forest, the studio features the original 1920s architecture, which includes low ceilings, so watch your head if you’re tall. Take the half-mile walk to the Monterey Bay Aquarium and Cannery Row, the subject of another one of Steinbeck’s books.

3. The Birgitte Suite at Broholm Castle: If you’re visiting Denmark, stay in luxurious comfort at Broholm Castle, which features a breakfast buffet and scenic landscape complete with a lake, forest and beach. It’s the rumored birthplace of Hans Christian Andersen, so you can bet that the famous author spent a lot of time here. Explore the surroundings to see what might have inspired The Little Mermaid.

4. Dumas’ Paris Apartment: This stylish, modern apartment is ideally located in the center of Paris, not far from the Eiffel Tower, the Louvre and Moulin Rouge. Its location may have been the reason why Alexandre Dumas, author of The Three Musketeers and The Count of Monte Cristo, chose to live here so long ago.

5. Colter Farm: With 27 acres overlooking the Blue Ridge Mountains in Stuarts Draft, VA, this farm and 1770s farmhouse is the presumed birthplace of John Colter, a scout who traveled with the Lewis and Clark Expedition and the first non-Native American to discover the thermal activity in Yellowstone Park. This surprisingly massive home is surrounded by an orchard, gardens and trees, and it’s close to the many breweries and vineyards that make Virginia worth exploring.

6. Los Angeles Area Rancho Equestrian: Built in 1938, this house, which was home to Ava Gardner and her second husband, Artie Shaw, was last renovated in 2011. With a full library, a horse stable and fully equipped musicians’ room, this house offers a relaxing getaway for equestrians, musicians and anyone looking for a little R&R.

7. Garden Gingerbread House: This 1930s cottage located on a gated property in Makawao is everything you could ever want in a charming hideaway. Situated on 4.5 acres of property filled with a vegetable farm, fruit trees of all kinds, coffee plants and avocado trees, this cottage hosted Jimi Hendrix in the 1970s when he stayed in Maui to film Rainbow Road. It won’t take long for you to see why Hendrix chose to stay here.

8. San Francisco Studio Apartment: Located in sunny Potrero Hill, the home that houses this garden studio apartment was where science fiction writer Frank Herbert wrote most of his book Dune, in the 1960s. Even if you’re not a sci-fi fan, this apartment is an affordable place to stay while exploring everything San Francisco has to offer.

9. Dickens’ Light and Lofty Apartment: Head to London to stay in this quaint one-bedroom apartment that was once the workspace of Charles Dickens. In this modest apartment, Dickens founded his magazine All the Year Round, which he used to publish most of his stories.

10. Morada Lane: Taos, NM has a reputation as an inspiring getaway for creatives, and this house was once a gathering place for many well-known artists. Book a stay in this enchanting pueblo and you might see what inspired Ansel Adams, Georgia O’Keefe and D.H. Lawrence to spend so much time here creating masterpieces.

11. Frank Lloyd Wright’s Schwartz House: Stay in this work of architectural art in Two Rivers, WI. Designed by Frank Lloyd Wright for LIFE magazine’s 1938 “Dream House,” this sprawling mansion has two fireplaces and a private dock ideal for fishing. Who knew your newest dream vacation would be in Wisconsin?

12. The Bellows’ Studio Loft Apartment: Tucked away in Columbus, OH, this loft apartment is in American realist painter George Bellows’ garden-surrounded home. Within walking distance to downtown Columbus, including the art museum and Topiary Park, the bright and airy apartment offers a comfortable place to stay while exploring this low-key city.

13. House 137 on Elfreth’s Alley: There are plenty of landmarks in Philadelphia that will make you feel like you’ve entered another era. Take your adventure through history to the next level with a stay on the oldest street in the county, Elfreth’s Alley. The grandson of the street’s namesake built House 137 in 1789, the year the post-revolution Constitution went into effect.

14. Aldous Huxley Eco-Cabin: In San Cristobal, NM, this log cabin is located on a goji berry farm high in the Sangre De Cristo Mountains. Equipped with a wood-burning stove, this eco-cabin is a cozy place to hide away and write, which is exactly what Aldous Huxley and D.H. Lawrence did when they lived here. Take a walk around the farm, pick apples in the orchard and marvel at the farm’s miniature goats.

Are you planning a cultural vacation with tons of history to explore? Let us know where you’re headed in the comments below!

Amanda DiGiondomenico
Amanda is a freelance writer and graphic designer who blogs about living a stylishly nerdy life at The Spendicate. A lifelong resident of Baltimore, MD, Amanda is an art school dropout, who managed to earn a masters degree in nonfiction writing. On the weekends, she's an expert guacamole maker, a novice jogger and an intermediate yogini.
Airbnb
Home News
Airbnb
More From Home News