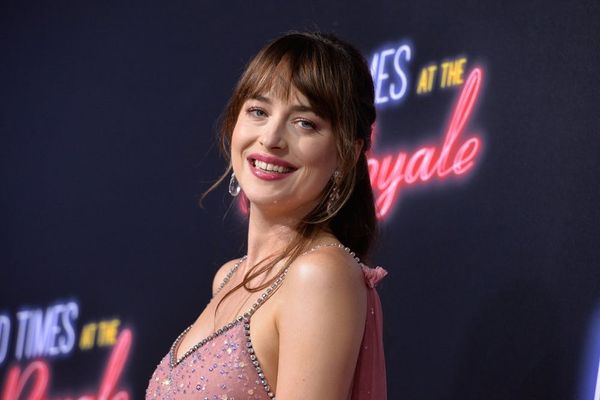 Dakota Johnson has a busy fall lined up on the big screen, with starring roles in both Suspiria and Bad Times at the El Royale, but the actress made headlines for a totally different reason earlier this week. It was reported that she was pregnant and expecting her first child with boyfriend Chris Martin, and on Thursday, October 11, the actress addressed the rumors on The Ellen DeGeneres Show.

Welcoming Johnson to the stage, DeGeneres joked, “That is a mighty tight outfit for someone who’s pregnant. … Monday it came out that you were pregnant, so, I’m just saying. How’s that going?”

“Well, the only thing I’m pregnant with is a lot of really good ideas,” Johnson replied dryly. “But not any babies.”

The pregnancy speculation stemmed from what Johnson and her rep said was a birthday party held for the actress at Martin’s home. TMZ first reported the gathering as a star-studded gender reveal party, noting that pink and blue balloons were tied to archways, and that the string of blue balloons was released into the air, indicating that the couple were having a boy.

“I didn’t know that the balloons were going to be released; they were just in an arch,” Johnson told DeGeneres. “But I guess that accidentally happened — one of the ends got let go. But a lot of people congratulated me,” she said of the false news.

Johnson also joked that the baby rumor made for some awkward times in a totally unexpected way. “I had to be like, ‘It was just my birthday.’ Then all the people I didn’t invite to my birthday knew that I had a birthday party.”

Johnson and Martin were first linked in late 2017 when they were spotted together on several occasions. In December, it was reported that the pair were indeed dating. Neither has spoken publicly about their reported romance, including during Johnson’s appearance on Ellen, during which the actress was careful to address the Coldplay frontman only indirectly.

Did you follow the whirlwind Dakota Johnson pregnancy rumors? Let us know @BritandCo.